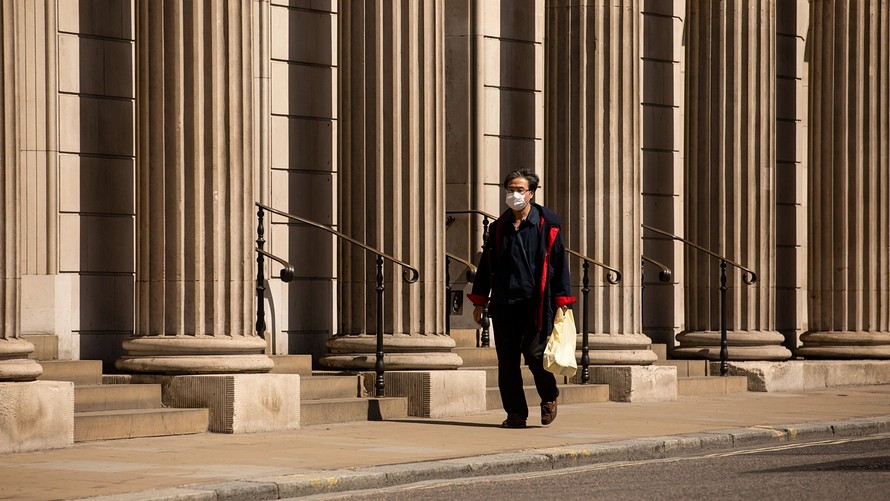 Bloomberg
A pedestrian wearing a protective face mask passes the Bank of England (BOE) in the City of London, U.K., on Wednesday, May 6, 2020.

A dire economic forecast from the Bank of England didn’t get in the way of gains for London stocks on Thursday, with rising oil prices lifting big energy names and retailers also getting a lift.

The FTSE 100 (FTSE:UK:UKX)  rose 1% to 5,912, while the British pound (XTUP:GBPUSD) erased earlier gains to trade flat at $1.2335. The pound rose initially after the Bank of England left key interest rates and its 200 billion pound ($247 billion) bond-buying program in place, but also delivered a grim economic assessment.

Analysts at Citi and elsewhere say the central bank’s pause may last as little as a month because two of the nine members of the Bank of England’s monetary policy committee wanted an extra 100 billion pounds of purchases. That’s as the central bank warned of a record recession.

“Any forecast is guesswork in these unprecedented times, but the Bank of England’s gloomy assessment concurs with my own view that forecasters are underestimating the depth of the recession in the UK and across the developed world,” said Steven Bell, chief economist at at BMO Global Asset Management.

London stocks stepped up with the rest of the world’s equities, brushing off news of another 3.2 million U.S. layoffs in weekly data, as investors cling to the hopes of a post-pandemic recovery. U.S. stocks (DOW:DJIA)   rose 1% in early trading, while the Stoxx Europe 600 index (STOXX:XX:SXXP)  gained 0.9%.

Shares of BT Group (LON:UK:BT.A)  led decliners with a 7% fall after the telecom said it would suspend its dividend until 2022 to fund a restructuring plan and deal with the pandemic. But as well, deal news depressed shares.

The retail side was also perking up with JD Sports Fashion (LON:UK:JD)  , Burberry Group (LON:UK:BRBY)  and Next PLC (LON:UK:NXT)  all up around 4%.