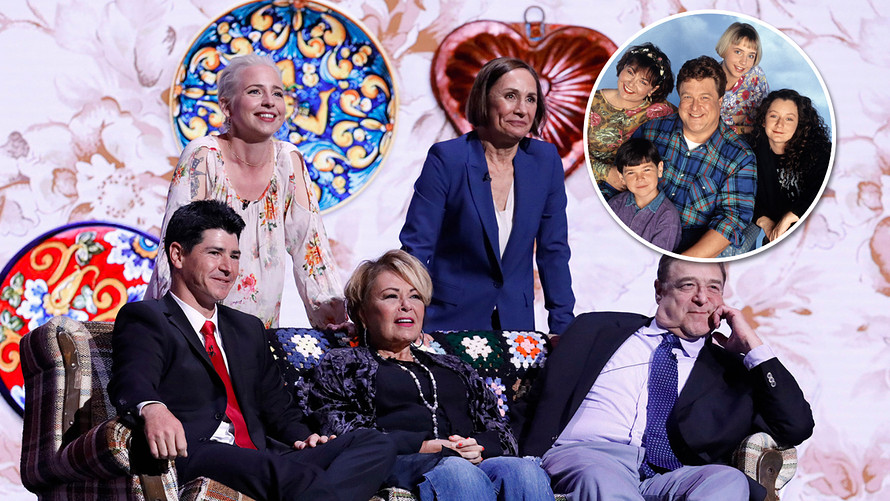 ABC, Everett Collection
During its 10-year run, ‘Roseanne’ focused on the trials and tribulations faced by families in Middle America.

Roseanne Barr’s return to the top of the ratings was a familiar feeling for the star. But it was also shockingly brief. America in 2018, it turns out, is a very different place to America in 1988. In some ways, at least. In other ways, not much has changed for many blue-collar families, many of whom have been described as President Trump as the “forgotten people.”

The 10th season of “Roseanne” will be its last following Barr’s racist comment on Twitter /zigman2/quotes/203180645/composite TWTR +3.24%  directed at Valerie Jarrett, former senior adviser to Barack Obama. The show-ending controversy in some ways highlights how much has changed — about America and Barr herself alike — since the sitcom first hit the airwaves.

The original series centered on a working-class family living in the fictional town of Lanford, Ill. When the show premiered, Roseanne (played by Roseanne Barr) was a mother of three who worked in a plastics factory. Her husband Dan (John Goodman) made his living as a drywall contractor.

Mortgage interest rates are much better for families today, but income and unemployment levels are not so different. And if she were unemployed today, the Roseanne Conner wouldn’t have a factory job to turn back to. In the show, she worked for Uber.

During its run, “Roseanne” focused on the trials and tribulations faced by families in Middle America — it wasn’t uncommon for episodes to center on having the electricity cut or scrimping to pay a child’s college tuition. “Here was a post-Reaganite economic critique with belly laughs — trickle-down sitcommery,” Ken Tucker, then a television critic for the magazine Entertainment Weekly, wrote in a review of the show’s seventh season.

Three decades after the seminal sitcom, “Roseanne,” first appeared on ABC /zigman2/quotes/203410047/composite DIS -0.25%  on Oct. 18, 1988 and became a voice of working-class Americans for a generation, it returned to become the No. 1 show on ABC. The March 27 season premiere was a hit, with 18.2 million viewers tuning in, and the revival’s full run got such good ratings ABC planned a second season .

There is a line — and Roseanne Barr crossed it Tuesday. The network withdrew support for the star with ABC Entertainment President Channing Dungey calling her tweet ”abhorrent, repugnant and inconsistent” with ABC’s values.

A lot has changed in America since 1997 when “Roseanne” aired its final episode. Mortgage interest rates are much better for families today, but income and unemployment levels are not so different, said Heather Boushey, executive director and chief economist at the Washington Center for Equitable Growth, the Washington, D.C.-based think tank founded by John Podesta, former chairman of Hillary Clinton’s 2016 presidential campaign.

So what has changed in the U.S. since the show premiered in 1988? MarketWatch breaks it down: 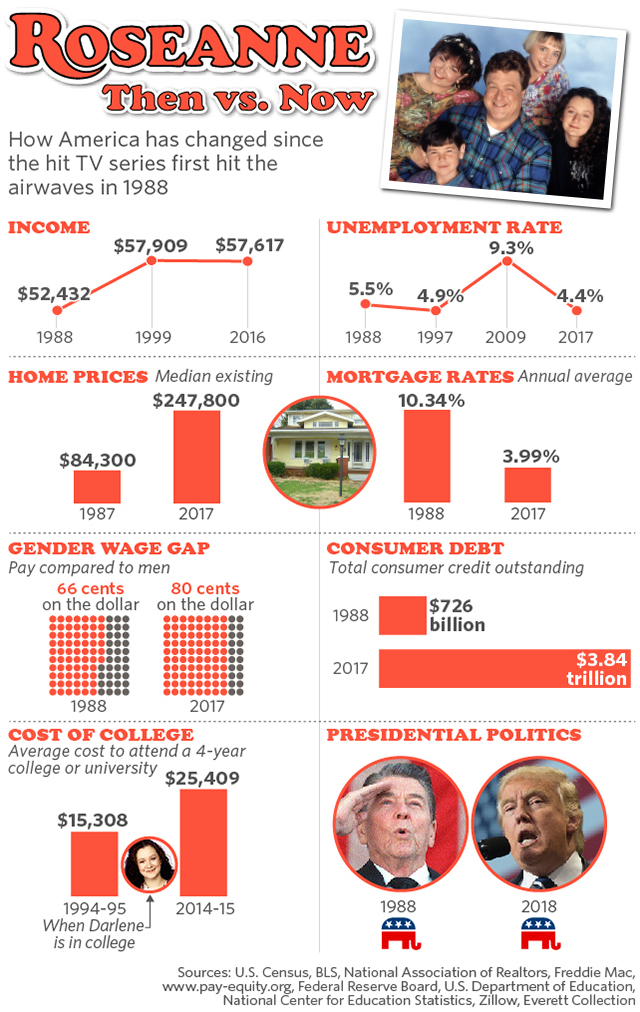 Economically, matters did not improve for the working class over the intervening years — if anything, they’ve gotten worse. These days there’s a good chance that Barr and Goodman’s characters would be out of work or making less money. The median salary for drywall installers (Dan Conner’s profession) fell from $48,000 in 1997 to roughly $41,000 today after adjusting for inflation, according to the U.S. Bureau of Labor Statistics.

As for Roseanne Conner, after leaving the factory and working odd jobs, she eventually opened a “loose meat” sandwich restaurant with her sister and a friend during the fifth season. While the idea that most restaurants close in the first year is a myth, the median lifespan for an eatery is only 4.5 years, according to a 2014 report by researchers from the U.S. Bureau of Labor Statistics and the University of California, Berkeley.

The housing market downturn would have also hit the Conner family hard. Illinois had one of the largest legacy foreclosure inventories in the country at the end of 2016 and home values have not recovered as readily in the Midwest as in other parts of the country.

If she were looking for work today, Roseanne wouldn’t have a factory job to go back to, according to John Russo, the former director of the Center for Working Class Studies at Youngstown State University in Ohio. “She’d be a contingent worker,” said Russo, also a visiting scholar at Georgetown University. “These days there’s a need to have multiple part-time jobs just to make ends meet for many people.” In the show, Roseanne Conner drove a car for Uber.

The housing market downturn certainly would have hit the Conner family hard. Illinois had one of the biggest foreclosure inventories in the country at the end of 2016, according to real estate data company ATTOM Data Solutions, and home values have not recovered as readily in the Midwest as in other parts of the country. In fact, the Indiana property used for exterior shots in the show went up for sale in 2013 at a list price of $129,000, but is now only estimated to be worth $80,374, according to Realtor.com .

Struggling to pay student debt? Here's what you need to know.

Students facing the challenge of student debt have more options than they think. Here's how to find out what your options really are.

The revived series also played to a viewership that has witnessed myriad cultural and political changes in the past few decades. “Many of these communities have been in a major period of transition both economically and demographically,” said Valerie Wilson, director of the program on race, ethnicity and the economy at the Economic Policy Institute.

Besides being groundbreaking for its depiction of class issues, “Roseanne” was heralded for showcasing actors (Barr and Goodman) who were overweight. The New York Times review of the show’s pilot included the following (cringe-inducing) line: “Together Roseanne and Dan are a fetching pair of chubbies who think, with ample justification, that they’re pretty cute.”

While these kinds of harsh attitudes to people who are overweight may or may not have changed since 1988, there’s been far more research into the effects of obesity on health and mortality. And being overweight is no longer as rare as it was in the late 1980s. While in 1990, no state had an obesity rate equal to or above 15%, these days no state has an obesity rate below 20%, according to the Centers for Disease Control and Prevention .

“Roseanne” also famously discussed LGBT issues at a time when that was still a taboo subject. Marriage equality would not become legal in any U.S. state until six years after the last episode of “Roseanne” aired in 1997. Massachusetts was the first state to introduce marriage for same-sex couples in 2003, followed by Connecticut in 2008, two decades after the first episode of “Roseanne” aired. In June 2015, the Supreme Court struck down state bans on same-sex marriage by a 5 to 4 majority as unconstitutional.

As for politics, the show skewered the conservative rhetoric of its time. In one episode, Roseanne rebuffs a politician who knocks on her door, promising to bring more employers to her town via corporate tax incentives. “So they’re going to dump the unions so they can come here and hire us at scab wages, and for that privilege we get to pay their taxes,” she quips.

As when the show first hit the airwaves, a Republican resides in the White House. But some members of the Conner clan are now far more conservative than the show’s original run.

White, working-class Americans have been credited with President Donald Trump’s electoral success, and the success of the show’s final season. Barr is an avid Trump supporter, and her character was portrayed as such, too. Roseanne’s sister Jackie, however, was shown to be a Clinton supporter who wore a pussy hat to protest Trump’s election.

But some argue that Trump has reneged on the promises he made to blue-collar voters — and that disenchantment could still play out on-screen. The show, as it turns out, focused more on the relationships within the Conner family.

That resentment, it turns out, played out in real life on Twitter.

(This story has been updated.)