The White House press secretary is defending statements that she made to the media about Comey’s firing after the Mueller report revealed they weren’t ‘founded on anything.’ 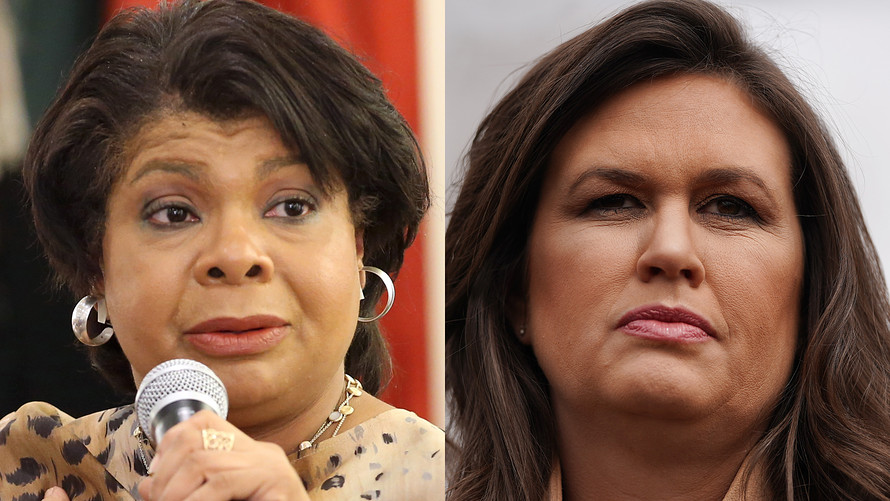 It was just a slip of the tongue.

That’s the explanation that White House press secretary Sarah Sanders is doubling down on after the redacted version of the Mueller report released Thursday revealed that her statements to the press following the firing of FBI Director James Comey were not founded on anything. And critics including April Ryan want her axed over it, with #FireSarahSanders trending on Twitter on Friday morning.

Sanders told reporters after the May 2017 firing that “countless” FBI agents had lost confidence in Comey. But she told Special Counsel Robert Mueller’s office that this statement was a “slip of the tongue” that she made “in the heat of the moment” that was not founded on anything.

“Look, I acknowledge that I had a slip of the tongue when I used the word ‘countless’ but it’s not untrue ... that a number of both current and former FBI agents agreed with the president.”

She also told George Stephanopoulos on “Good Morning America” on Friday morning that “the slip of the tongue was in using the world “countless” but there were a number of both former and current FBI agents that agreed with the president’s decision.”

“It was the heat of the moment, meaning that it wasn’t a scripted talking point. I’m sorry that I wasn’t a robot like the Democratic Party.”

And she also told John Dickerson on “ CBS This Morning” that it was a “slip of the tongue.” And that those were “Mueller’s words that they weren’t founded on anything. What I said was that it was in the heat of the moment.” But she insisted that “the sentiment is 100% accurate. The FBI is a better place without James Comey.”

Ryan, Washington bureau chief for American Urban Radio Networks and a political analyst at CNN, called this slip an outright “lie” in a conversation with CNN anchor Erin Burnett on Thursday. “Not only does she not have any credibility left, she lied,” said Ryan. “She outright lied and the people, the American people can’t trust her. They can’t trust what’s said from the president’s mouthpiece, spokesperson, from the people’s house. Therefore, she should be let go. She should be fired. End of story. When there is a lack of credibility there, you have to start and start lopping the heads off. It’s ‘Fire Me Thursday’ or ‘Fire Me Good Friday,’ she needs to go.”