Sarah Sanders says Mick Mulvaney once called John Bolton a ‘self-righteous, self-centered son of a b----’ 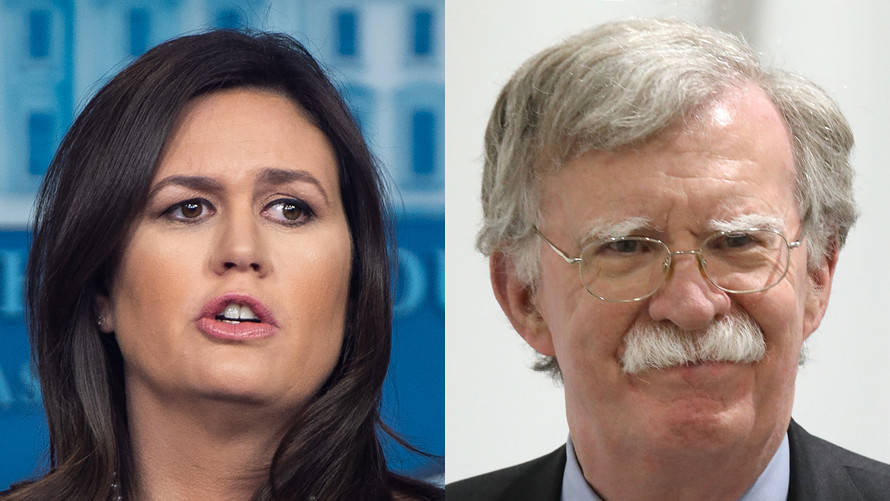 Getty Images
It’s Sarah Sanders vs. John Bolton in a battle of the books.

John Bolton’s book isn’t the only political memoir heating things up this summer.

Bolton’s “The Room Where It Happened” has been making headlines for days thanks to excepts that have by turns: accused Trump of reaching out to Chinese President Xi Jinping for help winning the 2020 election; said the president believed that Finland was a part of Russia; and that Trump supposedly called all journalists “scumbags” that should be “executed.”

Now Sanders is countering in her own memoir that Bolton is “a classic case of a senior White House official drunk on power, who had forgotten that nobody elected him to anything,” according to an excerpt published by Axios on Monda y.

It includes a lengthy account of a 2019 incident, when Bolton took a separate motorcade from the rest of the White House staff during the president’s state visit to London, which reportedly rubbed Trump’s former chief of staff Mick Mulvaney the wrong way.

“Bolton apparently felt too important to travel with the rest of us,” writes Sanders. “We waited and watched as Bolton sped by and left us in the dust. The discussion on the bus quickly moved... to how arrogant and selfish Bolton could be, not just in this moment but on a regular basis.”

And this led to Mulvaney unleashing “a full Irish explosion on him,” she continues, claiming that Mulvaney hurled obscenities at Bolton:

Sanders claims that Mulvaney is normally “laid-back,” but the epithet “was the culmination of months of Bolton thinking he was more important and could play by a different set of rules than the rest of the team.

She also tweeted the full excerpt in a thread on her official Twitter /zigman2/quotes/203180645/composite TWTR +2.94%  account on Monday morning, and recalled that she and the others present (including Treasury Secretary Steven Mnuchin) “nodded in approval, proud of Mick for standing up for us.”

This led to Sanders topping Google /zigman2/quotes/205453964/composite GOOG +0.43% searches and Twitter trending topics on Monday. Yet some critics questioned her credibility. Many recalled the time when she said that her statements to the press after former FBI director James Comey was fired were just a “slip of the tongue” — yet the Mueller report revealed her admitting that those remarks to the news media weren’t “founded on anything.”

Related: Sarah Sanders said she doesn’t like being called a liar, and Twitter users were quick to respond

Others called both Bolton and Sanders “awful” and questioned whether either book will be a reliable source of information.

In response, Sarah Tinsley, a longtime senior adviser to Bolton, told Axios that Bolton had nothing to do with creating the travel arrangements during the 2019 London visit. They were handled by the Secret Service. “It is impossible to believe that his assigned Secret Service agents acted other than in a completely professional manner, fully coordinated with the Secret Service details assigned to Messrs. Mnuchin and Mulvaney,” she said.