Food for thought after Thanksgiving dinner: The reason most diets fail

When trying to lose weight, a new study suggests there’s one thing you should always do 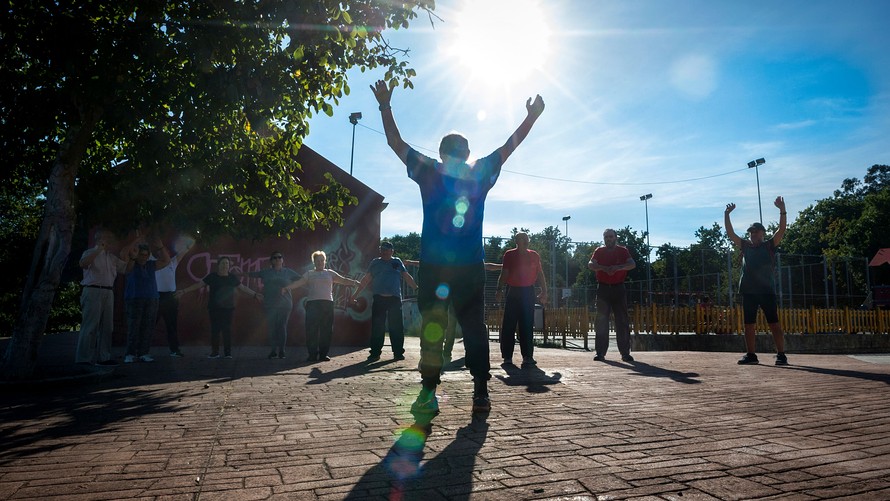 MIGUEL RIOPA/AFP/Getty Images
There’s safety in numbers when it comes to dieting.

Something to think about after you get over the Thanksgiving splurge: Obesity is killing us.

The epidemic of obesity in America is giving us heart disease, diabetes, and even cancer. It’s killing us earlier and making us unhealthy, unproductive and miserable. The Milken Institute last week estimated it’s costing our country $1.7 trillion a year in healthcare expenditures and lost output.

And it’s getting worse. Around three quarters of American men, and two-thirds of women, are now overweight according to a new report. The percentage of us who are obese has risen by a third this millennium, and is now around 40%, experts say.

A few years back there was even a fad for “The Cabbage Soup Diet.” Yecch.

They all succeed a bit, for a while. And then they don’t. Or the public gets bored and move on to another one.

Are we dieting the wrong way?

That’s the startling implication of a new report by the U.S. Preventive Services Taskforce, an independent team of medical experts supported by the U.S. Federal government.

After studying nearly 100 weight-loss programs and weight maintenance programs, the task force concluded that successful dieting isn’t just about what diet plan you follow, and what you eat, or even what type of exercise you do.

The task force concluded that successful dieting isn’t just about what diet plan you follow, and what you eat, or even what type of exercise you do.

It’s about whether you have a system in place that provides regular support, including frequent face-to-face meetings, to help you stick to it.

In a nutshell: Don’t diet alone.

People who try to lose weight and get healthy in a structured program, with expert interventions and support, typically lose a lot of weight, studies find.

People who try to do it alone often don’t.

Sounds obvious when you think about it, but if it really were obvious we wouldn’t all waste so much money on fad diet books.

That may sound like good news for companies like WW International Inc., formerly Weight Watchers   and Jenny Craig. But no one program works best for everyone, researchers say. Some people do best meeting a doctor or nutritionist one-on-one. Others do better in groups. And so on.

What do successful dieters do?

But successful programs all seem to have a few key things in common.

They meet regularly. The median program studied met once every two weeks and the more often the better. “We know the more intensive interventions produce more significant weight loss, and also produce better health outcomes over the long term,” says Dr. Chyke Doubeni , a task force member and a professor at the University of Pennsylvania’s Perelman School of Medicine.

The meetings are meaningful. For instance, researchers found that the typical group meeting in successful programs consisted of classroom-style sessions lasting one or two hours each time.

You aren’t going to lose weight without bathroom scales, tracking portions and monitoring your exercise, experts and experience both suggest.

The meetings focus on changing behavior. They reinforced healthy messages, helped people who were succeeding to stay on track, and helped those who were failing to get back on track.

The meetings talk about both diet and exercise. It’s not just the weight loss, but also ensuring that people are physically fit and eating a healthy diet,” Doubeni says. [That’s] central to reducing health risk in people with obesity.”

The programs give people tools to monitor their behavior between meetings. These include pedometers, body scales, food scales, exercise videos, and so on.

You aren’t going to lose weight without bathroom scales, tracking portions and monitoring your exercise, experts and experience both suggest.

(It’s an old rule of management: What gets measured gets managed. The flip-side is that what doesn’t get measured doesn’t get managed.)

Tools may also be important because, psychologically, they give the dieter a stronger feeling of control.

And successful programs last long enough to change behavior, researchers found. The successful programs studied often lasted for a full year, and frequently for more than that. And they include weight maintenance programs to keep off the weight once you’ve lost it.

“Most of the intensive behavioral weight loss interventions... lasted for 1 or 2 years, and the majority had 12 or more sessions in the first year,” the researchers write.

Picking the latest fad diet and trying it for six weeks is what most of us do. No wonder we keep failing. But that is no reason to despair. The problem isn’t us. According to this latest research, we may be just using the wrong technique.