Bulletin Rooting for Tom Brady over Aaron Rodgers this weekend? You're not alone. »
Investor Alert

Dispute is over pay and unpaid work 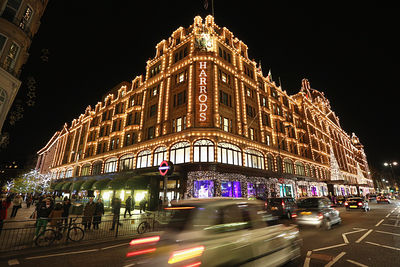 Security guards in London’s iconic Harrods store could go on strike in February in a dispute over pay and unpaid work.

The store’s security officers and video surveillance operators, members of the U.K.’s biggest union, Unite, have begun voting on strike action this week.

The union said its members resent having to work for half an hour every day unpaid, as they attend a separate location 15 minutes before the start of the day and 15 minutes after the end to pick up and drop off items including work schedules, radios and keys.

The workers are also not happy about having to take on an additional unpaid “training day” every eight weeks.

The ballot closes on Jan. 29, and if members vote for industrial action, strikes could start as early as next month.

Management at Harrods has offered them a pay raise, which the union says is below the inflation rate. The union didn’t quantify the pay raise.

According to a statement from Harrods, the company says it pays the security officers in line with the industry and the only time pay increases were below inflation is when an individual’s salary was above benchmarks. The company did not return phone and email messages.

The famous luxury store, then just a grocery, opened in 1849 in Knightsbridge, at the time a small village outside of London. Now Harrods is one of the world’s most famous stores, offering a range of luxury goods for every taste, from caviar to monogrammed dinner plates to teddy bears.