This man feeds senators — but needs food stamps for his family 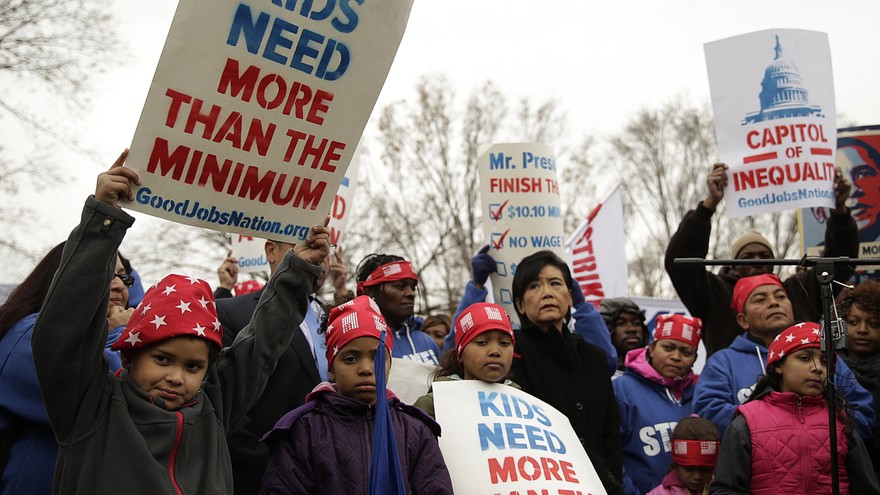 Reuters
Familes of workers for the federal government demand a $15 per hour minimum wage during a protest in Washington.

WASHINGTON (MarketWatch) — Food workers who cater to U.S. senators say they are fed up with low pay and being ignored by the powerful people they serve — and they want the president and 2016 White House hopefuls to do something about it.

Several dozen Senate cafeteria walked off the job Wednesday morning to protest for higher pay — they want $15 an hour. And one of the workers penned an editorial for the left-leaning British newspaper The Guardian to describe a life in “poverty” and how his American dream has turned into a “nightmare.”

“I am walking off my job because I want the presidential hopefuls to know that I live in poverty,” wrote Bertrand Olotara. “Many senators canvas the country giving speeches about creating ‘opportunity’ for workers and helping our kids achieve the ‘American dream’ – most don’t seem to notice or care that workers in their own building are struggling to survive.”

Read: I am a cook in the US Senate but I still need food stamps to feed my children

Olotara and his co-workers want President Obama to sign an order that gives preference to companies that pay at least $15 an hour when the government contracts for services such as food preparation. The company that runs the food service in the Senate is Compass Group PLC /zigman2/quotes/201136426/delayed CMPGY +4.41% /zigman2/quotes/200043088/delayed UK:CPG +3.87% , a U.K.-based firm.

Last year Obama signed an order requiring firms that contract with the U.S. government to pay at least $10.10 an hour, well above the federal minimum wage of $7.25.

Raising it to $15 would also easily dwarf the highest minimum wage of any state. Even liberal governments in California and the District of Columbia have balked at such a large increase because of concerns that higher labor costs would force some companies to cut jobs or relocate.

Companies operating in Washington, D.C., for example, are required to pay a minimum wage of $9.50 an hour, a rate that will gradually increase to $11.50 by mid-2016. California will boost its minimum wage to $10 an hour next year from $9 now.

See what your state’s minimum wage is here.

In Olotara’s case, he says he gets paid $12.30 an hour. That’s higher than any state minimum wage, but the divorced father of five children says it’s still not enough to raise his family.

“I hate to admit it, but I have to use food stamps so that my kids don’t go to bed hungry,’ he wrote. See video interview with Bertrand Olotara

The description of Olotara’s plight, however, leaves some questions unanswered. He said he works 60 to 70 hours a week at two jobs, which could push his annual earnings to $35,000 to $40,000 a year even if his second job only pays the D.C. minimum wage.

What’s more, at that pay level he should also be eligible for up to $6,000 a year in federal refunds under the earned income tax credit.

Nor does Olotara’s article disclose how much he receives in food stamps or whether his ex-wife contributes to the family.

Whatever the case, the debate over how much companies should pay their workers at a minimum is likely to continue to grow as the 2016 presidential election approaches.

Get news alerts on Compass Group PLC ADR — or create your own.