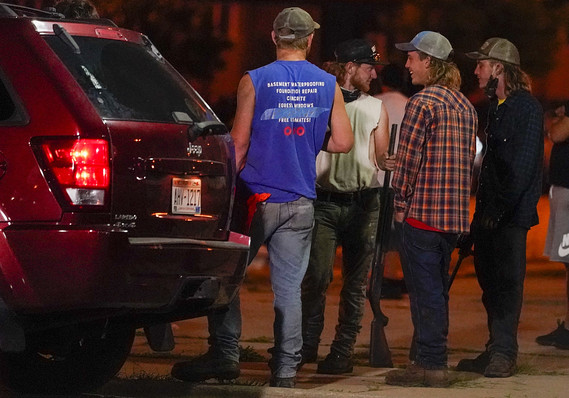 KENOSHA, Wis. — A white, 17-year-old police admirer was arrested Wednesday after two people were shot to death during a third straight night of protests in Kenosha over the police shooting of a Black man, Jacob Blake.

Kyle Rittenhouse, of Antioch, Illinois, about 15 miles from Kenosha, was taken into custody in Illinois on suspicion of first-degree intentional homicide in the rifle attack Tuesday night that was largely captured on cellphone video. A third person was wounded.

“I just killed somebody,” he could be heard saying at one point during the shooting rampage that erupted just before midnight.

Blake’s shooting set off three nights of unrest in the city midway between Milwaukee and Chicago.

In the wake of the killings, Wisconsin Gov. Tony Evers authorized the sending of 500 members of the National Guard to Kenosha, doubling the number of troops. The governor’s office said he is working with other states to bring in additional National Guard members and law officers. Authorities also announced a 7 p.m. curfew, an hour earlier than the night before.

“A senseless tragedy like this cannot happen again,” the governor, a Democrat, said in a statement. “I again ask those who choose to exercise their First Amendment rights please do so peacefully and safely, as so many did last night. I also ask the individuals who are not there to exercise those rights to please stay home and let local first responders, law enforcement and members of the Wisconsin National Guard do their jobs.”

In Washington, the Justice Department said it is sending in more than 200 federal agents from the FBI, U.S. Marshals Service and the Bureau of Alcohol, Tobacco, Firearms and Explosives in response to the unrest. The White House said up to 2,000 National Guard troops would be made available.

And in Orlando, the NBA’s Milwaukee Bucks, a team based in Wisconsin, didn’t take the floor for their playoff game against the Magic. It was later announced that all three NBA playoff games scheduled for Wednesday were postponed, with players around the league choosing to boycott in their strongest statement yet against racial injustice.

“We were all chanting ‘Black lives matter’ at the gas station and then we heard, boom, boom, and I told my friend, ‘That’s not fireworks,’” 19-year-old protester Devin Scott told the Chicago Tribune. “And then this guy with this huge gun runs by us in the middle of the street and people are yelling, ‘He shot someone! He shot someone!’ And everyone is trying to fight the guy, chasing him and then he started shooting again.”

Scott said he cradled a lifeless victim in his arms, and a woman started performing CPR, but “I don’t think he made it.”

According to witness accounts and video footage, police apparently let the gunman walk past them and leave the scene with a rifle over his shoulder and his hands in the air as members of the crowd were yelling for him to be arrested because he had shot people.

As for how the gunman managed to leave the scene, Sheriff David Beth portrayed a chaotic, high-stress situation, with screaming, chanting, nonstop radio traffic and people running all over — conditions he said can cause “tunnel vision” among law officers.

Rittenhouse was assigned a public defender in Illinois for a hearing Friday on his transfer to Wisconsin. The public defender’s office had no comment. Under Wisconsin law, anyone 17 or older is treated as an adult in the criminal justice system.

Much of Rittenhouse’s Facebook page is devoted to praising law enforcement, with references to Blue Lives Matter, a movement that supports police. He also can be seen holding an assault rifle.