Snap is struggling in one area where it needs to succeed

While user numbers were better than expected, growth in average revenue per user decelerated sharply 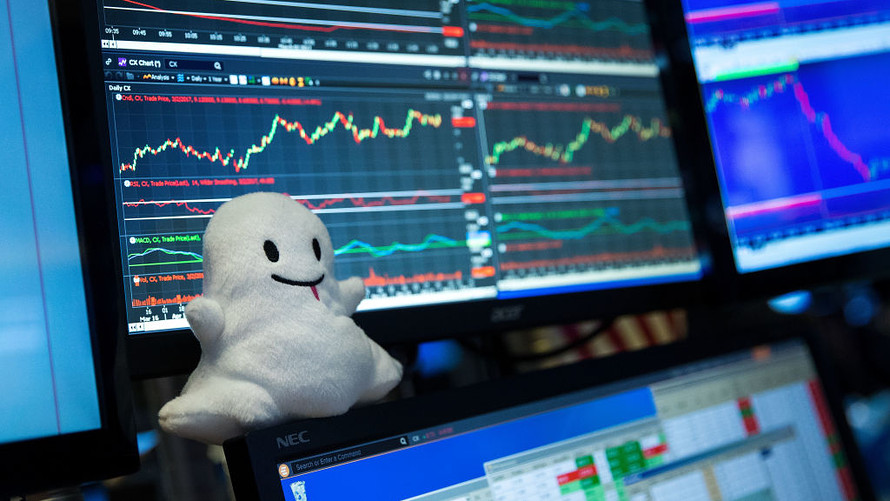 Getty
Snap stock soared more than 10% after earnings were released Tuesday afternoon, but gains disappeared after investors processed some disappointing deceleration in a key metric.

Snap Inc.’s user numbers were not as bad as expected in Tuesday’s earnings report, but the Snapchat parent company is suddenly struggling in the one area in which it must succeed.

Snap /zigman2/quotes/205087158/composite SNAP -1.47% reported narrower-than-expected losses in the first quarter, and 4 million new users from the end of the year, 2 million more than Wall Street had been expecting. But Snap also reported that a closely watched number — average revenue per user, or ARPU — declined sequentially across all geographic regions, to $1.68 per user, down from $2.01 in the fourth quarter. Snap already has the lowest ARPU among publicly held social-media companies, as CNBC pointed out last month . In the fourth quarter, Snap’s $2.01 in ARPU compared with $7.37 for Facebook Inc. /zigman2/quotes/205064656/composite FB -1.15%  and $9.48 for Twitter Inc. /zigman2/quotes/203180645/composite TWTR +4.26% .

As Twitter has proved over the past couple of years, a social-media service can survive without consistently adding a ton of users, as long as it grows the amount of money it makes on each user. Before Tuesday, bulls could at least point to a huge rate of growth in Snap’s ARPU, especially in Europe and the rest of the world, where Snap desperately needs a boost.

But that changed in the first quarter, as ARPU growth hit record lows outside North America. In Europe, Snap reported collecting 77 cents per user, up 47% from last year, and it was 97 cents in the rest of the world, up 68%. It is the first time that ARPU growth in the rest of the world has fallen below triple-digit percentage gains, and the growth rate in Europe fell from 57% last quarter and 120% a year ago.

Snap’s shares, which initially surged by more than 10% on the earnings news, fell back before the earnings conference call started. The stock ended the after-hours session up 2.5%.

Snap has put its hopes for growth outside the U.S. on a redesigned app for Alphabet Inc.’s /zigman2/quotes/202490156/composite GOOGL +0.58%   /zigman2/quotes/205453964/composite GOOG +0.47%  Android operating system, completing the final rollout last month. The updated app will be key in continuing to drive broader growth among young overseas users who often have lower-cost smartphones with slower connections.

“There are billions of Android devices in the world that now have access to an improved Snapchat experience and we look forward to being able to grow our Snapchat community in new markets,” co-founder and Chief Executive Evan Spiegel said on Tuesday’s call, adding later that the company was excited with what it was seeing from the Android rollout.

“Europe ... really lagged North America and the shift to self-serve, so the impacts are more pronounced in our year-over-year revenue and ARPU trends, whereas rest-of-world started on the auction,” interim Chief Financial Officer Lara Sweet said on the conference call.

Ever since its IPO, Snap has been clouded by the view on Wall Street that the biggest growth in its user base was over, and that it went public after growth had peaked. The company must now monetize its users better, especially overseas, to get the kind of growth Wall Street is looking for, and its improved Android app and overcoming lags for the transition to self-serve ads are key to that potential.

If Snap wants to be seen as a promising investment again, it needs to reinvigorate growth in either users or average revenue per user, and preferably both.