There are an estimated 100,000 ventilators in the U.S. but some predict that the country could need up to 750,000 for this pandemic, Needham analysts have said 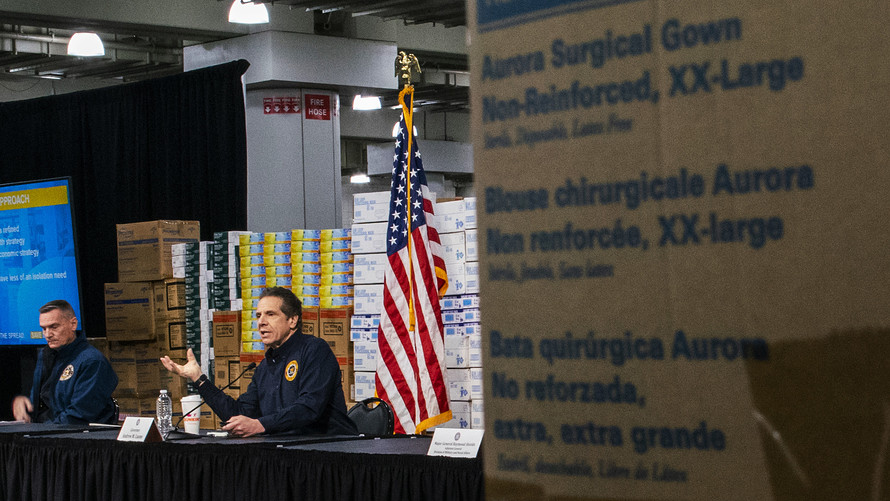 Ventilators have become one of the most politicized and in-demand medical supplies as the number of COVID-19 cases in the U.S. grows and hospitals prepare for a surge in patients.

President Donald Trump and New York Gov. Andrew Cuomo have engaged in a heated exchange about the state’s access to ventilators from the federal stockpile. At the same time, ventilator manufacturers have upped production, in some instances promising to produce more than twice as many ventilators as they normally do, and new entrants like Ford Motor Co. (NYS:F)  and General Motors Co. (NYS:GM)  have formally entered into manufacturing partnerships for ventilators.

There are an estimated 100,000 ventilators in the U.S. but some predict that the country could need up to 750,000 for this pandemic, Needham analysts have said.

Experts at ECRI, a not-for-profit that evaluates medical safety and costs, say they are not aware of ventilator shortages in U.S. hospitals at this time. “Obviously, that could change in the coming weeks,” they wrote in a March 24 email.

There are now nearly half a million cases of the novel coronavirus worldwide, including the 55,568 people in the U.S. who have tested positive for COVID-19, according to aggregated data from Johns Hopkins University. More than 800 people have died in the U.S. while New York state has emerged as the epicenter of the U.S. outbreak, with more than 25,000 cases, including 14,904 in New York City alone.

In the most severe cases of COVID-19, many patients contract pneumonia, and those who are hospitalized for COVID-19 often require mechanical ventilation or are put on ventilators when they are placed in ICUs. In a medical summary published March 19 in JAMA, 71% of the patients admitted to an ICU at Evergreen Hospital in Washington state with COVID-19 were put on mechanical ventilation.

A handful of manufacturers produce ventilators for the U.S., including publicly traded companies like General Electric Co.’s (NYS:GE)  health care business, Getinge AB (OME:SE:GETI.B) — which has told investors it has the most ventilator installations in ICUs worldwide⁠— Hillrom Holdings Inc. (NYS:HRC) , Medtronic (NYS:MDT) , and ResMed Inc. (NYS:RMD) , as well as privately held companies such as Dräger, Hamilton Medical Inc., and Vyaire Medical Inc. Most have confirmed increased production of ventilators in response to the worldwide pandemic.

Masimo Corp. (NAS:MASI)  this month spent an undisclosed sum to acquire TNI Medical, a German ventilation company that has reported increased demand due to COVID-19.

Last week, when U.S. case counts started to grow significantly, companies begin sharing plans to increase or start production of ventilators, as well as of personal protective equipment like masks and gowns. Then, on Monday, the Food and Drug Administration issued new rules allowing medical device makers to skip the regulatory review process normally required to make changes to existing products or manufacturing lines to speed up production of ventilators. It also allows hospitals to consider using ventilators used for other settings, like ambulances, or indications, like the continuous positive airway pressure (CPAP) devices used at home to treat sleep apnea. There have also been reports that hospitals have requested ventilators used in veterinary practices.

“If you want to help expand production of ventilators to save American lives in this pandemic, we are going to work with you to sweep every possible barrier out of your way,” Health and Human Services Secretary Alex Azar said in a statement.

This week GM announced it is manufacturing ventilator parts for Ventec Life Systems, a privately held ventilator maker, while Ford plans to manufacture a simplified version of GE Healthcare’s ventilator. (This is the first time that Ford has produced ventilators; however, in the 1940s its engineers developed an iron lung for children with polio and incubators aimed at reducing infant deaths in rural communities, a Ford spokesperson said by email.)

In the U.K., at the request of Prime Minister Boris Johnson, the electronics company Dyson Ltd. partnered with The Technology Partnership to design and manufacture 10,000 ventilators specifically designed for COVID-19 patients. The device still needs regulatory approval, however.

Demand for ventilators is likely driven by two factors: the formation of new makeshift hospitals to treat patient severe infections, and hospitals gearing up for a flood of COVID-19 patients.

Premier Inc. (NAS:PINC) , which operates a group purchasing organization that buys medical supplies on behalf of hospitals, estimates that U.S. hospitals buy 3,000 ventilators a year. One manufacturer told Premier it has received purchase orders for 600 ventilators over a three-day span last week. “That’s 25% of the typical annual supply for our providers,” Chaun Powell, Premier’s disaster preparedness lead, said in a statement.

Some state officials have called for makeshift hospitals in hotels, universities, and convention centers, such as the hospital facilities being built by the Army Corps of Engineers and the National Guard at the Javits Center in Manhattan, or the field hospital being built on a soccer field in Shoreline, Wash.

Cuomo and Trump’s sparring over ventilator access took a turn when the Federal Emergency Management Agency reportedly promised the state 400 ventilators. “Really? What am I going to do with 400 ventilators when I need 30,000?” Cuomo said during a news conference on Tuesday. “You pick the 26,000 people who are going to die because you only sent 400 ventilators.”

President Trump said Tuesday evening that 4,000 ventilators are now being shipped to New York and tweeted on Wednesday night “many additional ventilators” have been delivered. The state has 11,000, as of Thursday morning. However, there are also questions about how ventilators will be paid for. Cuomo priced a basic model at $25,000, while ECRI data shows the average list price for ICU ventilators range from $45,000 to $82,000 per unit.

Longer-term, medical experts hope that some of the investigational treatments in clinical trials may lessen the need for mechanical ventilation among patients hospitalized with severe COVID-19 infections. A number of the experimental medicines being tested as treatments for COVID-19 patients cite reducing or stopping the need for ventilation as primary and secondary endpoints in the clinical studies. This includes Gilead Sciences Inc.’s (NAS:GILD)  remdesivir, Regeneron Pharmaceuticals (NAS:REGN)  and Sanofi’s (NAS:SNY)  Kevzara, Roche Holding AG’s (SWX:CH:ROG)  Actemra, and Bellerophon Therapeutics Inc.’s (NAS:BLPH)  Inopulse.

“The respiratory symptoms of COVID-19 are the most deadly, but even more concerning is the overburdening of hospital systems as we’ve seen in Italy, where there aren’t enough respirators or ICU beds to treat everyone,” Maxim Group’s Jason McCarthy wrote in a note on Friday. “Inopulse may be able to reduce the need for ventilation and reduce the progression of the disease to severe, which would substantially reduce the impact on health care resources.”

Still, fears about potential shortages of ventilators and overflowing hospitals have prompted some to consider do-it-yourself ventilators. A video posted on YouTube outlines how to convert a CPAP machine into a “rudimentary ventilator-ish device that could help with breathing,” Johnny Lee, a Google engineer, wrote in the introduction to his channel. The video has been viewed 30,000 times in four days.