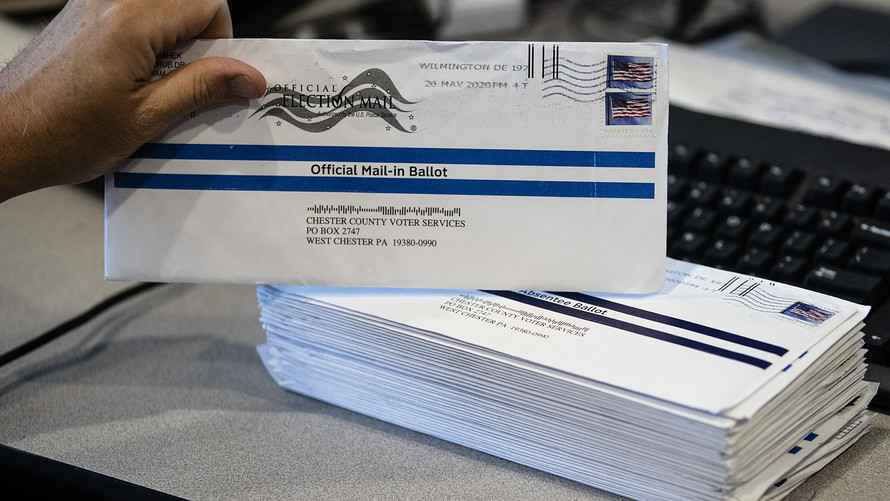 That claim is part of a pattern. He also has incorrectly equated a secretary of state widely distributing absentee ballot requests with the ballots themselves in Michigan.

Key Words: Biden says his ‘greatest concern’ is that Trump’s ‘going to try to steal this election’

Last week, after Iowa voters broke a 26-year-old statewide primary election turnout record, the Iowa Senate’s GOP majority pressed to bar Secretary of State Paul Pate from sending absentee ballots to all 2 million registered voters this fall, as he did before the June 3 primary.

“My goal was to protect Iowa voters and poll workers while finding ways to conduct a clean and fair election,” Pate said last month. “I stand by my decisions.”

His Georgia counterpart, Brad Raffensperger, faced a similar fate after he, too, sent absentee ballot applications to nearly 7 million registered voters ahead of the state’s June primary. Although Raffensperger objected to proposed limits being put on his authority, legislation to do that died when the legislature adjourned and after he said he would not repeat the move this fall.

Trump carried Georgia, Iowa and Ohio comfortably in 2016. To win again, he would likely need to match his sizable winning margins in their rural counties, home to many in his older, white base.

Presumptive Democratic presidential nominee Joe Biden has backed mail-in voting, saying it would make it easier for people to vote this November amid the coronavirus pandemic.

Some longtime GOP activists say expanded vote by mail is essential for older voters who are accustomed to voting in person but hesitant to during the pandemic and who are unfamiliar with the process.

Ann Trimble Ray, a veteran Iowa GOP activist, voted in June by mail and says Pate made the right call, especially for the many older voters in her rural home in Sac County, which Trump carried with 72% of the 2016 vote.

“Reducing their exposure by voting absentee, we think, was a considerate thing to do,” she said. “I was grateful for Secretary of State Pate’s mailing and encouragement for absentee voting.”

Consolidation of rural polling places, shrunken election staff and long lines may deter rural voters vital to Trump, said University of California Irvine professor Richard Hasen, chair of a committee of U.S. scholars that has recommended changes ahead of the 2020 elections.

“The voters Trump is hurting are likely his own when he’s making these comments against mail-in balloting,” said Hasen, “because it’s a safe and generally effective way to cast a ballot, especially in the midst of a pandemic.”

The check on ballot request steps in Iowa and Georgia also could threaten rural votes from being counted, based on McDonald’s study.

Though Ohio counts all mail-in ballots postmarked by Election Day, a number of absentee ballots came in late for the March 17 primary, including 4,000 in Greene County in southeast Ohio, a county where Trump won 60% of the vote.