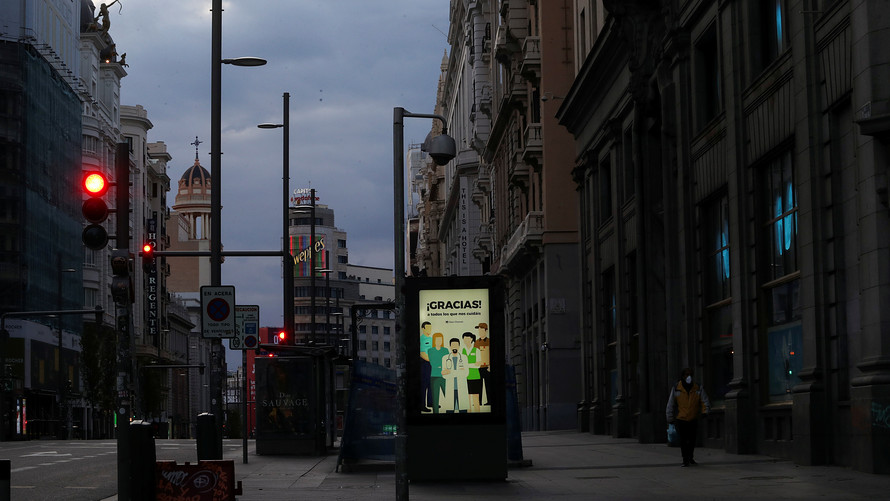 Reuters
A man wearing a protective face mask walks past a sign that reads "Thank you to those who take care of us" along a deserted Gran Vía Street during the coronavirus disease (COVID-19) outbreak in Madrid, Spain on March 22, 2020.

The Spanish government is this week expected to expand its emergency measures that began roughly a week ago, as it struggles against one of the worst outbreaks in Europe and outside of China.

In a press conference on Sunday, Spanish Prime Minister Pedro Sánchez said the government will seek to extend one of the strictest lockdowns outside of China to April 11, with a Wednesday vote in Congress largely expected to clear the way for that measure.

The fresh measures will keep Spaniards confined to their houses, only leaving to grocery shop or go to the pharmacy or the doctor, or briefly walk their dogs. Non-vital travel will be banned for 30 days and the country will redouble efforts to produce nationally the materials needed by health-care workers to fight the virus.

Sánchez also called for Brussels to launch a so-called “Marshall Plan” to pour investment into the whole of the EU, and pressed for debt issues to help spread risk among the countries.

That is as Sánchez warned on Saturday that the “worst was yet to come,” with very difficult days ahead that would see the infection and death rates rising, which will test the limits of the country’s health-care system. Between Saturday and Sunday, Spain recorded 394 deaths from the virus, bringing the death toll to 1,720, according to official health department numbers . On Monday, the country reported the death toll had risen to 2,182, representing another 462 deaths.

The Spanish military, which has so far been helping police with cleaning and security, has now started moving infected individuals to a 5,500-bed facility at the IFEMA conference center in Madrid. The government has been urgently seeking a range of personnel, including doctors, nurses and security guards, to get it up and running.

The government on Monday also began distributing 640,000 rapid coronavirus testing kits purchased from China. The first 8,000 will be sent to the worst-hit Madrid region to health workers and senior residences. Madrid Community President Isabel Díaz Ayuso, also in quarantine for the virus and who announced the death of her cousin to the illness over the weekend, has complained across social media about the lack of testing kits and other supplies. Doctors have also taken to social media to plead for supplies.

Down 34% year to date, Spain’s IBEX 35 index /zigman2/quotes/210597995/delayed XX:IBEX -0.20%  fell another 3% on Monday, tracking losses across global equities amid the rising death toll in Europe and the U.S., and after U.S. politicians failed to agree on a rescue package over the weekend.