Standoff in Spain intensifies, as government gears up to strip autonomy from Catalonia 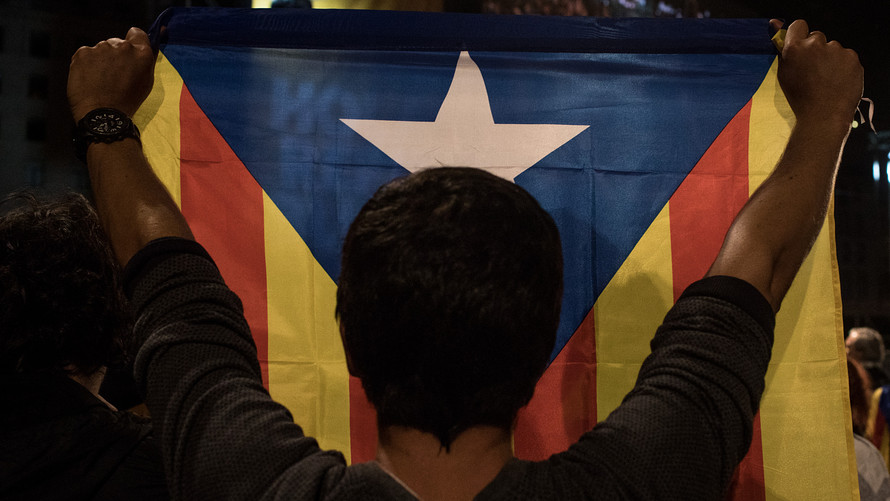 Getty Images
The Catalan flag is a symbol for those who want independence.

Tensions between Spain and its wealthy northeastern region deepened Thursday as the central government took steps to impose direct rule on Catalonia, after the Catalan leader failed to meet a deadline to renounce a push for independence.

The Spanish government demanded that the Catalan region, led by President Carles Puigdemont, drop its bid for independence by 10 a.m. local time Thursday. But the deadline passed without that demand being met; Puigdemont instead threatened Madrid that it would push forward with making a formal declaration of independence if the government refused to negotiate.

In response, the central government said it would hold an extraordinary meeting on Saturday to invoke Article 155 of the country’s constitution, which will set the wheels in motion to strip the region of some of its powers. It would be the first time a Spanish government has tried to suspend home rule for one of its regions.

These are the latest moves in a standoff between Catalonia and Spain after leaders in the region held a referendum on Oct. 1, which showed overwhelming support for separation from Spain, though on low voter turnout. Spanish courts have said the vote and the push for secession are illegal under the country’s constitution.

There’s now a wait to gauge further response on both sides, as well as protests and demonstrations in Catalonia.

Pro-independence unrest in Catalonia has been answered by large-scale pro-unity demonstrations since the crisis began, though the Spanish government has been criticized for its heavy-handed response to the situation. On Tuesday, Catalans protested in Barcelona after the authorities detained two separatist leaders .

The central government would likely start its removal of home rule by taking control of the police forces in Catalonia, reported The Wall Street Journal , citing sources.

What’s been the reaction?

The European Union has said that the crisis is a matter for Spain. Luxembourg’s prime minister, Xavier Bettel, said Thursday ahead of that summit that the EU “cannot ignore the reality” of what is happening there, according to the F T. Spanish Prime Minister Mariano Rajoy is attending that meeting and Bettel said he expected he would speak about the crisis to other leaders.

Spanish stocks /zigman2/quotes/210599654/delayed XX:SXXP -0.03%  continued to fall throughout the day, last down 0.8%. The rest of European markets were also under pressure, while the euro /zigman2/quotes/210561242/realtime/sampled EURUSD +0.2639% surprised some by holding its ground, after initially falling.

As well, U.S. stock futures pulled back, with some saying Spain tensions had offered up an excuse for selling stocks which have persistently been at record highs.

“With uncertainty potentially mounting after Spain’s government triggers Article 155 this weekend, the Euro remains exposed to downside risks. Investors should keep in mind that although the Catalan drama is limited to Spain, it could still spark fears over the rise of other separatist movements in Europe. Such a situation is likely to threaten the stability of the European Union,” said Lukman Otunuga, Research Analyst at FXTM, in a note to clients.