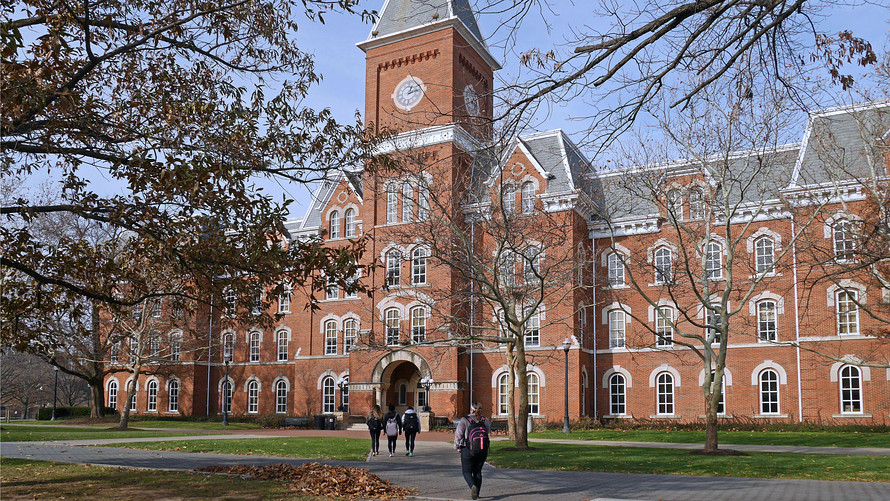 The notion of a state college as government-funded public good is slowly disappearing.

In 1987, public colleges received three times more revenue funding per-student from state and local governments than from tuition, according to an analysis published Thursday by Peter Hinrichs, a senior research economist at the Federal Reserve Bank of Cleveland. But by 2013, the amount of money public schools received from tuition was roughly the same as what the schools brought in from state and local governments .

During that period, funding from state and local governments declined, while funding from tuition increased. In 1987, public schools received $3,600 in tuition money per student on average. By 2013, that had increased to $9,300, adjusting for inflation. Hinrichs said his data doesn’t directly show that declines in state funding translated into tuition increases, “but I would probably suspect that it’s not just a coincidence,” he said.

A prominent example of this dynamic played out earlier this week, when the trustees at California State University, the biggest public university system in the country, voted to raise tuition 5% amid cuts to state funds. The decline in state support and rising tuition comes as student debt continues to grow and borrowers struggle to manage it. More than 1 million federal student loan borrowers defaulted on their debt last year. 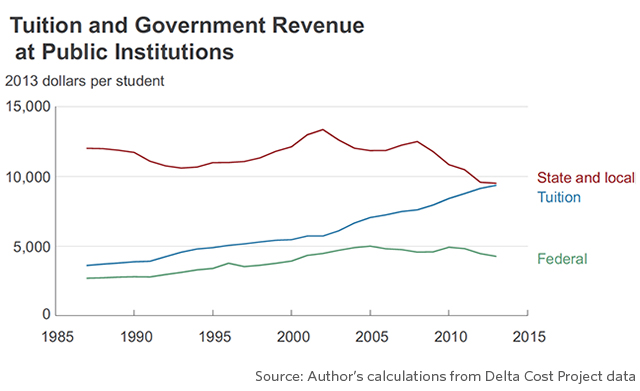 Indeed, other research indicates that decreasing public support for public colleges is one of the major factors that contributed to the rise in college costs over the past several years.http://www.marketwatch.com/story/public-colleges-are-luring-international-students-to-cope-with-state-budget-cuts-2016-12-28 State and local governments have been slashing funding to higher education for decades, but during the recession, that support plummeted. It’s recovered somewhat since but, even so, in 2016 state funding for public colleges was nearly $10 billion lower than what it was before the recession, according to the Center on Budget and Policy Priorities , a nonpartisan research and policy institute.

It’s hard to say whether these current trends will continue, but there’s little indication that states plan to increase public support for their universities substantially. A proposal by the Democratic candidates for president that aimed to encourage states to invest in their higher education institutions by using federal funding as leverage appears to no longer be on the table. Some states are pursuing free tuition proposals and, while those may help some students, they don’t actually increase the level of funds pouring into universities; instead, they replace money that would have been paid by families with funding from other sources.

If nothing changes and college prices continue to rise at the same rate, a year of public college will cost more than $54,000 in 18 years, according to a recent analysis by Vanguard , an investment management firm. But if trends in state funding reverse, it’s possible students could wind up getting a better deal. As long as colleges chose to keep their spending levels the same — not necessarily a guarantee — they could theoretically cut tuition, Hinrichs said.

“If they so decided,” he said