David Holmes said to have told lawmakers late Friday that he overhead the July call while he was having lunch in Kyiv with Donald Trump’s ambassador to the EU, Gordon Sondland 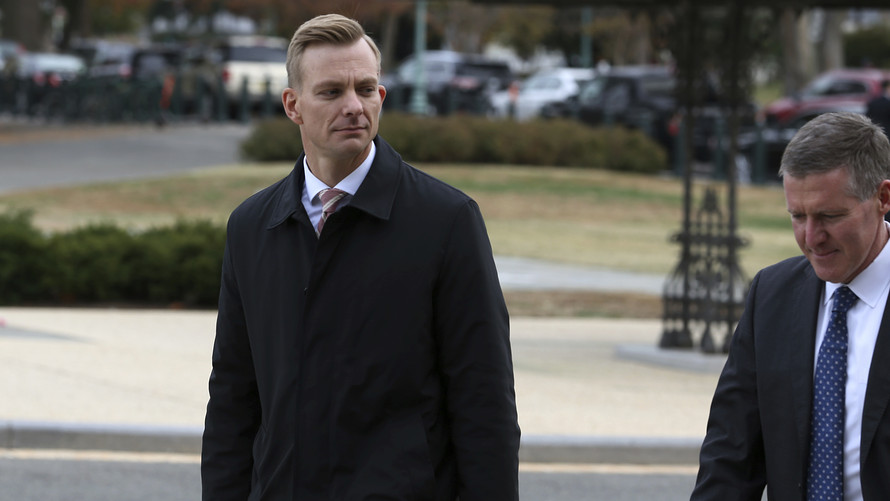 Associated Press
David Holmes, a career diplomat and the political counselor at the embassy in Kyiv, arrives on Capitol Hill on Friday to testify before lawmakers as part of the Trump impeachment inquiry.

WASHINGTON (AP) — A State Department official based in Ukraine told impeachment investigators Friday that he overheard a conversation between President Donald Trump and a diplomat about “investigations” in Ukraine, according to one lawmaker leaving the closed-door deposition.

Rep. Ted Lieu, D-Calif., said David Holmes told lawmakers he overhead the call while he was having lunch in Kyiv in July with Trump’s European Union Ambassador, Gordon Sondland. Lieu said two other people heard the call as well, and said there were four people at the lunch. The Associated Press has already identified one of the other people who heard the call as Suriya Jayanti, a foreign service officer based in Kyiv.

Lieu said Holmes detailed specific quotes from the president in the deposition.

William Taylor, the acting head of the U.S. Embassy in Ukraine, testified Wednesday that a staff member — later identified as Holmes — overheard the conversation at a restaurant in Kyiv, when Sondland was speaking to Trump on his phone.

Taylor said the staff member explained that Sondland had called the president and they could hear Trump on the phone asking about “the investigations.” The ambassador told the president the Ukrainians were ready to move forward, Taylor testified.

The conversation with Sondland came the day after Trump’s July 25 phone call with Ukrainian President Volodymyr Zelensky, in which the U.S. president pressed his counterpart to find information that could help his reelection campaign.

Holmes, now the political counselor at the embassy in Kyiv, joined the Foreign Service in 2002 and has served in Afghanistan, Colombia, India, Kosovo and Russia as well as on the National Security Council staff.

He won an award for constructive dissent from the American Foreign Service Association in 2014 for complaining about problems that an alternate diplomatic channel had caused in South Asia and recommending organizational changes to the State Department’s bureaucratic structure for the region.

Holmes believed that rivalry between the Office of Special Representative for Afghanistan and Pakistan and the Bureau of South and Central Asian Affairs was hurting efforts to promote American interests in the region. The special representative post, known as SRAP, was created in 2009 under former Secretary of State Hillary Clinton, and held until his sudden death in late 2010 by the late, legendary diplomat Richard Holbrooke.

While he held the job, Holbrooke gradually expanded its authorities and responsibilities in ways that continued after he passed away. The expansion of the SRAP office outside the usual chain of command caused consternation within the South and Central Asia bureau, which had traditionally held the entire portfolio. Holmes said competing interests between the two, notably the “non-business as usual approach” of Holbrooke’s former office, had “hindered our diplomatic effectiveness” in South Asia.

Holmes made his concerns known through the State Department’s so-called “Dissent Channel,” which provides diplomats with a confidential way of registering serious concerns. It’s similar to but distinct from the method — a personal cable to the secretary of state — that Taylor used to register his objections about Ukraine policy.