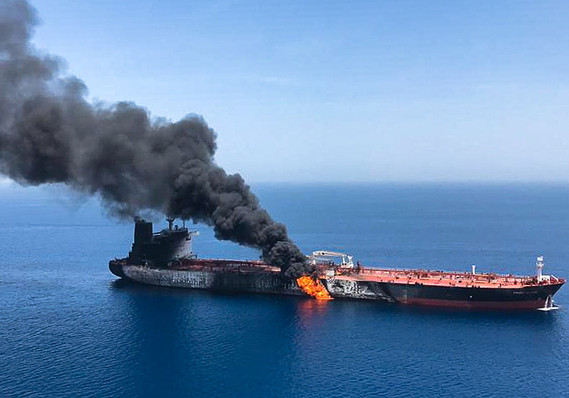 AFP/Getty Images
Fire and smoke billow from the Norwegian-owned Front Altair tanker, which was reportedly attacked in the Gulf of Oman.

Oil futures surged after reports about attacks on two oil tankers in the Gulf of Oman, near the Strait of Hormuz, with the U.S. Navy rushing to assist the vessels. Brent crude  and U.S. benchmark West Texas Intermediate crude both jumped sharply.

Read: Strait of Hormuz in spotlight after oil tankers attacked near world’s most sensitive crude chokepoint

Analysts continue to point to developments around U.S.-China tensions as a risk for global equities. Investors might have found some relief in remarks by President Donald Trump late Wednesday. Trump told reporters that he doesn’t have a deadline for imposing additional tariffs on Chinese goods.

“My deadline is what’s up here,” Trump said, pointing to his head, adding he had a “feeling” a deal could be reached.

The number of Americans applying for jobless benefits in the week ended June 8 rose to 222,000 from 219,000 a week earlier. Economists surveyed by MarketWatch had forecast 218,000.

The oil-tanker attacks “are affecting oil prices,” and energy-related stocks, “but the market doesn’t think the Strait of Hormuz will be closed,” or that the incident will have economywide effects, he added.