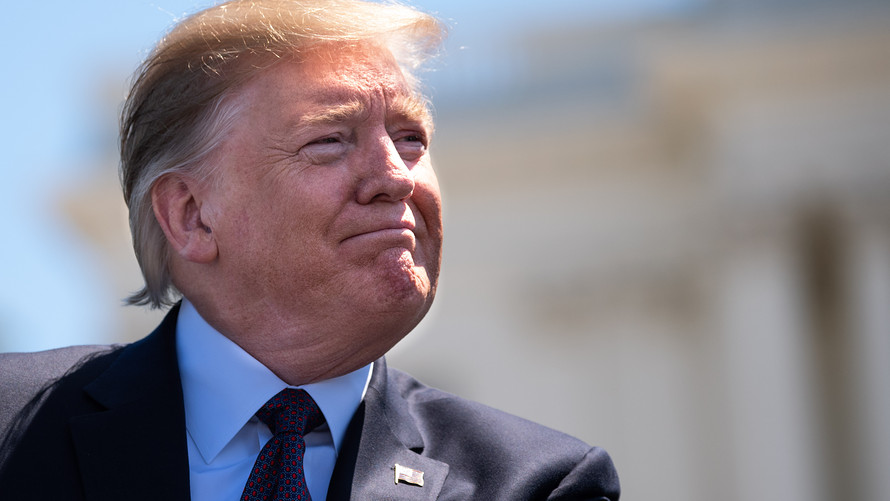 President Donald Trump announced new tariffs against all products imported from Mexico, saying that they would stay in effect until the illegal immigration problem was solved, a move that hit U.S. stock futures and the Mexican peso.

“On June 10th, the United States will impose a 5% Tariff on all goods coming into our Country from Mexico, until such time as illegal migrants coming through Mexico, and into our Country, STOP,” Trump tweeted . “The Tariff will gradually increase until the Illegal Immigration problem is remedied at which time the Tariffs will be removed.”

In a separate statement, Trump blamed Mexico for not doing enough to stop illegal immigrants from Central America crossing into the U.S., saying “Mexico has not treated us fairly.”

Trump said the tariffs will rise to 10% on July 1 if the crisis persists, and by another 5% for every successive month, up to 25% by Oct. 1. “Tariffs will permanently remain at the 25 percent level unless and until Mexico substantially stops the illegal inflow of aliens coming through its territory,” Trump said.

Trump said he is enacting the tariffs under the 1977 International Emergency Economic Powers Act, which gives the president the authority to regulate commerce during a national emergency.

In a conference call with reporters Thursday night, acting White House chief of staff Mick Mulvaney was asked for a metric of success that will indicate when tariffs can be removed. “We did not set a specific percentage or specific number,” Mulvaney said, adding that the administration will assess the situation “on a day-to-day and week-to-week basis.”

“We’re going to judge success here by the number of people crossing the border and that number needs to start coming down immediately, in a significant and substantial number,” he said.

In a tweeted message to the Trump administration Thursday night, Mexico’s President Andrés Manual López Obrador said he’s not seeking confrontation and that social problems cannot be solved by taxes or coercive measures. He also said he’s sending his foreign minister to Washington on Friday to discuss the matter further.

López Obrador wrote in that public letter to Trump that Mexico is doing its part to avoid migration through its territory as much as possible, without violating human rights.

The Mexican leader also urged Trump to “please, remember that I do not lack valor, that I am not a coward nor timorous but rather act according to principles.”

Jesus Seade, Mexico’s undersecretary for North America and top trade negotiator, said Thursday night that Trump’s move is “most serious,” the Associated Press reported, and that if the tariffs go into effect, “we should respond in a forceful way.”

The economic effect could be severe on both sides of the border. Mexico is America’s third-largest trade partner, with $346.5 billion in goods imported from Mexico in 2018, according to the U.S. Trade Representative. Tariffs are essentially import penalties on U.S. companies, which will likely raise prices for consumers.

Trump’s announcement could also derail the United States-Mexico-Canada Agreement, the successor to the North American Free Trade Agreement. Earlier Thursday, the Trump administration triggered the process for submitting a bill to Congress that would implement the new trade deal with Canada and Mexico, the Associated Press reported.

That move upset Democrats, who said more time was needed to review it. House Speaker Nancy Pelosi, D-Calif., said the effort “indicates a lack of knowledge” by the White House on how to pass a trade agreement.

“This is a misuse of presidential tariff authority and counter to congressional intent,” Sen. Chuck Grassley, R-Iowa, chairman of the Senate Finance Committee, said Thursday night, according to the Associated Press, adding that it “would seriously jeopardize passage” of the new trade deal.