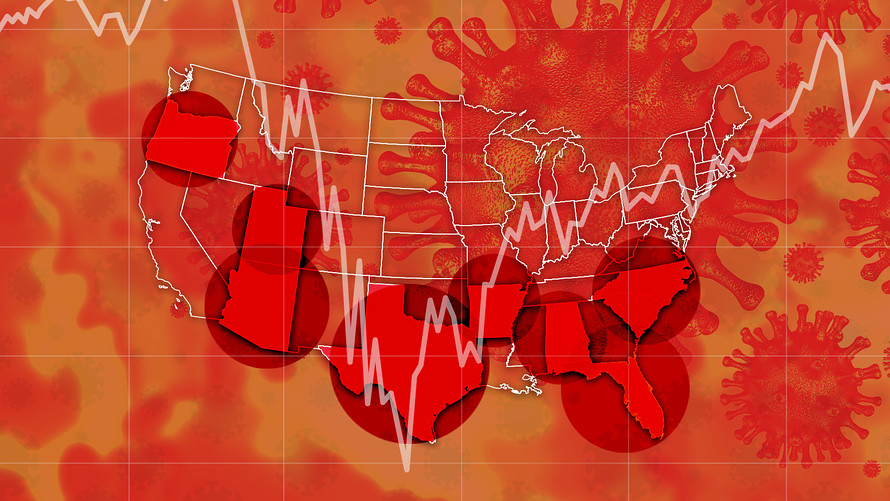 Flare-ups of COVID-19 in the U.S. have delivered a fresh gut check to bulls on Wall Street in the past week, following an unprecedented market rebound from the coronavirus-ignited downturn back in March.

The number of new confirmed cases of the coronavirus illness COVID-19 set a fresh record in the U.S. on Thursday of almost 40,000, according to data aggregated by Johns Hopkins University.

A rise in hospitalizations and deaths in states in the southern and western states of the U.S. have accelerated and threaten to reverse, or stall, plans to reopen economies nearly frozen for months to limit the spread of the deadly contagion.

Read: Why one strategist is actually encouraged by a spike in new U.S. coronavirus cases

On Friday, Florida banned alcohol consumption at its bars and Texas Gov. Greg Abbott issued an executive order that closes all bars in that state, further limited restaurant capacity and restricted certain outdoor activities, including tubing and rafting. That action came a day after the state reimposed a ban on elective surgeries, to keep space for COVID-19 patients.

Arizona also has paused their efforts to reopen as hospitals approach full capacity.

President Donald Trump traveled to Arizona on Wednesday for an event at a megachurch in Phoenix attended by about 3,000 mainly youthful supporters and a visit to a section of wall along the southern border, on which he signed his autograph.

Read: Fauci says in 40 years of dealing with viral outbreaks, he’s never seen anything like COVID-19

Coronavirus cases reportedly have been increasing among people between the ages of 22 and 44, notably in Arizona and Texas.

While the ramp-up in infections may not represent a “second wave” — most experts say we remain in the first wave in the U.S., and at least one has observed that a forest fire might be a more apt description than first, second and subsequent waves — the equity market on Wednesday suffered its biggest selloff since June 11, with the Dow Jones Industrial Average /zigman2/quotes/210598065/realtime DJIA +0.17% and the S&P 500 index /zigman2/quotes/210599714/realtime SPX +0.06% ending the session 2.4% or more lower and the Nasdaq Composite Index /zigman2/quotes/210598365/realtime COMP -0.87% closing down 2.6% on Friday.

Over the course of this pandemic, some market experts have sought to evolve into armchair epidemiologists, assessing the implications of the rising tide of infections in the U.S. and around the globe.

Thomas Lee, head of Fundstrat Global Advisors, in a research report Monday, said that the biggest implications were on policy. “This raises many questions but the most important is the policy direction. Given the surge in COVID-19 cases, states and the U.S. need to mitigate transmission — [which is to say] course correct,” wrote Lee.

Thirty-three states on Tuesday recorded a seven-day average of new cases that was higher than their average during the past two weeks, according to the Wall Street Journal’s analysis of data from Johns Hopkins.

Ironically, elevated infections and hospitalizations in clusters across America, compelled New York — formerly an epicenter of the global pandemic — to instate a quarantine on travelers visiting from Alabama, Arkansas, Arizona, Florida, North Carolina, South Carolina, Washington, Utah and Texas. New York is rolling out the 14-day quarantine protocol in coordination with Connecticut and New Jersey, states that also have seen cases stabilize in recent weeks.

Trump, slated to travel to his Bedminster, N.J., golf resort this weekend, won’t abide by the quarantine, according to a White House deputy press secretary. New Jersey Gov. Phil Murphy noted on CNN that there is a “carve-out” in the quarantine order for essential work.

Fundstrat’s Lee wrote that one of the fears for investors is that the jump in infections will force a broader reinstatement of stay-at-home orders, which are viewed as politically and economically unpalatable after three months of such procedures in much of the world.

“The last resort is likely reinstate shelter at home,” Lee wrote. He said the “best solution, probably, but also the most unpopular, is [to] require usage of masks.”

Lee provided a list of 10 public-policy steps that could be implemented to curtail a surge in COVID-19 infections: