It was the week that was.

An election outcome that caught most by surprise catapulted shares into a high-volatility orbit on Wednesday and Thursday, before the action settled down somewhat on Friday.

The theme of the week was to capitalize on those industry groups that were discounting the benefits of a Donald Trump presidency. Those included banking , with talk about rolling back Dodd-Frank; biotechnology /zigman2/quotes/210598458/delayed BTK -0.72% , freeing itself of the shackles of an expected fight on drug prices by a Hillary Clinton administration; and industrial /zigman2/quotes/202026558/composite XLI -0.87% , responding to Trump's promise for a substantial infrastructure-spending program.

The banks and brokers , discussed here numerous times as longer-term leading indicators, exploded on word of Trump's election upset. In itself, this is enough to expect the S&P 500 Index /zigman2/quotes/210599714/realtime SPX -0.15%  to hit new highs sooner rather than later. 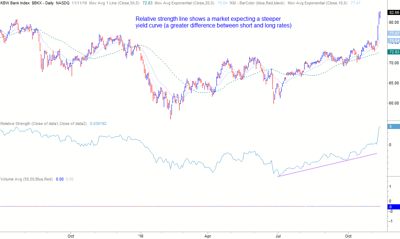 Another feather in the market's cap was the strength seen in small-capitalization issues /zigman2/quotes/209961116/composite IWM -1.44% on Wednesday, Thursday and Friday. In part, this was due to the large number of smaller banks responding to the week's sharp rise in the 10-year yield from 1.78% to 2.12%. The market generally does not get into trouble until after smaller names go through a period of underperformance first. 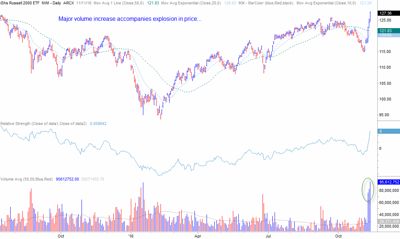 One negative that arose was in the area of breadth, specifically the inability of the cumulative daily NYSE advance-decline line to keep up with the S&P 500, as shown in the chart below. Breadth measures like this, however, usually take some months of deterioration prior to a primary top in the averages. 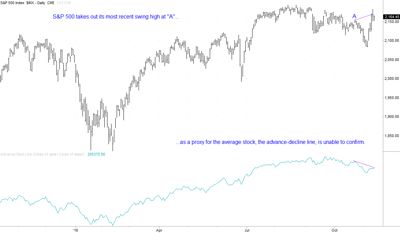 Among the names, Colucid Pharmaceuticals is a biotechnology company that went public 18 months ago. It’s a development company focused on treating migraine headaches. Net losses were recorded in each of the past three years. Most analysts on Wall Street who follow Colucid are expecting more losses this year and next.

From an initial public offering price of $10, the stock built a long base in its first 16 months of being a public company. However, in September the shares cleared their base and doubled in one day en route to nearly a 300% gain in four weeks.

Since then, CLCD has been forming a six-week consolidation as it digests its outsized September gain. Of note is the dry-up in volume in this pattern. This objectively says that profit-taking following the giant advance is not worrisome.

Aggressive speculators may wish to consider letting the price spend a few more days in sideways mode before entering on a break of the all-time high of $39.27.

As always, a protective stop should be used to mitigate risk, along with a starter position that is half normal size, or less. This initial position could be added to if the stock proves itself. In most cases, a position should not be entered when price is extended, i.e. more than 5% past the top of its base.