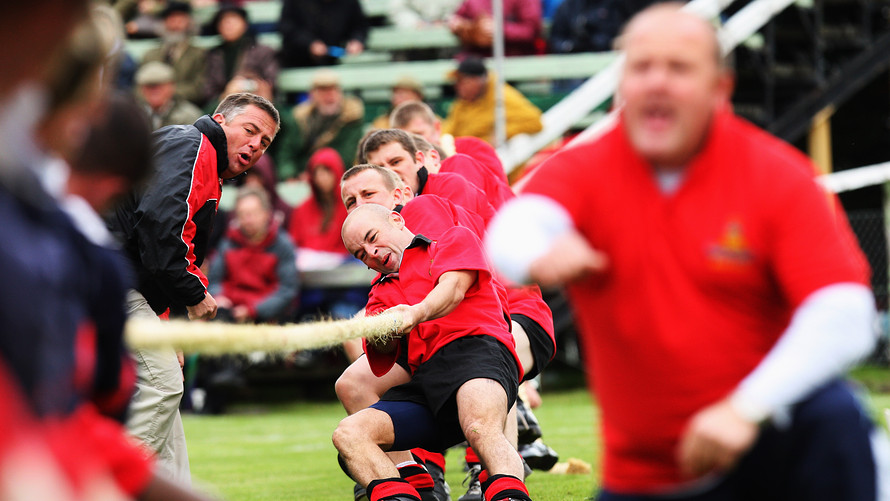 Getty Images
Fighting to a draw?

Another rally, another close well off the highs. The stock market’s inability to hold big opening gains — or big opening losses — is leaving some traders a bit frustrated.

The S&P 500 /zigman2/quotes/210599714/realtime SPX -2.08%  opened sharply higher Wednesday as stock markets charged out of the gate, ostensibly on optimism tied to more feel-good headlines surrounding U.S.-China trade talks. The index managed to hold on to a gain, ending more than 14 points higher at 2,651.07, a gain of 0.5%. But that was well off a session highs.

To Mott Capital Management’s Michael Kramer it was clear evidence that “neither the bulls nor the bears are in charge,” and he knows who to blame: algorithmic trading programs.

The S&P 500 had rallied toward technical resistance at 2,686, he noted, in a Wednesday blog post , and then “it was the gap- filling Algo’s that went to work bringing the S&P 500 lower. It is what it is, I guess. I can’t say I’m surprised. Disappointed, but not surprised.”

Read: A rare batch of selling suggests the stock market may have just hit ‘rock bottom’

This came after a stock market rally on Tuesday also gave way to selling, which left indexes lower on the day, with the Dow Jones Industrial Average /zigman2/quotes/210598065/realtime DJIA -1.78%  giving up a more-than-300-point gain.

And on Monday it had been the bears’ turn to feel the frustration, with stocks roaring back from steep losses to end slightly higher, marking the S&P 500’s biggest one-day, upside reversal since early February.

Stocks ended mostly lower Thursday, with the S&P 500 taking back early gains to end fractionally lower while the Dow finished in positive territory.

Reversals have indeed become more common. Data compiled by Dow Jones Market Data shows that the S&P 500 has closed either 1% below its intraday high or 1% above its intraday low 76 times in 2018. So far, that’s the most since 2015, when that occurred 82 times. In 2017, a year noted for its placid market behavior, the phenomenon was seen only six times.

Some analysts argue that it’s all just a return to normalcy, with traders and investors struggling to adjust after a period of extraordinarily subdued volatility.

And the market’s difficulty in holding on to gains, meanwhile, may not be that uncommon coming amid a stock-market selloff that batted the S&P 500 back into correction territory last month. Both the S&P 500 and Dow remain in negative territory for the year to date.

Check out: Here are the 4 biggest risks to the bull market in stocks for 2019: HSBC

Analysts at Bespoke Investment Group said Tuesday’s session marked the fifth consecutive session in which the S&P 500 traded down 1% or more from its opening level at some point during the trading day — a streak the index broke on Wednesday. The last time stocks suffered such a streak was in August 2015 when markets saw a bout of turmoil surrounding China’s devaluation of the yuan.

“We’re still far from really extreme levels in this streak, though. Back during the financial crisis, we saw ten straight days of similar intraday selloffs,” they said, in a post (see chart below). 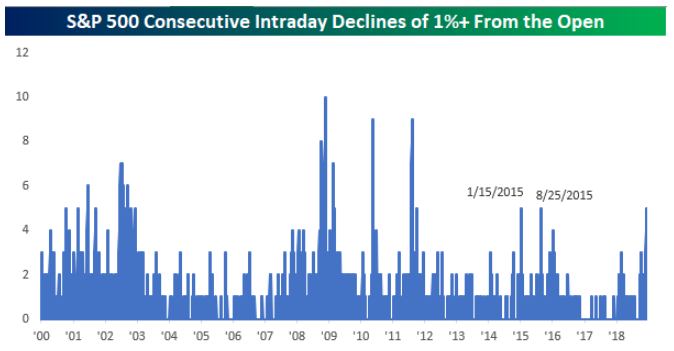 Big rallies off intraday lows may also be a feature of falling markets, but may a silver lining, according to T.J. Thornton, head of U.S. equity product management at Jefferies.

“We looked back to 2000 and ranked the days by the biggest positive delta between the close and the low. You find that these days do tend to coincide with trading lows,” Thornton said in a note late last week (see chart below). 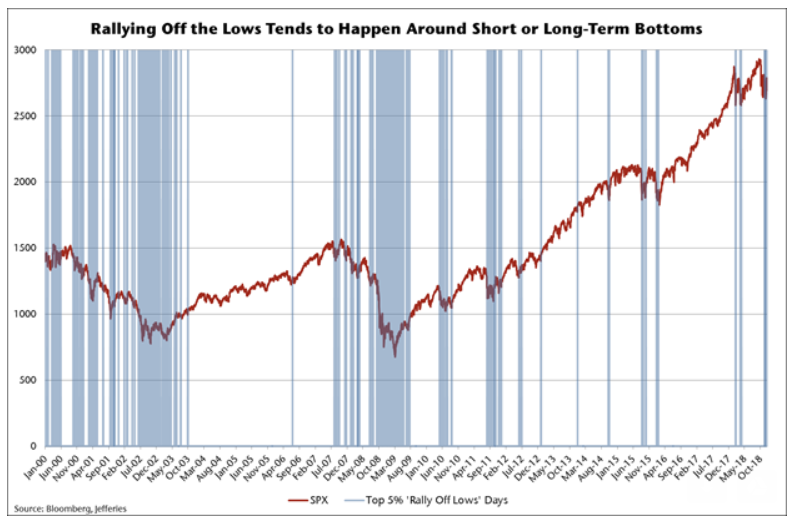 “Actually, they very rarely come around tops, but are very common around bottoms. That doesn’t help you to understand exactly when the bottom will come, whether it was Friday or whether it’ll be weeks from now, but if you’re wondering whether the phenomenon signals anything, it’s more of a sign of a bottom and outside of recessionary periods, those sort of days tend to pile up close to the lows, rather than well ahead of those lows,” Thornton said.