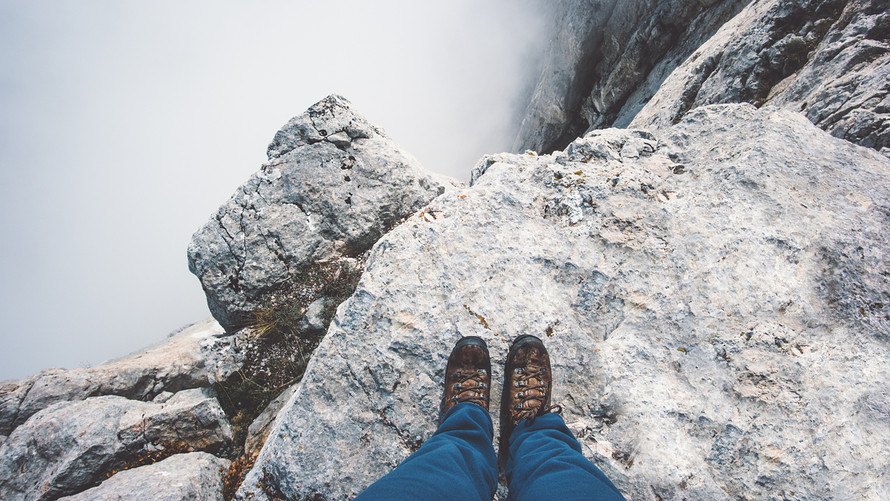 Don’t expect the stock market to rise much between now and the end of the year. In fact, U.S. stocks are more likely to decline.

This downbeat forecast is just the opposite of what contrarians were foreseeing a month ago, when contrarians concluded that new market highs were in store.

Read: As the market hits new highs, most stocks are sinking

How bullish are the market timers right now? Consider the average recommended equity exposure among a subset of several dozen short-term stock market timers that my firm monitors on a daily basis. (This average is what’s reported by my Hulbert Stock Newsletter Sentiment index, or HSNSI.) Right now, as you can see from the accompanying chart, this average stands at 65.6%. That’s higher than more than 95% of all daily readings since 2000. 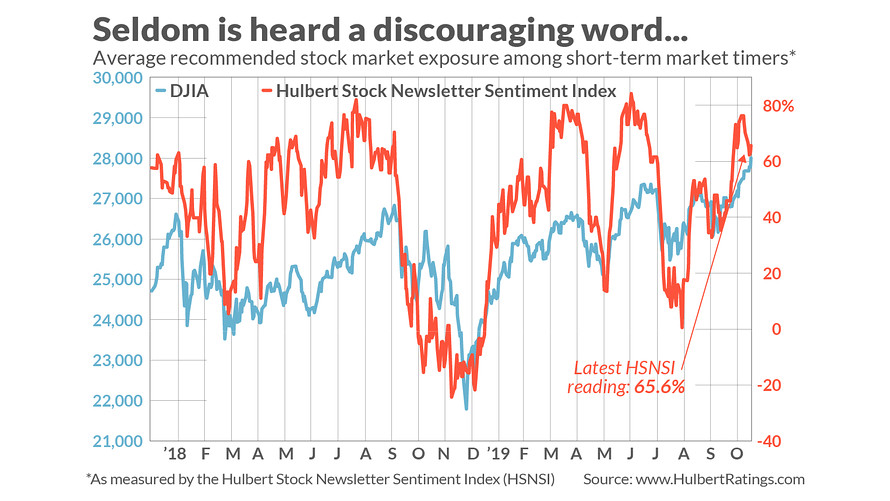 This bullish enthusiasm has been evident over the last couple of trading sessions. On Nov. 15, in the wake of rumors that a trade deal with China was imminent, the stock market soared and both the Dow Jones Industrial Average /zigman2/quotes/210598065/realtime DJIA +1.09%   and the S&P 500 /zigman2/quotes/210599714/realtime SPX +1.52%  rose to new all-time highs. Yet, when on Monday of this week those rumors were called into question, the stock market didn’t fall back to where it stood prior to last week’s rumors.

This “heads I win, tails you lose” behavior is a classic sign of irrational exuberance.

Read: Why Dow 28,000 could mark that ‘blowoff top’ bears have been predicting

To illustrate the short-term bearish consequences of this much bullishness, the table below reports the performance over the past two decades of the Russell 2000 index /zigman2/quotes/210598147/delayed RUT +0.40%  in the wake of the 5% of readings that were the highest. I chose to focus on this index since prior academic research has shown that small-cap stocks are particularly susceptible to swings in retail investor sentiment.

The table also shows the Russell 2000’s returns subsequent to the other 95% of that distribution.

To be sure, the negative returns in the first row of the table reflect averages, and sometimes the market declines by less. The key to how far the market is likely to fall over the next few weeks is how the market timers respond when the market hits a rough patch. If the timers run for the exit at the first sign of trouble, then it will take a relatively mild decline to create the sentiment foundation for the subsequent rally.

If the market timers stubbornly hold to their bullishness in the face of market weakness, in contrast, then contrarians will be watching for a deeper decline.

In the meantime, the usual qualifications apply: Contrarian analysis doesn’t always work. Even when it does, it is only a short-term indicator — telling us nothing about the longer term trend. Nevertheless, to the extent contrarian analysis is right, in a couple of weeks the market is likely to be lower than where it is now.

More: Why a ‘Santa Claus rally’ for stocks is no more real than Kris Kringle himself

Plus: When ‘idjits’ mock Warren Buffett, the stock market could be in trouble