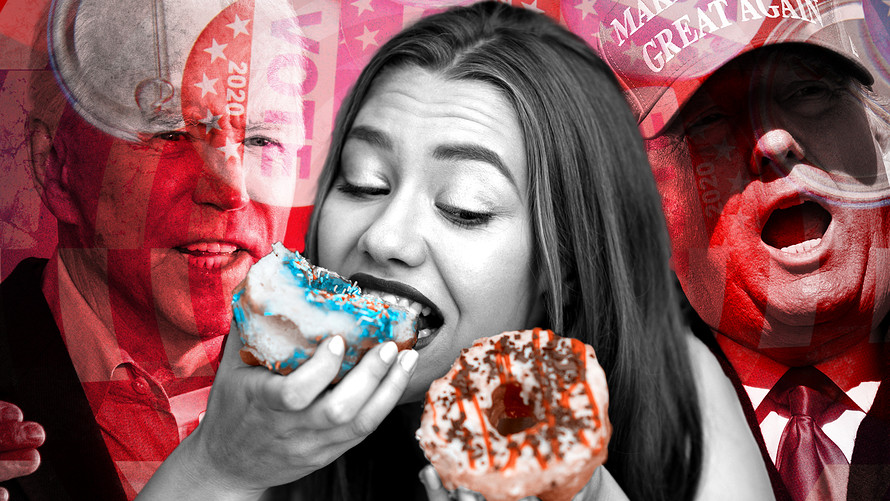 And now we wait. And eat.

Today is the day when Americans (who haven’t already voted early) will cast their ballots for either President Donald Trump or his Democratic challenger Joe Biden. But it’s not necessarily the day when we’ll know who won, since counting mail-in and absentee ballots could delay confirming the results for days, if not longer. The contested 2000 presidential election wasn’t called for George W. Bush until December, after all. And the country wasn’t in the midst of a deadly pandemic then.

So naturally, many people are planning to soothe themselves with comfort food (and cannabis, and booze) while they wait for the results to come in. The first polling places close at 6 p.m. Eastern.

A reddit thread called “What are you stress eating on election night ” was among the most-read topics on the online forum’s home page on Tuesday morning, for instance, drawing thousands of comments. Some clear trends emerged, including cheesy and starchy dishes like pizza, nachos, french fries and tater tots, as well as sweet treats including ice cream, chocolate and leftover Halloween candy.

Voters were also tweeting images of their Election Day stockpiles on Tuesday, and one user shared a snapshot of his local supermarket’s Ben & Jerry’s ice cream case, which was picked clean.

Some people also admitted that they intend to indulge in vices such as alcohol, cigarettes and cannabis while riding out one of the most pivotal elections in our nation’s history, which comes in the midst of a pandemic that has infected at least 9.3 million Americans, and killed more than 230,000.

That’s not surprising, considering more than two-thirds of U.S. adults surveyed by the American Psychological Association (68%) said that this election is a source of “significant stress,” compared with the 52% who said the same in 2016. And a OnePoll survey of 2,000 American adults found that 55% claim that Election Day 2020 will be “the most stress-filled day of their lives.”

Read: ‘Worry isn’t going to get the election result that we want’: 5 things to do on Election Night instead of freaking out

Some brands are capitalizing on this buzz and uncertainty, of course, by offering Election Day freebies and discounts for voters.

Krispy Kreme is doling out one free Original Glazed Doughnut per guest at participating stores, for example. And McDonald’s /zigman2/quotes/203508018/composite MCD -0.54%  is giving away one of its new pastry items per customer — including apple fritters, blueberry muffin and cinnamon rolls — with the purchase of a hot or iced coffee through its app.

If it’s burgers you crave, Boston Market is dishing out one free slider per guest, no purchase necessary, after 9 p.m. And White Castle offers $4 off orders of $20 or more through Grubhub, Uber Eats and Postmates on Tuesday. Or, Wendy’s is giving away one free Classic Chicken Sandwich with any purchase for customers who download the mobile app.

DoorDash and GrubHub /zigman2/quotes/210404212/composite GRUB +2.14% are also offering deals for those getting takeout on Tuesday. DoorDash offers free delivery on all orders $15 and up with the promo code VOTE, while DashPass members (who already get free delivery on orders over $12) can enjoy 10% of their orders with the code DPVOTE. Grubhub will feature more than 30 discounts in the Perks tab of its Grubhub and Seamless apps for places like 7-Eleven and Burger King.

Looking for something stronger? Chili’s is pouring its Presidente Margarita for just $5 on Election Day, and handing out commemorative stickers.

And poll workers with badges can get free meals from Chopt and Dos Toros Taqueria (for entrees up to $15 at both restaurants) and a free sandwich from Shake Shack /zigman2/quotes/209397077/composite SHAK -5.66% as thanks for their public service.

Meanwhile, Uber /zigman2/quotes/211348248/composite UBER -4.14%  and Lyft /zigman2/quotes/208999293/composite LYFT -2.41%  are offering discounts on trips to the polls . Lyft riders can hail a 50% discount on one ride to a polling station or ballot dropbox with a $10 limit using the code 2020VOTE, and the company is also working with nonprofits like More Than a Vote and Student Veterans of America to give free rides in certain areas. Uber has listed polling stations in its app, and offers 50% off rides to and from them, up to a $7 discount each way. It has also teamed up with Pizza to the Polls to help coordinate free food requests for voters waiting in line.

Some voters told MarketWatch that they are worried about civil unrest and violence following the election. A YouGov survey of 1,500 Americans released in early October found that more than half of respondents expected to see violence because of the election.

So both Trump and Biden supporters have also been stocking up on cash, food, gas and even things like butane-fueled stoves in case the electricity goes out for an extended period.

Read : Both Trump and Biden voters are stocking up on cash, gas and food to prep for possible Election Day unrest — ‘It’s not a natural disaster. It’s an election’

Once you’ve stocked up on your snacks and essentials, you can hunker down to watch the election results come in — or tune into literally anything else to take your mind off all of it. Here’s a list of 20 shows to stream if you need to escape the stress of Election Night.