Strikes are 257% up in 2 years, even though labor union membership is down — why more workers are taking a stand 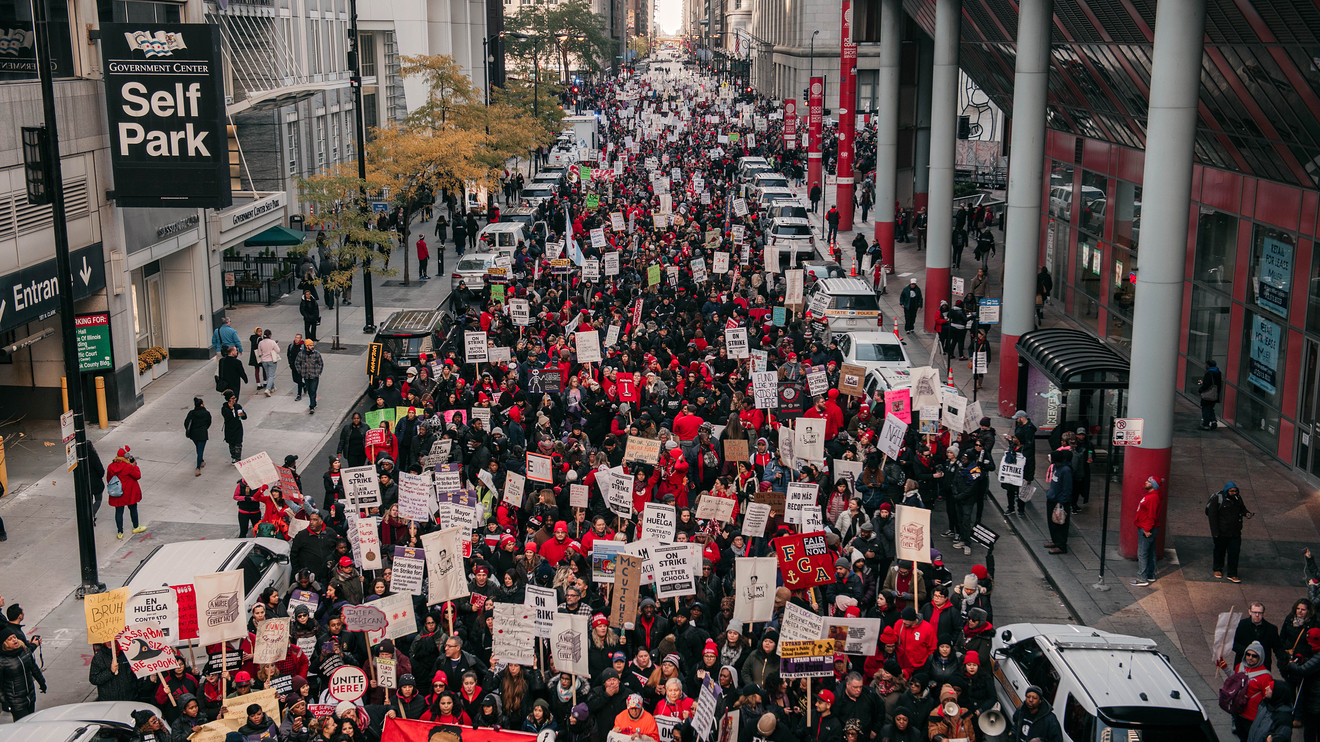 Scott Heins/Getty Images
Chicago public school teachers and other teachers taking the streets during an 11-day strike in October 2019.

The number of work strikes and the number of union members are going in opposite directions, and that divergence is highlighting an important fact about today’s job market, experts say.

During the past decade, there have been an average of 15 major work stoppages a year, according to the agency. The last time there were more major stoppages was 2001, when there were 29.

While strikes appear to be on a relative upswing, labor union ranks keep dropping, BLS has noted. Organized labor membership fell to a record low last year, with 10.3% of all working Americans in a union. That’s down from a 10.5% membership rate in 2018, and continuing a decades-long membership slide.

So why are there more worker protests even though there are fewer workers formally banding together in the first place?

Labor experts from both sides of the aisle say the paradox points to one conclusion: Workers are emboldened to press for better pay and work conditions because they believe they have options in an economy with a 3.6% unemployment rate and employers that are focused on attracting and keeping staff.

The picture looked different during the Great Recession, Malanga said. There were five work stoppages in 2009 and 15 in 2010, BLS numbers show. “Companies are desperate for workers, struggling to find new workers and don’t want to lose experienced workers ... There’s an opportunity now, and [workers] are taking it,” he said.

Sure, more people were ready to speak up — but that’s also a sign of their mounting frustration, said Heidi Shierholz, policy director of the left-leaning Economic Policy Institute. “If even this very tight labor market can’t deliver strong wage growth to me, I’ve got to try something else,” said Shierholz, who noted the country’s growing divide between the rich and everyone else.

That divide, she said, has been worsened by companies that are hostile to organized labor pressing for better wages. Employers spend almost $340 million every year hiring “union avoidance advisers” according to Economic Policy Institute estimates.

Several factors have contributed to the long slide in union membership, starting as early as the 1947 Taft-Hartley Act, which, among other things, allowed the establishment of “union shops” at a business only after a majority of workers voted for the idea. The law also prohibited unions from donating to political campaigns.

Globalization over the decades also cut into membership, as outsourcing led to fewer factory jobs. Another key moment happened in 1981m when then-President Ronald Reagan fired most of the 11,345 unionized air traffic controllers who walked off the job. That mass termination set the tone for management, Lawrence Mishel, a labor-market economist at the Economic Policy Institute, said last year.

More recently, state-level “right to work” laws have eaten into membership, union advocates say. The laws can let workers enjoy the benefits of a union contract, but prohibit unions from collecting fees from the benefitting non-union workers. Organized labor proponents like the Economic Policy Institute say that can make it harder for unions to support themselves financially .

A “work stoppage” is when at least 1,000 workers miss at least one shift, BLS says. The agency doesn’t distinguish between strikes, when workers walk off the job, and lock-outs, when employers refuse to let employees work. But BLS records show stoppages are primarily strikes.

To be sure, the BLS records show unions led all the formal work stoppages last year. Daniel DiSalvo, also a Manhattan Institute senior fellow, noted many of the strikes came from public sector workers, including teachers in Chicago, Denver and Los Angeles. Rising costs to pay retiree pensions were squeezing money for teacher salary increases, he said.

But the BLS tally doesn’t include other 2019 worker protests, like when thousands of Uber /zigman2/quotes/211348248/composite UBER +4.65%  and Lyft /zigman2/quotes/208999293/composite LYFT +3.64%  drivers protested pay and working conditions for several hours in May, ahead of Uber’s IPO. The formal tally also didn’t count when McDonald’s /zigman2/quotes/203508018/composite MCD +1.24%  workers, joined by some Democratic presidential candidates, protested ahead of the fast food giant’s shareholder meeting.

GM referred to a previous statement from the auto maker’s CEO and chair, Mary Barra, who said the labor deal “delivered a contract that recognizes our employees for the important contributions they make to the overall success of the company.” UAW did not respond to a request for comment, and neither did McDonald’s. Representatives for Uber and Lyft declined to comment.

The recent number of strikes are small by historical standards

There may be an increasing number of strikes in recent years, but BLS numbers show it’s still nothing compared to decades earlier. BLS has been tallying work stoppages since 1947 and the all-time high was 470 in 1952.

Earlier this month, President Donald Trump emphasized the economy’s strength during his State of the Union speech, saying it’s “the best it’s ever been” and the country was enjoying a “blue-collar boom.”

Democratic critics said Trump was glossing over major problems for average Americans, one of which being their paychecks. “Wages have stagnated, while CEO pay has skyrocketed,” Michigan Gov. Gretchen Whitmer said in her response.

Real wages, adjusted for inflation, have stagnated for several decades, experts say. During a strong January jobs report, federal numbers showed worker pay grew 3.1% over the past 12 months, slightly off the postrecession peak of 3.5%.

Joining a picket line is just one way workers could try improving their situation, Malanga said. So is marching into a supervisor’s office to ask for a raise, he added. Almost half of workers surveyed by Bankrate received a pay raise last year, up from approximately 40% a year earlier.

After the Great Recession, “this economy is creating an opportunity to make up for lost time,” Malanga said.

But Shierholz doesn’t think the job market is working as it should, even if more workers are speaking up. “We know the economy is not always going to be this good. We need a structure that will deliver decent wages,” she said.

While the GM strike grinded on, some workers said they were walking off the job to press for fair treatment and others said it was to fight for a middle-class life. One worker told NPR she saw “opportunity” at her job. “I really feel like it will work out for the better,” she said. “I just think that it’s going to take time to get there.”