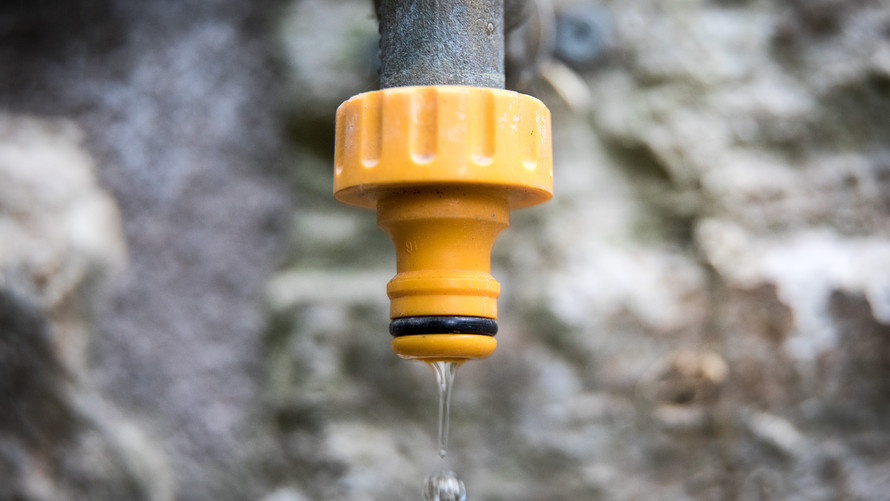 Investors looking at the Chicago Mercantile Exchange’s indicator of the chance of a Federal Reserve interest rate-cut this week may be surprised to find that the probability of the Federal Reserve easing policy for the second time this summer only stands at 61%.

“Those numbers are ludicrous,” said Jonathan Hill, a rates strategist at BMO Capital Markets, in an interview.

Market participants say those probabilities don’t reflect the general consensus that the U.S. central bank will pull the trigger again on Wednesday. Rather, it points to troubling stresses building up in Wall Street’s plumbing as investors complain that a lack of liquidity in the system to meet a surge of demand for cash has resulted in a jump in short-term borrowing costs.

The lack of cash circulating in short-term money markets has pushed up the effective fed funds rate, the actual level at which banks lend to each other overnight. As a result, Hills says the CME’s tracker of rate decision probabilities may be reflecting the odds for the effective fed funds rate to remain elevated due to this week’s funding squeeze, rather than expectations for the fed funds target range going forward.

See : Treasury is about to flood the market with debt to fund U.S.’s $1 trillion deficit — and that is a concern

The effective fed funds rate, the actual level at which banks lend overnight, jumped above the interest rate on reserves that bank keep in excess of their reserve requirements (IOER) by 15 basis points as of Monday.

Usually, this is seen as a temporary state of affairs because banks have no incentive to borrow from another bank when it could simply withdraw funds on deposit at the Fed, but the persistence of the fed funds rate above the IOER has raised questions whether the central bank is losing its grip over its benchmark interest rate.

Market participants have pointed to the sharp jump in the repurchase rate, or repo rate, on Monday and Tuesday as the most recent trigger for the higher fed funds rate. This key interest rate represents the amount that banks, dealers and hedge funds are charged for borrowing funds for a short period of time, in return for collateral such as Treasurys. This rate jumped as high as 8% on Tuesday, according to ICAP, even though it is usually expected to stick near the fed funds rate.

Investors tend to be nervous about a climb in repo rates as they’re usually associated with banking crises and credit crunches. Repo rates spiked back in the 2008 financial crisis when banks were unwilling to lend to each other amid questions about their solvency. 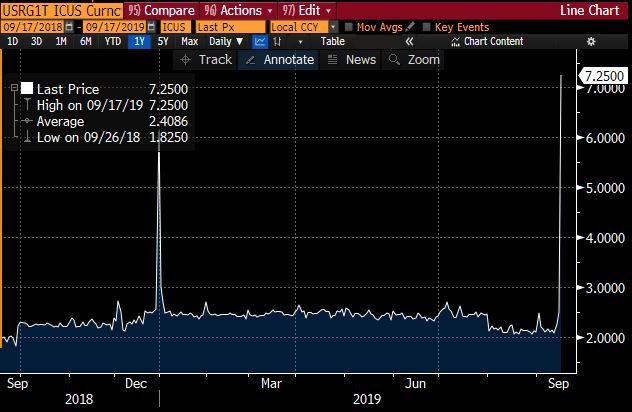 Analysts say a perfect storm of factors may have been responsible for the spike in repo rates this week.

The U.S. Treasury Department is rebuilding its cash reserves, after running them down to keep the government open, before Congress finally raised the federal debt ceiling in July. To do that the Treasury has been issuing a deluge of short term debt and parking the funds in its Treasury General Account (TGA) at the Fed.

In addition, the deadline for corporate tax payments in September fell on Monday. Investors pulled billions of dollars from short-term funding markets as companies redirected those funds to the Treasury Department. Analysts also cited the settlement of several debt auctions on Monday, and the lack of space on bond dealers' balance sheets.

“The TGA rebuild ... represents a large reserve drain and the withdrawal of this cash from money markets has materially tightened funding,” wrote Mark Cabana, head of short-term rates at Bank of America Merrill Lynch on Monday.

Most importantly, banks have seen their reserves drained by the shrinkage of the U.S. central bank’s balance sheet from Oct. 2017 to Sept. 2019, meaning they have less to loan out to liquidity-starved investors. It’s why some market participants have demanded the Fed to restart quantitative easing or bond buying.

“The Fed has reduced the level of reserves too much and will need to start growing its balance sheet again soon,” wrote Krishna Guha, vice chairman of Evercore ISI.

Read : Fed has a ‘tin ear’ to market concern over balance sheet

This week’s funding squeeze has drawn calls for the Fed to prevent another seize-up in short-term lending markets.

More immediately, investors say the central bank may tweak the IOER so the effective fed funds rate stays within its desired range. Others said the central bank needed to carry out repurchasing operations, in effect, temporarily buying securities from banks and boosting their reserves.

The New York Fed delivered on those expectations on Tuesday. It offered to buy $75 bln in the repo markets and dealers said it bought about $53 billion, and short term rates quickly dropped to normal levels as a result.