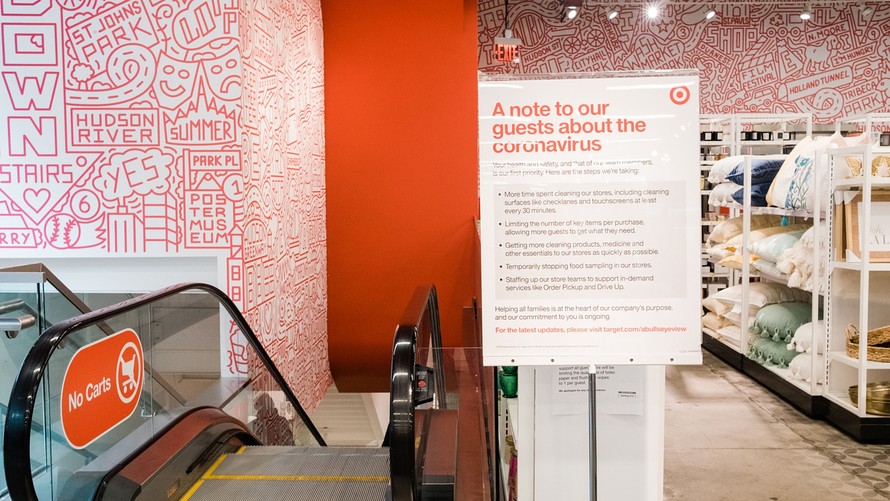 Bloomberg
Target has seen same-store sales spike due to the coronavirus, but costs have also soared.

Target Corp. saw same-store sales soar during the first quarter as customers stocked up on household necessities amid the coronavirus pandemic. However, costs also skyrocketed, putting pressure on margins.

Target (NYS:TGT)   said Wednesday that sales jumped toward the end of February, with same-store sales rising 3.8% for the month.

In March, same-store sales surged, along with traffic. Not only were customers buying disinfectant wipes, groceries and other essentials, sales were also cascading into other categories as families prepared to work from home and spend more time with their children.

Brian Cornell, chief executive of Target, told the media in a conference call that demand in categories related to office supplies and games increased.

However, sales for things like clothing fell, though Cornell noted that sales of leisure wear and pajamas have climbed.

Sales declines in higher-margin discretionary categories have put pressure on results, the company warned. Target has pulled its first-quarter and full-year guidance. In addition, it is suspending share buybacks.

First-quarter earnings are scheduled to be announced on May 20.

The retailer has also made investments in pay and benefits, has seen labor hours jump as stores require more sanitizing, and has added costs for the supply chain and merchandise volume. The company has announced that workers’ wages would go up by $2 per hour until at least May 2.

Those needs drove up costs an additional $300 million above Target’s previous outlook.

See: There are 382,000 job openings and counting as Amazon, Walmart, Domino’s and others hire to meet the coronavirus demand

The investments will continue, though at a slower pace.

Target said it will now remodel about 130 stores in 2020, down from the previous goal of 300. The retailer will complete the remodels that are underway and hold off on additional work until 2021.

And the company will launch 15 to 20 small-format stores this year, rather than the previously announced 36.

“We need to serve guests without distractions,” Cornell told media during the call.

Target has also postponed efforts to add fresh grocery and adult beverages to its Drive Up and Order Pick Up services.

Meanwhile, the company is expanding its additional hour of shopping, available to customers 65 and over, to both Tuesday and Wednesday.

Target is also adding signage, including decals on the floor, that will remind customers about social distancing. Kroger Co. (NYS:KR)   announced similar measures on Tuesday.

And starting March 26 and until further notice, Target will no longer accept returns and will no longer bag items in reusable bags provided by customers. Shoppers using their own bags will have to bag items themselves. And Target is extending its return policy by three weeks after April 16.

The coronavirus outbreak is a singular situation, Cornell emphasized, not only for retailers but for those at different points in the supply chain. Things have slowed in some respects; some items have taken time to replenish and home deliveries may take longer than a couple of days.

But in other ways, the retailer and its partners are ramping up to meet demand, and the supply chain is working.

“China is largely back up and running,” Cornell said. “Product is being produced and shipped.”

Under normal circumstances, a slowdown and recession takes time to build. Cornell highlighted how much has changed since the company had its investor meeting on March 3, just three weeks ago.

“America is essentially out of business,” he said on the media call. “It’s a unique environment and there is no playbook for how to react.”