Tesla ‘pulls rabbit out of the hat’ with surprise profit, and Wall Street applauds it 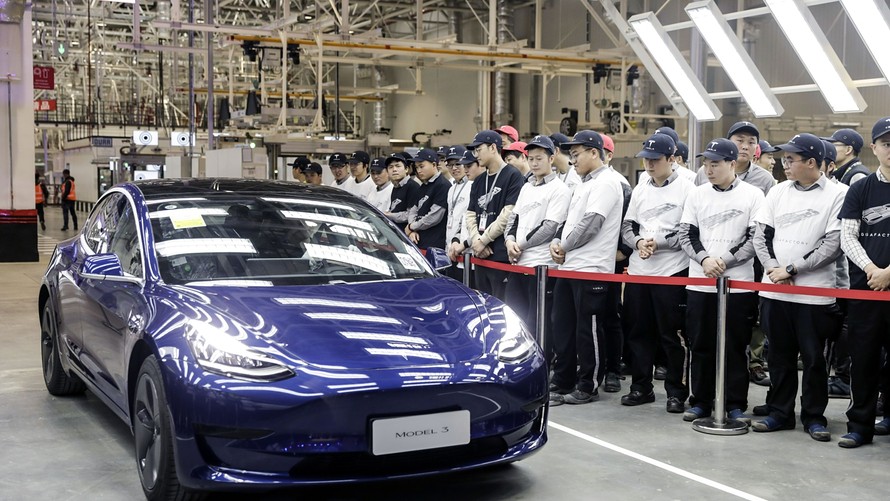 Bloomberg News/Landov
A Tesla Model 3 set for delivery at the company’s plant in Shanghai, China, in December

Tesla Inc. shares were enjoying praise from Wall Street analysts on Thursday, although some warned the coronavirus pandemic will bring further adversity in the next few months.

Tesla /zigman2/quotes/203558040/composite TSLA -2.48%  late Wednesday reported a surprise first-quarter profit, sending the stock soaring in the extended session. It held those gains even as Chief Executive Elon Musk veered off script and railed against shutdown orders that have kept Tesla U.S. factories closed in the middle of a post-results call with analysts.

The gains for the stock also held on Thursday, with the stock poised to close at its highest level since Feb. 21. The stock has gained nearly 60% in April, and remains on track for its best month since May 2013.

Tesla “pulls another rabbit out of the hat, and in short-term trading, the positives likely outweigh the negatives,” Evercore ISI Chris McNally wrote in a note Thursday.

Positives from Wednesday’s earnings report included news that the Model Y, the newest vehicle on Tesla’s lineup, was profitable out of the gate, a first for a Tesla launch and likely because it shares many components with the Model 3.

Tesla also appeared to leave intact its goal to sell more than 500,000 vehicles in 2020, saying it had the “capacity installed” to deliver that number “despite announced production interruptions.” It repeatedly assured analysts that liquidity is not a problem.

Food for bears, however, included $895 million in cash burn for the quarter, despite lower capital expenditures; no guidance, with Tesla saying it would revisit the outlook for 2020 when it reports its second quarter; and the likelihood that its main vehicle-making plant in Fremont, Calif., will remain closed through the end of May, following an extension of a regional shelter-in-place order.

Evercore analysts forecast production of between 60,000 and 65,000 vehicles in the second quarter, with Fremont making up to 35,000 and the Shanghai factory producing another 30,000.

The China factory was a highlight for analysts at Cowen.

“We have been impressed by the ramp at the China facility amid the COVID-19 shutdowns, with the Model 3 outselling local brand models in the depressed market,” the analysts, led by Jeffrey Osborne, said in their note.

Comments from Tesla executives suggested that gross margins “are already positive and ‘near’ Fremont levels despite capacity utilization still ramping,” the analysts said.

Tesla presented a “solid” first quarter, with a much-lower-than-expected drag from Model Y and the Model 3 ramp in China, said Toni Sacconaghi at Bernstein. “That said, regulatory credits of $354M were huge in the quarter – excluding them, (Tesla) lost money,” he said.

The second quarter “will be tough,” Sacconaghi said, but Tesla may still be able to deliver about 70,000 vehicles.

The Bernstein analyst forecast 435,000 deliveries for 2020, “given our belief that (a) demand for Tesla (and all autos) will be materially impacted by economic weakness this year; and (b) that Model Y demand may not be fully incremental to Model 3.”

The first-quarter report “illustrates that Tesla is on pace to generate strong margins in the intermediate to longer-term, and in turn drive material EPS growth,” analysts at Goldman Sachs said. The analysts, led by Mark Delaney, kept a buy rating on Tesla and raised their 12-month price target to $925 from $864.

Investors should brace for a worse second quarter, analysts at BofA Securities said.

Results then “will likely prove toughest with production restarts/ramps that continue to be pushed out, which may disproportionately hit (Tesla) by derailing its ongoing capacity/production expansion across its plants (Model Y in Fremont, Model 3 in Shanghai, Giga Berlin),” they said.

Analysts, led by John Murphy, ended their note with worries beyond “disruption from the COVID-19 pandemic.”

BofA remains “skeptical that TSLA has sustainably turned the corner on profits and cash flow, and rather believe that further growth will be accompanied by additional income and cash flow volatility,” they said.