Tesla unveils its Cybertruck: An angular electric pickup starting at $39,900 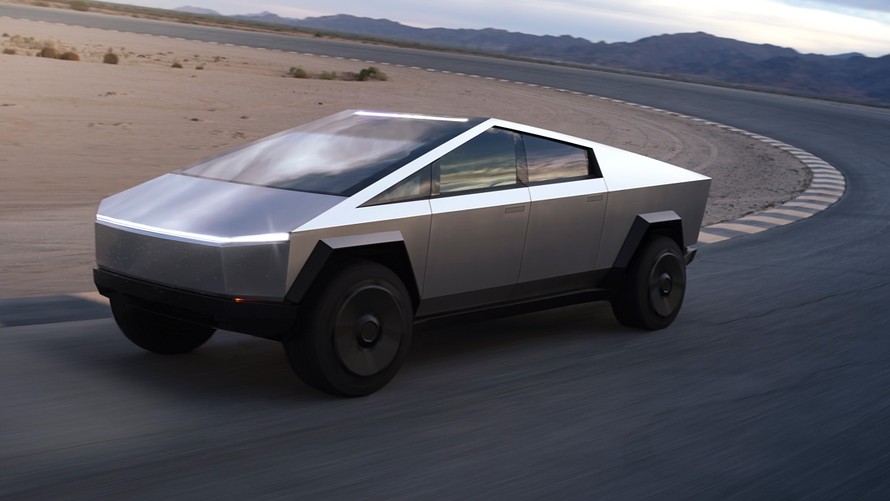 Tesla Inc.
Tesla's "Cybertruck" looks like nothing else on the road.

Chief Executive Elon Musk unveiled the vehicle, which has the angles of a stealth bomber, to an enthusiastic crowd of fans at Tesla’s facility in Hawthorne, Calif., in a presentation complete with lasers, smoke machines and electronic music.

“Doesn’t look like anything else!” Musk said as the vehicle drove out.

But shares of Tesla fell 2.5% in premarket on Friday. Historically, shares tend to outperform in the days before a new-car announcement, but the stock reaction after that has been mixed. After the most recent event, the unveiling of the Model Y, shares fell on concerns that the compact SUV could chip away at demand for the Model 3 and on broader demand concerns as well.

As for its newest creation, towing capacity ranges from 7,500+ pounds for the low-end version to 14,000+ pounds for the top- end. All three versions can carry a payload of 3,500 pounds, and Autopilot is standard.

Tesla’s website began taking refundable pre-orders Thursday night. Production is scheduled to begin in late 2021, though the tri-motor version won’t start production until late 2022. Musk did not say where the Cybertruck will be built.

The Cybertruck is made of an “ultra-hard” stainless steel alloy that Musk’s SpaceX is also using on its Starship rocket. An extra with a sledgehammer couldn’t dent the truck’s door, but a similar test of its “armor glass” went awry when two windows badly cracked after a steel ball was thrown at them.

“Room for improvement,” Musk quipped, trying to save the test by saying at least the ball didn’t go through the window. “Weird reason it broke now, I don’t know why,” he said.

Musk’s “one more thing” moment at the end of the presentation was a four-wheel all-terrain vehicle, which can fit in the cybertruck’s bed.

The Silicon Valley car maker had kept the design well under wraps, but Musk had called the pickup Tesla’s “best ever.”

Whether the pickup will be a niche offering or a significant contributor to Tesla profits remains to be seen. One in five vehicles sold in the U.S. is a pickup, and the body style is also one of the more profitable for auto makers.

See also: Tesla ‘Blade Runner’ pickup truck could be so futuristic that it leaves buyers cold

In the days leading to the reveal, some Wall Street analysts expressed worries that the truck would be so futuristic-looking as to leave traditional buyers of pickups unimpressed and uninterested. Others, though, have said hey believe there will be enough die-hard Tesla fans willing to line up to buy the truck.

“While this product announcement is long awaited and exciting, the main focus for the stock over the coming months is around the recent strong 3Q results and whether that level of higher demand and profitability is sustainable going forward into 2020,” Dan Ives with Wedbush said in a note Thursday.

Tesla late last month reported a surprise third-quarter profit and said that key projects, including its plant in China and its next vehicle, the Model Y, were ahead of schedule.