It was somewhere between the second and third dozen waffles that my assistant Ed and I went into a maple-syrup coma.

After rigorous testing of a spate of new waffle makers, we found that a lot has improved in recent years compared with your mother's waffle irons. The new machines come with a range of features, from digital displays to super-specialized cooking settings. Many of the units beeped, and some flipped over to make the batter spread out evenly. Others had compelling designs that you wouldn't be ashamed to leave out on the counter. The new bells and whistles didn't always translate into better waffles though.

The latest offering by Krups, owned by France's Groupe SEB is the $50 FDK2 Waffle Maker. This compact square of brushed stainless steel in a black frame has only two small light-indicator circles and looks more like a trendy laptop computer than a batter baker. Though small, yielding only two Belgian-style waffles (thicker, deep-pocketed and airier slices) a pour, it is powerful enough to cook a batch in only a few minutes. The drawback? While the unlabeled lights let you know when the unit is ready to cook, there is nothing to tell you when the waffle is done, so you have to eyeball it. That meant we ended up with a lot of under- and overcooked waffles.

On the other hand, Cuisinart (a Stamford, Conn., brand of Conair Corp.) has jazzed up the traditional large waffle maker while adding helpful features. Its hefty six-slice Traditional Waffle Iron has a flared base and a stainless steel finish with a nicely shaped handle. The $120 unit has a simple setting dial, numbered 1 to 6 (3 being a medium-colored waffle), that is idiot-proof -- if you can use a toaster, you can use this unit. There also is an audible tone that sounds when the unit is ready to cook or the waffle is done. The batches we made came out well. Overall, an excellent and sensible choice for anyone who makes waffles regularly. 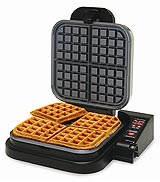 While Chef'sChoice Belgian WafflePro 850, which will be on the market in June, certainly gives the cook a lot of setting choices, we didn't like the look and feel of the appliance much. Made by a unit of Edgecraft Corp. of Avondale, Pa., this $180 waffle maker also uses a 1-to-6 dial and lets you set a time or pick between a crispy exterior and moist interior (which requires a hotter temperature but less cooking time) or a more uniform waffle. The unit also beeps when ready to cook and when the waffle is done. It is really nice to be able to adjust baking temperature and times, resulting in a range of different textured and nicely cooked waffles -- the best crispy waffles of all. As its makers promise, its use of steam to press the batter outward gave our waffles a uniform shape. Still, the setting panel sits on the side as if it has been awkwardly grafted on, which made it very hard to manipulate a waffle out of the machine. If the unit were less bulky, it would be one of the waffle irons to beat.

Look and feel is what attracted us to the Waring Pro Professional Waffle Maker, one of the flip units. This $130 appliance, also a brand of Conair, allows you to flip -- as a restaurant does -- the Belgian-style waffle, letting the batter flow more uniformly. (Flipping the waffle allows for more even baking of the top and bottom.) Besides the usual beeping feature, there are dial adjustments for doneness, all in a nicely designed package with a brushed stainless steel finish. The small round waffles that came out, though, were simply not as good looking as the others, lacking crispness or uniformity.

In addition, the small grid plates means you will be flipping a lot to get a load of waffles. Though these were the worst-looking waffles, they did taste great and were airier than the nonflip makers.

The real winner was the KitchenAid Pro Line Waffle Baker, made by a unit of Whirlpool /zigman2/quotes/200296850/composite WHR -2.74% Corp., of Benton Harbor, Mich. The flip-style unit produced perfectly cooked large waffles consistently. While pricey at $300, the muscled unit has a glowing blue digital time readout that turns a scary red when you leave the waffle in too long. The timer can be set from two minutes to more than five and an old-style dial gauge tells you when the unit is heated properly. With two nonstick cooking sides to the clamshell flip, you can make two large round Belgian waffles at once.

The Waffle Baker was simple to use, though it did take a long time for it to heat up. Once we opened up the grids, Ed and I were amazed by the perfection of our crispy, evenly browned waffles. "Let's shellac them and keep them," he said.

We did, with a copious dose of syrup instead.

Write to Kara Swisher at kara.swisher@wsj.com

See our revamped Personal Journal section with new features and online-only columns, tools and stories, along with the entire contents of the print edition.
About Kara Swisher Kara Swisher's obsession with home renovation began after reading "Martha Stewart's New Old House: Restoration, Renovation, Decoration, Landscaping." The classic over-the-top tome on a demented remodel of an ancient farmhouse by Ms. Stewart, who remains the patron saint of renovation, inspired Kara's own renovation of her 19th century Victorian home in San Francisco in 1999. The project came soon after she fell in love with an antique glass doorknob at a real-estate open house. Deep interest in stainless steel appliances, concrete countertops and paint samples soon followed. In her spare time, Kara is a technology writer in The Wall Street Journal's San Francisco bureau, where she writes on high tech issues in a column called Boom Town. She also is author of two books on the rise and fall of America Online. The first, "aol.com: How Steve Case Beat Bill Gates, Nailed the Netheads and Made Millions in the War for the Web," published in July 1998. The sequel, "There Must Be a Pony in Here Somewhere: The AOL Time Warner Debacle and the Quest for a Digital Future," was released this fall. In addition, Kara and Wall Street Journal "Personal Technology" columnist Walter Mossberg are the producers of a major annual Dow Jones conference on the digital future called D: All Things Digital. Kara can be reached at homeeconomics@wsj.com .
/zigman2/quotes/200296850/composite