The $1 trillion companies: Microsoft is still bigger and better than Apple

Microsoft’s key businesses are growing, and Apple has an innovation problem 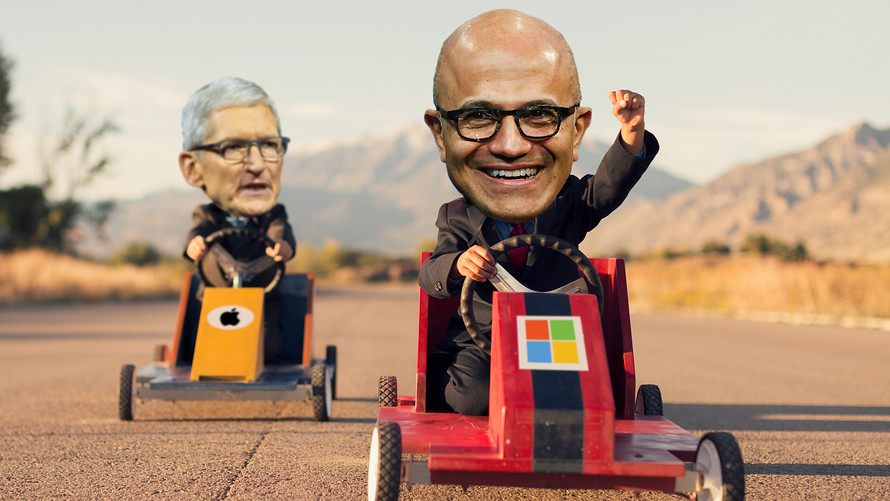 Late last year as Apple, Amazon, and Microsoft were trading the top spot for world’s most valuable company, I wrote about why Microsoft was the best positioned to solidify its position as No. 1.

One year later and Microsoft (NAS:MSFT) is still on top; its current market capitalization is sitting around $1.05 trillion while Apple (NAS:AAPL) moved back above $1 trillion Wednesday.

While these numbers are closer than they have been in the past three months, there is no question that Microsoft is better positioned to remain on top. Apple’s latest product launch serves as a strong testimonial to why this is the case and why Microsoft looks like the better long-term bet for investors.

I have been vocal over the past year about Apple’s innovation issues. The company is struggling to come up with anything new or original and has instead turned to copying and/or iteration to develop new markets. I have previously highlighted that the new iPhones, iPads, and MacBook have been nothing more than iterative over the last few launches. Tuesday’s unveiling was no different, as it delivered nothing surprising and nothing inventive. Instead it was personified by small changes the company nonetheless hopes will inspire customers to part with hard-earned dollars for an almost identical device and user experience.

True, Microsoft and Apple aren’t direct competitors in many of their core technology products and solutions. The growing popularity of the Microsoft Surface laptop has led to some competitive instances with iPad and MacBook, but the companies are largely approaching the broader market in different ways. It is because of these differences that Microsoft is far better positioned to maintain its lead.

Difference 1: Apple’s biggest profit and revenue source is declining while Microsoft’s is growing.

This past year, Canalys marked Apple’s iPhone sales down 17% for the year. The signs of slowing continue with the iterative launch and the lack of a 5G offering. Its most compelling growth areas have been AirPods ( 60% of market, per Counterpoint ) and Apple Watch ( 46% of market, per Strategy Analytics ), but the margins on those aren’t nearly as lucrative as the iPhone. Meanwhile, Microsoft Azure has seen over 60% growth in each of the past four quarters and its Dynamics 365 CRM business, is also growing over 40%. Surface is growing at a 14% clip year over year as it continues to gain momentum.

Difference 2: The markets for Enterprise SaaS, Cloud, and AI are screaming opportunities, while Consumer Subscription Services are quickly becoming oversaturated.

Microsoft is a recurring revenue machine for enterprise and consumers with its productivity suite of services. It is also at the heart of the Big Data and Artificial intelligence evolution, with Azure and Power Platform, as well as a growing Dynamics 365 business in enterprise CRM. These businesses will power the future of AI and automation and has a certain amount of recession resilience.

Apple is a luxury product that has ridden a decade of growth, and its continued growth is dependent on users buying the most expensive, semi-outdated devices based upon brand affinity and/or subscribing to a set of crowded consumer services where people aren’t clamoring for anything new.

Difference 3: Microsoft has already made the services pivot, while Apple is still midstream in its transformation.

With over a billion subscribers to 365, combined with a robust and quickly-growing infrastructure-as-a-service business (Azure) that is the only company in the space taking market share from Amazon.com (NAS:AMZN) , Microsoft is well beyond the pivot point.

Meanwhile, Apple is still testing the waters with Arcade, TV Plus, Apple Credit Card, and Music Services, all of which have significant competitors (Spotify (NYS:SPOT) , Netflix (NAS:NFLX) , Amazon) that are much further along in terms of product and market growth.

Difference 4: Microsoft’s CEO is a dynamic risk-taker while Apple’s CEO is playing it safe.

Satya Nadella started changing things almost the moment he walked into the role. This was especially true with the shift from a software licensing business to a cloud company. Tim Cook has been slow and methodical, streamlining operations, enhancing margins through pricing adjustments, and rolling out iterative and copycat products that Apple knows it can sell.

These products, as Tuesday’s announcements showed, are boring, and certainly neither innovative nor transformative.

Here are my quick takes on the five new products and services Apple unveiled:

• Apple Arcade is a subscription gaming service on iOS that offers as many questions as answers. Most high-end gamers are looking for much more immersive gaming experiences, while recreational gamers are often drawn to ad-supported free games.

• Apple TV+ is another Netflix-type of service that also is competing with Disney (NYS:DIS) , Hulu, Amazon, and a plethora of sports, movie and other content services.

Read: Apple’s streaming service is cheap, but how does it stack up against Amazon, Netflix and Disney?

• The seventh-generation iPad offers a small increase in screen size, updated processor and a very rudimentary multitask capability. It’s a little less expensive than Microsoft’s Surface, but not even on the same plane for productivity.

• The fifth-generation Apple Watch was the best product of the day and potentially the strongest category, together with AirPods, for Apple going forward.

•  iPhone 11 and iPhone 11 Pro have small improvements to camera, processing, and battery life. Will anyone with an iPhone 8 or newer really be clamoring to get one? Sure, it will sell, but I find it hard to believe it will drive fourth-quarter business the way it has in the past. I think the 12 with 5G is Apple’s best shot to get the iPhone back on track.

While the race to be the biggest company by stock-market value is close today, Apple will need something disruptive in the coming four quarters to catch up in the long run. If Tuesday’s launch is an indication of what to expect from Cupertino, Microsoft looks the part of a company fit to stay on top.