The $1.7 trillion question that did NOT come up during Trump-Biden presidential debate

This issue affects millions of Americans, and has become especially prescient during the COVID-19 pandemic 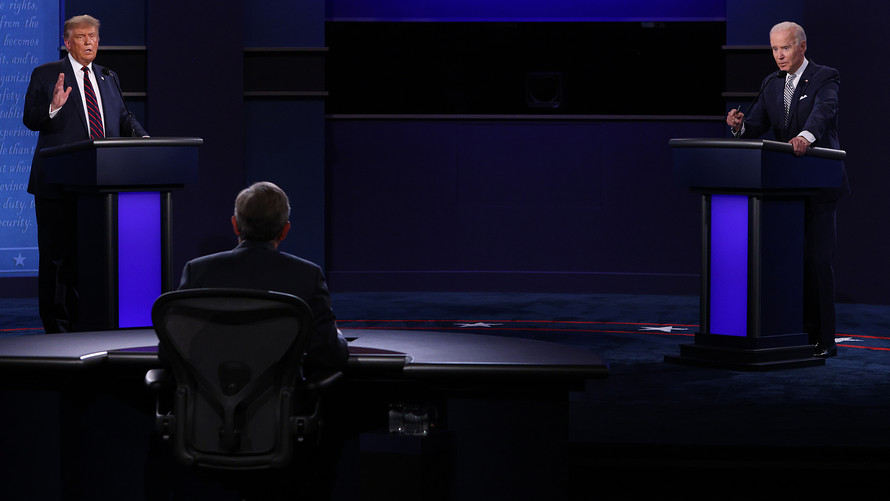 One issue was notably absent from the acrimonious and frequently chaotic first presidential debate.

President Trump and his opponent, the Democratic nominee for U.S. president, Joe Biden, did not mention issue of college students and student debt, which currently stands at $1.7 trillion. That’s the same amount of money that was lost in two days when the stock market plummeted in February due to concerns about the coronavirus.

It’s also the same amount of money that the Federal Reserve Bank of New York in May estimated that, contrary to statements from the White House, Americans paid throughout the two years of the U.S.-China trade war. The billions in tariffs hurled back and forth between Washington and Beijing have reduced the market value of U.S.-listed companies by $1.7 trillion, it said.

That $1.7 trillion figure is also the amount the world’s 500 richest individuals added to their wealth last year, according to the Bloomberg Index, increasing their collective net worth by 25% to $5.9 trillion. The richest 0.1% in the world control a bigger share of global wealth more than at any time since the Wall Street Crash of 1929, it added.

Related: How a President Biden or a President Trump could affect the student-debt crisis and college affordability

And $1.7 trillion is the amount of money that Americans owe in student debt. On stage at Case Western Reserve University in Cleveland, Trump charged that Biden would “close down the whole country” to stop the spread of the coronavirus and said that his administration had built the “greatest economy in history.” The two candidates sparred in a rowdy, 90-minute exchange.

The first debate came as the number of confirmed cases of the coronavirus that causes COVID-19 rose to 33.6 million, a day after the global death toll reached 1 million. The U.S. continues to lead in case numbers and fatalities, with 7.2 million confirmed cases and more than 206,000 deaths, a fifth of the global total. India has fewer cases than the U.S. (6,225,763).

Student activists have campaigned for colleges to reduce their fees as the coronavirus pandemic sent students and colleges scrambling to find a way to continue their education without the trappings of classrooms, office hours, a university community, while avoiding the kinds of outbreaks that have happened at some campuses across the country.

Borrower advocates say they’re braced for the subject to be raised in future debates. Student Debt Crisis, a non-profit organization dedicated to reforming student debt and higher-education loan policies, said Wednesday: “There was not a single question about the $1.7 trillion student-debt crisis. That is unacceptable and we need to hear from both candidates about their plans.”

Student debt impedes a person’s ability to save for retirement, and purchasing a home. “On top of that, the COVID-19 pandemic has magnified the student debt crisis. Lost wages and medical costs will continue to impact families for weeks, months, and years to come. Adding the persistent burden of student debt is a recipe for an economic disaster,” the organization said.

“Students loans are now the second largest slice of household debt after mortgages, bigger than credit-card debt,” according to the Brookings Institution, a Washington, D.C.-based think tank. Approximately 45 million Americans or about 1 in 8 people have student loans, “so this is a potent issue among voters, particularly younger ones,” it added.

Biden has said that if elected he would make college tuition free for families earning $125,000 or less. He also vowed to immediately cancel $10,000 in student debt per borrower and to cancel federal undergraduate student debt for borrowers earning up to $125,000 as long as it was related to their education at a public college, a Historically Black College or university or Minority Serving Institution.

Trump hasn’t said exactly what he would do address student debt and college affordability, but his record as president offers some hints. Trump’s Secretary of Education, Betsy DeVos, has rolled back Obama-era efforts to regulate for-profit colleges, which accused of luring borrowers into taking on debt for degrees worth little in the labor market. The Trump administration also extended the pause on student loan payments and collections that Congress implemented through the CARES Act, the coronavirus stimulus bill, through Dec. 31.

Calls for cancelling student debt amid battles over the debt held by students who were defrauded by their colleges have shown voters that there are ways to legally discharge borrowers’ federal student loans. In addition, research from a variety of scholars has highlighted the disproportionate impact that America’s debt-financed higher education system has on Black students and families.

What’s more, the Brookings Institution also said that low-income households are falling further behind on student debt more so than other people in recent months due to loss of income during the coronavirus pandemic. “Roughly one-fourth of households (24%) had student loans with an average balance of $30,118,” the think tank’s researchers said.

They added: “The proportion of individuals who reported that their households were behind on student loan payments as a result of COVID-19 was over three times as large among those who lost their job or income due to COVID-19 (26%) when compared to those that did not lose their job due or income to COVID-19 (8%).”

(Jillian Berman contributed to this story.)