The balance of power remains with bulls

Let us confess: We're primarily technical analysts. Not that we believe charts forecast the future. That would be silly. Stock market charts reflect buying and selling by everyone -- smart money and dumb money, insiders and amateurs, investors and day-traders.

Charts reflect mass actions and mass emotions. Out of this chaos, at times, patterns emerge that allow us to say that bulls are in control or the bears are gaining power.

Such understanding shifts the odds in our favor, and we lay our cash on such odds. We protect ourselves from mistakes by using strict money management rules. 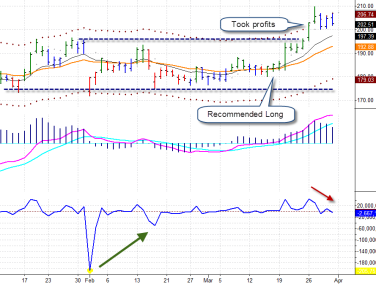 Amazon.com, Inc. /zigman2/quotes/210331248/composite AMZN +0.57% provides a good example. We recommended it two weeks ago in this story, becoming bullish because AMZN had reached its lower channel line on the weekly charts, indicating that an extreme level of bearishness has been reached, and the pendulum was ready to swing up.

The support line on the dailies was holding well, while the Force Index in the lower pane showed a bullish divergence -- bears were becoming weaker. AMZN duly rallied, and as it approached its upper channel line on the daily charts, indicating an extreme of optimism, we began to take profits.

This is what serious technical analysis is about -- reading crowd behavior on the charts, getting in gear with the dominant group, and hopping off when a trend reaches an extreme of optimism. The trend may well go higher, but there is no need to be greedy. Better to go looking for similar patterns on other charts. 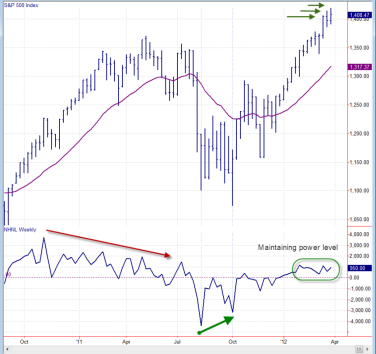 The S&P 500 keeps rising to new highs week after week. Four weeks ago it staged a brief shakeout, and there was another brief shakeout six weeks prior to that.

Such pauses work off overbought conditions and permit new advances. What's so bearish about a long series of new highs?

Many people become bearish after they miss a rally, but that is not a realistic foundation for a market view.

Our favorite leading indicator of the stock market is the New High - New Low Index (NH-NL). It helps anticipate market turns by measuring and comparing the number of new highs and new lows -- the strongest and the weakest stocks on the exchange.

At this time, the weekly NH-NL is maintaining a steady power level. Important reversals tend to be preceded by divergences, such as those marked by diagonal red and green arrows. Nothing similar is seen at the right edge of this chart.

We're not out-and-out bulls, with steam coming out of our ears. There are plenty of minor signs of weakness, and the uptrend is no longer young. We will continue to experience shakeouts, as well as some serious breaks. What we say is that the balance of power is on the side of the bulls. It pays to trade with the major trend, swim with the current.

As the uptrend matures, our trading becomes shorter-term. Among the stocks we will be watching and possibly buying this week, on a purely technical basis, will be APKT, BBG, and UPL. This will be bottom-fishing in an uptrend, angling for another upturn, which worked out so beautifully with AMZN, although technical signs here are not as strong as they were in that stock.

Alexander Elder maintains a partial position in AMZN, holds UPL and is looking to go long one or more stocks mentioned.