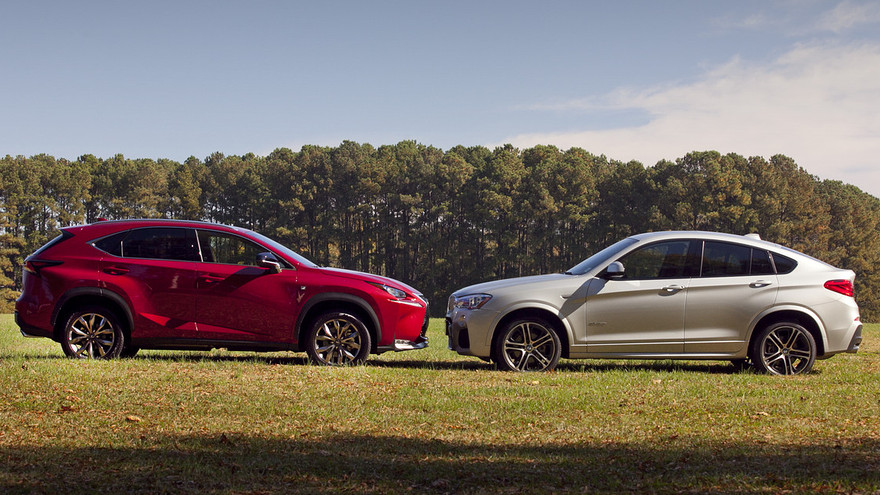 The megatrends are plain enough: Increasing urbanization and traffic density select for smaller personal-vehicle size, globally, over time. Also putting the potential squeeze on vehicle dimensions, big picture, are spiraling carbon-emission standards due to the relationship between vehicles’ weight and the energy required to move them.

And yet there is no such contraction in consumer expectations for a safe, comfortable, versatile five-passenger vehicle with optional all-wheel drive and reasonable operation costs, across a range of prices. There are only so many ways for product planners to respond to that brief.

So the explosive growth in a vehicle type known as the compact crossover SUV. These little guys offer the raised seating position (H point) consumers love, with higher sightlines and vehicle ground clearance, with the stability and versatility of a car-based wagon (mostly). Some estimates have the segment growing 20% by 2021. At that rate Americans will be issued one at birth.

Fresh off the boat is our other test car: the Lexus NX200t F Sport AWD /zigman2/quotes/203803129/delayed JP:7203 +0.61% , a highly evolved version of the Toyota RAV4, powered by a hardworking turbo four and smothered with as much Lexus lather as can be raised. Although they look different, the BMW X4 xDrive35i and Lexus NX200t F Sport AWD are two flavors of the same sweet spot in the market.

BMW X4 xDrive35i: beauty is on the inside

BMW /zigman2/quotes/209548467/delayed DE:BMW +0.11%  is coloring in market white space like a crazed preschooler. The German giant, fully ensconced in North America at its sheds in Spartanburg, S.C., offers an array of like-size cars that vary only subtly in metrics like overall height, H point—H for “hip,” or seating elevation above the ground—as well as the character of the roofline silhouette: sedan, coupe, wagon, even “Gran Coupe,” milady.

Consider BMW’s SUV-ish specimens: X1, X3, X4, X5, X6. They all look sort of different, but they all sort of taste the same. Like pasta.

The X4—a “sport-activity coupe,” according to BMW—is a nut-and-bolt replicant of the X3 “sport-activity vehicle,” except the X4 is a fastback, with a roof 1.5 inches lower (63.9 inches) than the X3s, landing with coupe-y authority at a stubby aero deck. SAC, really? OK, you’re the engineer.

I think, as an aesthetic matter, the X4 comes dangerously close to being adorable, a kind of shaved-tail, neonatal quality that happens when designers aim the shrink ray at a successful larger vehicle, in this case BMW’s midsize X6. The exterior has a lot going on at the front end, resulting in the collision of the fog-light insets and the bumper-breathing lower grille. Also, the X4 has a couple of swage lines along the fuselage with an unfortunate Mercedes-ness to them. 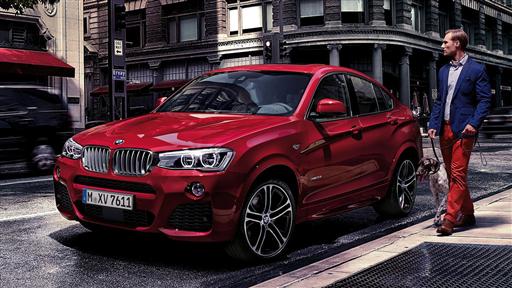 BMW X4: Standing out in the crowd

The why of the X4 is elusive until you climb into the driver’s seat, where a display of BMW’s handsome, rational interior experience awaits you, lined in lustrous aluminum interior trim, nice wood veneers, French stitched-leather dash and door gussets and the best switchgear in the business.

The X4 offers the choice of the company’s exemplary 2.0-liter, 240-hp turbocharged four cylinder (xDrive28i); or the suave, sonorous, rpm-blissed turbo 3.0-liter in-line motor, putting out 300 hp and 300 pound-feet of torque as low as 1,200 rpm. Both engines are paired with an eight-speed automatic transmission. According to the company, the 2.0-liter reaches 60 mph in 6 seconds, while the 3.0-liter gets there in 5.2 seconds.

The X4 xDrive35i comes standard with BMW’s adroit, rear-biased all-wheel drive, with the Dynamic Stability Control baked into the software, liaising with the electric-assisted dynamic steering and smart brakes. Buyers who want more feel in handling can get dynamic suspension control.

It all starts to add up. A fully kitted example, with the M Line’s glorious Melbourne red paint, 20-inch wheels and ivory hides, priced out at $62,250 through the consumer website.

I’m not persuaded by the X4 over its siblings. The X3’s packaging is more practical, the roofline less compromised (sight lines, rear passenger ingress), and the X3 is entertaining enough to drive. The X4 is impossible not to like, taking everything good about the X3 xDrive35i and giving it a tick better center of gravity. But the why refuses to stay in focus.

Making a more aerodynamic hedgehog does not necessarily result in a better hedgehog.

If BMW’s hyper-niche X4 fastback asks the question: Why? The Lexus NX2300t prompts the question: What took so long? The midsize Lexus RX has led U.S. crossover sales practically since Toyota’s luxury division introduced it, in 1998. A baby brother seems late arriving.

Now that it is here, the actual car—built on the foundations of the Toyota RAV4—is a challenging bit of drafting, not everyone’s cup of hemlock. Indeed, for some it may require full-on grief counseling. Nearly the entire nose of the NX200t ($34,480) is taken up with the deeply graphic “spindle” grille, limned in brightwork, set between the dazzling LED light spears and narrow, remorseless headlamps. This mug is even more scornful and borderline than the one hung on the new IS and GS sedan. The F Sport version we had (out the door at $42,710) was positively Saturnine. And yet it lands right on the feisty little crossover, and I have to marvel at the fabrication required to make that metal mesh grille inset. The styling is a win.

Behind that grille is another bit of science fiction: a 2.0-liter, port- and direct-injected, twin-scroll turbocharged in-line four-cylinder engine, a first for a Lexus. The intercooler plumbing, turbocharger and exhaust manifold are integrated into the engine’s cast-aluminum head, primarily to reduce turbo lag. Also, thanks to its broad authority over valve timing, the engine can switch between fuel sipping, low-power Atkinson-cycle combustion (like the engine in the Prius) to the more power-rich Otto-cycle, as demand requires. 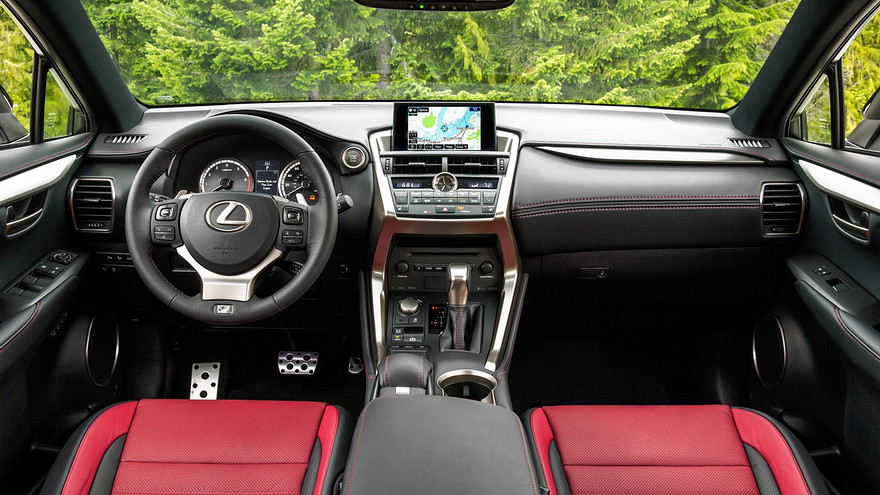 Lexus
If you get all sassy with your bad self, you will order the Lexus NX200t F Sport package, which includes a harder-accelerating final gear ratio; as well as summer tires, sport-tuned suspension; paddle shifters and swank leather seating with contrasting stitching.

The result is an engine that doesn’t really have any weakness, from low rpm to its trilling, counterbalanced redline. The 2.0 produces 235 hp from 4,800-5,600 rpm, and hits peak torque—a goodly 258 lb-ft—from as low as 1,650 to 4,000 rpm. That’s pumped through Lexus’s six-speed automatic, as slippery as a bucket of squid, out to a limited-slip front differential and half shafts.

You can up-armor your NX200t with Lexus’s clever all-wheel drive system that allows as much as 50% of drive to be shipped rearward in the event of a loss of traction at the front wheels. The Dynamic Torque Control AWD, as you might guess, modulates yaw rates with brake-based torque vectoring.

If you get all sassy with your bad self, you will order the F Sport package, which includes a harder-accelerating final gear ratio (4.11 vs. 3.88); as well as summer tires, sport-tuned suspension; paddle shifters and very swank leather seating with contrasting stitching. The F Sport package also includes an audio system that will pipe in aurally augmented engine sounds through the speakers. This raises metaphysical questions beyond the scope of our inquiry.

Lexus estimates the NX200t AWD can bundle itself to 60 mph in 7 seconds, which is very respectable energy management for a 2-ton vehicle. The other side of that coin is fuel economy: The NX200t AWD gets commendable fuel economy: 21/28/24 mpg, city/highway/combined, says the EPA.

The NX comes in three flavors: a non-turbo’ed 2.0-liter (not available in the U.S.); the turbo’ed 200t; and the NX300h, a gas-electric hybrid with a 67-hp electric motor between the wheels for dual-mode AWD.

In this segment it will need all the traction it can get.