The chase for performance is on after the results in Italy 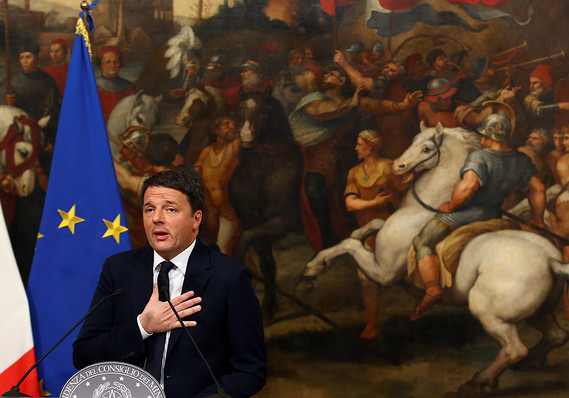 Italians overwhelmingly rejected Prime Minister Matteo Renzi's proposed constitutional reform on Sunday, and as a result, Renzi is resigning. Defeat of the reform proposal is a victory for the opposition Five Star Movement (M5S). Polls show M5S has gained popularity and is well positioned if a new election is called. The most important point for investors is that M5S wants Italy to get out of E.U. budget restrictions and abandon euro. Before the vote, the smart money was moving into gold. Now that the results are in, where is it heading?

As the euro started to move up, stocks followed. At the same time, gold started going down.

After Brexit and Trump, stocks went up and gold went down. Now investors are conditioned to do the same thing after the Italian referendum. This is backward looking. Typically, money is made by looking forward and not backward. However, due to the performance chase by money managers, driving while looking in the rear-view mirror instead of through the front windshield is likely to work until the year end.

After the Trump election, the Adaptive ZYX Global Allocation Model reduced cash holdings to 15% to 25% and called for deploying the cash primarily in U. S. stocks.

The plan is to continue to hold existing stock positions and continue to add special situations especially on pullbacks. An attractive area to add is energy. Please see “After OPEC decision, 3 oil stocks to invest in and 2 to trade“.

After the Trump election, our long gold position was sold and large short positions in precious metals, the euro and yen were maintained. The short positions were hedged on Friday with the exception of a small inverse-euro position with inverse euro ETF (PSE:EUO)  . We also provided intelligence, not an official buy signal on gold.

There are cross currents in gold, especially from India and China. The currents from India and China are negative for gold. In spite of the first reaction, Italian development is positive for gold. Gold is also technically oversold. If a small quantity of gold was bought on Friday, the plan is to hold it but put stops under $1143. If the silver ETF (PSE:SLV)  , gold miner ETF (PSE:GDX)  , junior miner ETF (PSE:GDXJ)   or leveraged miner ETF (PSE:NUGT)   were bought, it is prudent to reduce position size and consider putting close stops on the rest. The plan is to maintain the hedges, at least temporarily on short precious metal, euro and yen positions.

Please see “Potential gold-import ban by India could be biggest bombshell since Nixon.”