X
Tweet
Share this bulletin
Get news bulletins by email
Bulletin Could we get a quick coronavirus vaccine? Here's what that would involve »
Investor Alert

The cool and unconventional secret to affordable housing near San Francisco

Sausalito’s docks are home to about 500 colorful houseboats 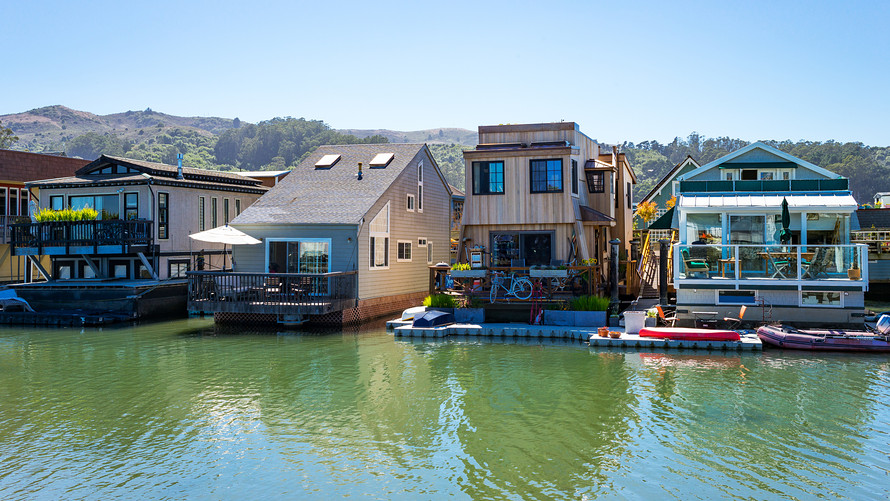 The cost of housing in the San Francisco Bay Area is astronomically high compared with other U.S. cities, even other major metropolitan areas. In a recent comparison of 75 cities, San Francisco was the most expensive city in the country, with its neighbors San Jose and Oakland in the top five along with New York City and Boston.

Living costs in San Francisco are 25% higher than the national average and last year, when the government announced that a Bay Area family earning a household income of $117,000 could be considered low income, there was a national uproar.

Despite the prohibitive cost of housing, the city has continued to draw new residents just as it always has, and not just for the tech industry, either. People are drawn by the city’s history, architecture, dining scene, museums, mild weather, outdoor lifestyle, the melting pot of culture — the list goes on and on.

See: Nearly half of the U.S.’s homeless people live in one state: California

But not everyone can shell out a cool $1.3 million for a single-family home (that’s the median listing price for just the average home — not a luxury residence). What is a would-be San Franciscan without a million dollars in the bank to do?

Sausalito, located on a peninsula north of the city, is just a stone’s throw away — either a 30-minute drive that crosses the Golden Gate Bridge or a 30-minute ferry ride. And Sausalito is home to one of the country’s unique communities: the Sausalito Floating Homes. Established in the 1960s, the docks are home to about 500 colorful houseboats inhabited by those in search of less conventional living arrangements.

And the cost to live there? Some homes come in around the same median cost as its San Francisco counterparts, but some are listed in the low $600s and $800s, making it a more affordable Bay Area option.

“It became clear to me pretty quickly that this was a very diverse community, with homes from $5 million dollars to just a few hundred thousand,” says Megan Dixon, an international investigations attorney and owner of the boat Brown Sugar. “You have a little bit of everything — doctors, lawyers, teachers, artists — all sorts of people want to live here. Obviously, it has to do with the water.”

Residents of the famed floating homes neighborhoods say that while they could have chosen anywhere to live, it isn’t only that the homes are so unique, it’s the people that make this place special.

“It’s a close-knit community,” says Larry Clinton, who has lived in his floating home for 39 years and is the editor of the community site,  Floating Homes .

“People look out for each other here. You see everyone coming and going on the docks every day. Most people move here to get away from it all and they respect each other’s privacy.”

Floating retreats of the 1880s

The community began in the 1880s, when well-to-do San Franciscans built floating retreats they called ‘arks’ they parked in Richardson Bay and used for endless summer swimming and boating parties. Eventually, the arks were anchored to boardwalks, many of them becoming permanent residences after the earthquake and fire of 1906.

Richardson Bay’s waterfront was home to Marinship Corporation during WWII, where 20,000 workers made Liberty ships — huge, flat cargo transport ships. When the war ended, so did operations at the factory, and virtually overnight the site was abandoned, leaving tons of wood, metal and scrap behind.

A shipyard worker named Donlon Arques bought the land and materials, offering them to soldiers returning from the war along with other eccentric people looking for cheap housing.

You might like: These are the best places to go if you want to live the #VanLife

In the following decades, anyone could take over an abandoned Liberty boat and build on it, using salvaged materials. Builders fell into two camps: those that created architecturally unique homes and those that were essentially squatters.

The freewheeling spirit of the 1960s attracting artists and musicians and hippies, with the community centered around a dilapidated paddle wheel steamer called the Charles Van Damme that was used for parties and gatherings. While many of the floating homes became attached to docks permanently, others, called ‘anchor out’ dwellers floated out around the bay — something that is still in practice today.

Each of the floating homes is different. Some are just 300 square-feet, while the gargantuan floating mansion Dragon Boat is a whopping 4,000 square feet. One houseboat is a replica of the Taj Mahal; another, from the 1970s that is no longer in existence was painted to look like Donald Duck.

Some of the floating homes are repurposed machines: The Fairy Tale was once a WWII barrage balloon carrier and The Train Wreck was once an 1889 railway car. Some are fully updated, like Dixon’s which had a 7-month remodel, while other floating homes like The Owl have been slowly added to and built up over the years.

About 70% of the homes are inhabited by their owners, while the other 30 percent are rented or available for vacation rentals. The Floating Homes Association has an annual tour that gives curious people a look inside, and guests are welcome to stroll the docks any time of year for a peek at the outside of the homes.

Just as eccentric as the homes themselves is the history of its residents. Shel Silverstein owned the Evil Eye, a converted WWII balloon barge; and his best friend Larry Moyer, a filmmaker, photographer and painter owned the Becky Thatcher. Over the years, the floating neighborhood has been home to author Anne Lamott, actor Rip Torn and other celebrities. Otis Redding famously wrote his hit song “(Sittin’ on) the Dock of the Bay” at Waldo Point in 1967.

A sense of community

Today, most of the residents of the floating homes residences are just regular folks who love living in unusual homes in a beautiful setting — one that’s not necessarily the norm in the Bay area. “It’s a very tranquil lifestyle with water views, beautiful sunsets and the wildlife,” says Clinton. “People who live here have a love of nature, especially a love of the water. People who move here figure out a way to not have to commute to work.”

“I visited and fell in love,” says Dixon. “It’s much more of a community than I’ve ever experienced. I’ve lived in apartment buildings for decades and never met some of the neighbors, and here I’d say that at least half of my closest friends in the world live right next door.”

Community is at the heart of Sausalito’s floating homes — despite every home being unique, and despite any economic differences. “During any sort of emergency, it’s an unwritten rule, everyone emerges from the docks and pitches in,” says Clinton. “It’s astonishing. That sense of community came as a big surprise to me.”

For those who seek the community of a small town, unusual digs, access to the water and the natural habitat, and the backdrop of one of the most exciting cities in the world, it’s no doubt Sausalito’s Floating Houses are the true hidden gem of the San Francisco Bay Area.