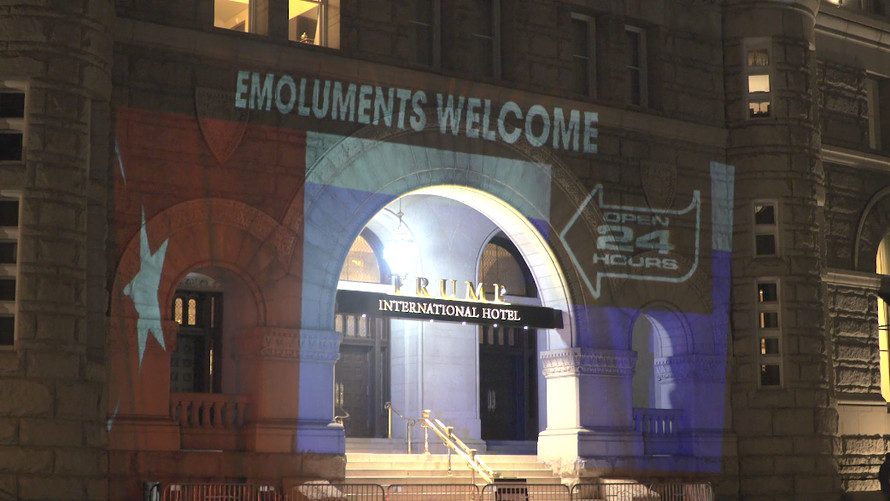 Robin Bell
Artist and activist Robin Bell projected the words "Emoluments Welcome" on the facade of the Trump International Hotel in Washington in May 2017.

Conservatives, we are constantly told, believe in strict adherence to the Constitution based primarily on the text and secondarily on the views of the Founding Fathers, who wrote and breathed life into our founding document. If conservatives really were “originalists,” they would be the first to say that Donald Trump is exactly the kind of president who ought to be impeached.

Unique among presidents, Trump has divided loyalties. He has entangled his business interests with his official duties, creating the impression, if not the reality, that his own financial interest — not his duty as president — guides his thoughts and actions.

The Founding Fathers, savvy students of history and human nature, were highly attuned to the risks of public corruption — actual or perceived — and inserted language into the Articles of Confederation and later into the Constitution to guard against such human frailties. They wanted to make sure that anyone who held a public office would serve only one master: the American people.

A farewell to kings

For the Founders, public corruption wasn’t just a theoretical danger. They viewed it as the primary threat to their independence. Living in a small, fledgling country, the Americans feared that the European powers would seize control of the American democracy by flattering and bribing our officials.

The kings and princes of Europe were masters of the art. The British king had corrupted Parliament by providing titles and sinecures, a major contributor to the split between the colonies and Britain. The true history of the 1670 Treaty of Dover had just been published, which revealed that King Louis XIV of France had bribed Charles II of England with a secret pension, a beautiful and beloved French mistress, and a promise of protection. In exchange, Charles had agreed to convert to Catholicism and to join Louis in his costly and fruitless war against the Dutch, his former ally.

During the Constitutional Convention , Gouverneur Morris (who is regarded as the chief architect of the presidency) argued that receiving such emoluments would justify impeachment of the president: Because the president would not have a lifetime office or income, Morris said, “he may be bribed by a greater interest to betray his trust; and no one would say that we ought to expose ourselves to the danger of seeing the first Magistrate in foreign pay, without being able to guard against it by displacing him.”

It seems the Founding Fathers had Donald Trump (or someone very like him) in mind when they wrote those clauses into the Constitution. They were concerned about our government officials being corrupted by foreign or domestic powers. Alexander Hamilton argued in Federalist Paper #73 that the domestic emoluments clause was designed to keep the president independent and incorruptible.

‘Appealing to his avarice’

“In the main,” Hamilton argued, “it will be found that a power over a man’s support is power over his will.”

With the emolument ban in place, “they can neither weaken his fortitude by operating on his necessities, nor corrupt his integrity by appealing to his avarice,” Hamilton wrote.

The key passage in the Constitution is Article I, Section 9: “No Title of Nobility shall be granted by the United States: And no Person holding any Office of Profit or Trust under them, shall, without the Consent of the Congress, accept of any present, Emolument, Office, or Title, of any kind whatever, from any King, Prince, or foreign State.”

The point of this clause is to prevent any foreign power from gaining influence over the U.S. government by providing gifts, titles, jobs or other benefits to its officials.

Article II, Section 1 specifically limits the president and does not allow Congress to approve exceptions: “The President shall, at stated Times, receive for his Services, a Compensation, which shall neither be encreased nor diminished during the Period for which he shall have been elected, and he shall not receive within that Period any other Emolument from the United States, or any of them.”