The IRS is sending $1,200 stimulus checks to dead people

More than 80 million Americans are expected to get their stimulus money this week, according to the Treasury Department 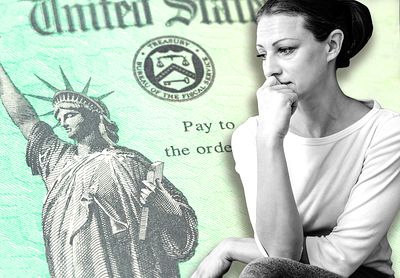 MarketWatch photo illustration/iStockphoto
Some of the $1,200 stimulus checks being sent out under the CARES Act are going to deceased people.

Many Americans are eagerly anticipating stimulus checks of up to $1,200 starting this week, but in a few cases the recipients won’t be celebrating — because they’re dead.

The IRS began distributing $290 billion in direct cash payments within the past week as part of a $2 trillion CARES Act stimulus bill, and anecdotes are already surfacing about the IRS issuing money to the deceased.

Rep. Thomas Massie, a Republican from Kentucky, said Wednesday a friend texted him to say his father, dead since 2018, had just received his $1,200 in stimulus money.

“Ok this is insane, but just the tip of the iceberg. This is a direct text to me from a friend. I called to confirm this actually just happened,” Massie wrote on Twitter /zigman2/quotes/203180645/composite TWTR +0.30% . The legislator became the target of bipartisan scorn late last month when he unsuccessfully asked for a roll-call vote on the stimulus bill. He noted his friend filed the father’s taxes for 2018.

In Florida, tax preparer Adam Markowitz has also seen examples among his clientele of the IRS sending stimulus money to dead people this week. (He declined to go into more specifics to protect his clients’ privacy.)

What’s more, it appears the survivors can keep the money, Markowitz and other tax experts told MarketWatch.

‘There is nothing that the IRS has that is preventing someone who is deceased from receiving this money.’

“There is nothing that the IRS has that is preventing someone who is deceased from receiving this money,” said Markowitz, an enrolled agent and vice president of Howard L Markowitz PA, CPA, based in Leesburg, Fla.

It’s important to remember some of the stimulus check guidelines to understand how such a twist of events can occur.

When the IRS determines eligibility and check amounts, it’s looking at the adjusted gross income on a household’s 2019 tax return. (Those are the returns being filed in the current tax season that ends July 15.)

If the IRS doesn’t yet have the 2019 return, it looks at the adjusted gross income on the 2018 tax return to determine the size of a household’s stimulus check.

“The IRS claims it is going to take the data from your most recent tax return that is available,” Markowitz said. “If a taxpayer filed jointly with a deceased spouse in 2018 and has not filed a 2019 tax return yet, the IRS likely has no safeguard in place to ensure that it won’t make that payment to someone who is no longer with us.”

About half of those checks were returned, the Inspector General report estimated, when reviewing a sample of 50 beneficiaries.

“People may have returned it, but they didn’t need to,” said Nina Olson, the former head of the Taxpayer Advocate Service, an internal IRS watchdog. The same goes for the $1,200 stimulus payments, as far as Olson sees it. The CARES Act stimulus bill contained no “clawback” provisions for stimulus checks sent to a dead person, meaning the agency can’t retrieve the money after it’s been handed out, she said. “Congress didn’t write around that this year,” she said.

The stimulus bill’s top goal was to provide quick cash to consumers and businesses, not complete precision, according to Nicole Kaeding, an economist and vice president of policy promotion at the National Taxpayers Union Foundation, a right-leaning tax think tank.

One key part of the stimulus bill is ‘that if the IRS sends you too much money, you do not need to pay it back.’

Nicole Kaeding, an economist and vice president of policy promotion at the National Taxpayers Union Foundation

“An important provision of the [Coronavirus Aid, Relief, and Economic Security] act, as it relates to these checks, is that if the IRS sends you too much money, you do not need to pay it back,” Kaeding said. “It is considered a clerical or math error on behalf of the IRS. And that’s important because they were trying to issue these checks quickly.”

The IRS knows “some people will receive money even when they didn’t qualify, but expedited processing was their No. 1 concern.”

The IRS and the Treasury Department did not immediately respond to requests for comment.

The real open question is “the opposite situation, where someone didn’t get enough,” Kaeding noted. That might happen, for example, if a woman had a child after she filed a 2018 tax return but hasn’t yet filed a 2019 return, and potentially missed out on $500 for the newborn.

“The IRS would not include the child in their check, however the child would qualify,” she said. Tax experts are waiting for Treasury Department guidance on what will happen in that type of scenario, Kaeding said.

Massie, in a statement to MarketWatch, said the speed of the CARES Act comes at a cost.

“The government is in such a rush to get the small business loans and the $1,200 checks out the door that many mistakes will be made, and fraud will be rampant,” he told MarketWatch. “The government is skipping the customary and necessary diligence that’s usually performed when transferring taxpayer money. Will these programs be sufficiently audited a year or two from now? I doubt it.”