Today’s economy is good! Almost as good as it was in 2014

The last time the economy was this strong, Trump thought it was terrible 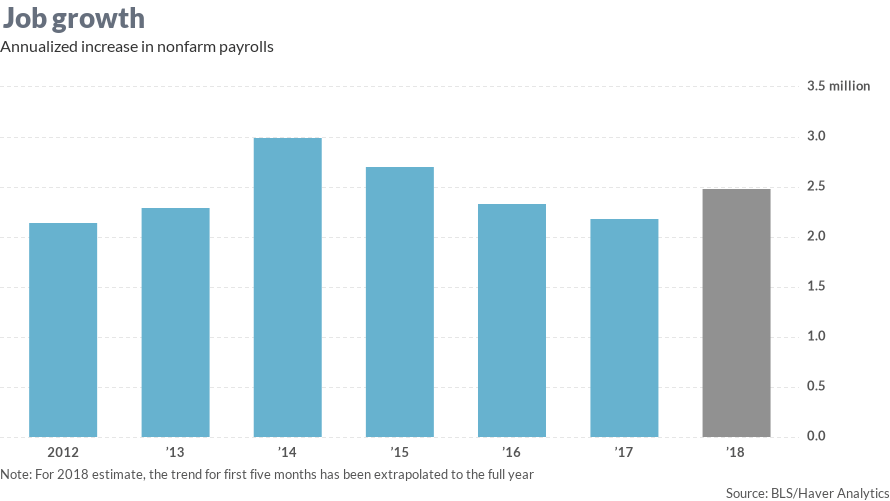 Today’s economy is strong, but not quite as strong as it was in 2014, when 3 million jobs were created.

The last time the U.S. economy was doing this well, Donald Trump was tweeting that it was terrible.

The economy is performing quite well right now, with gross domestic product growing at an estimated 4.5% annual rate in the second quarter (which ends a week from Saturday). However, such strong growth isn’t “unheard of,” as one of my correspondents recently claimed. The current U.S. economy is not — as the Tweeter-in-Chief claimed — “the greatest economy in the HISTORY of America.”

In fact, you only need to go back four years to 2014 to find an economy that was as good as (or better than) the one we are enjoying today. If real growth does reach 4.5% in the second quarter, that would be terrific. Just as terrific as the 4.6% growth in the second quarter of 2014, and almost as good as the 5.2% growth in the third quarter of 2014.

In the middle of 2014, Trump didn’t think the economy was the best ever. Instead, he was complaining that Obamacare and Obama’s “war on coal” were killing jobs and our economy. They weren’t, of course. The economy was OK, with the strongest job growth since 1999 and falling energy prices that put more purchasing power in the pocket of almost every American.

What follows is a comparison of some major indicators of the health of the economy for 2014 and for the past year. For monthly data, I’ve compared calendar 2014 with the last 12 months (generally June 2017 through May 2018). For quarterly data, I’ve plugged in the 4.5% estimate for second-quarter GDP from Macroeconomic Advisers, which is near the top of the range of estimates. 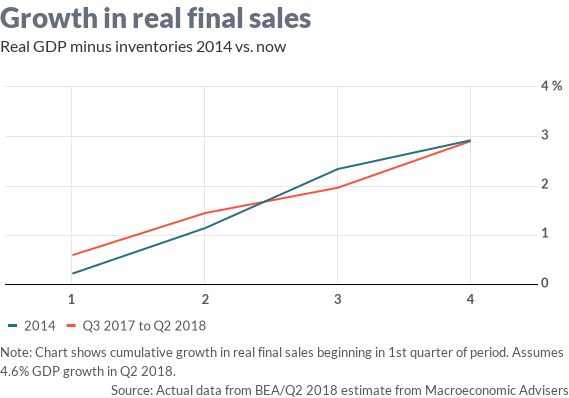 Measured by the most pertinent data in the GDP report (real final sales), today’s economy is very similar to the economy of 2014.

I’m using real final sales as the comparison instead of GDP. I’ve argued before that real final sales is a better gauge of the path of growth than GDP is, because it measures sales instead of production. Essentially, final sales is GDP minus the swings in inventory stockpiling and destocking that can make GDP figures so jumpy. In the short run, we want to focus on the strength of demand, not of supply.

By this yardstick, the economy of today (including the blockbuster growth of the second quarter) is nearly the same as the economy of 2014. The economy has been much stronger in the past, of course. For instance, real final sales averaged 4.4% for a whole decade in the 1960s, and more than 3% in the 1980s and 1990s.

Assessment: The economy of 2014 and the economy of today are about the same. If you compare GDP, today’s economy would have a slight edge, 3.2% to 2.7%. 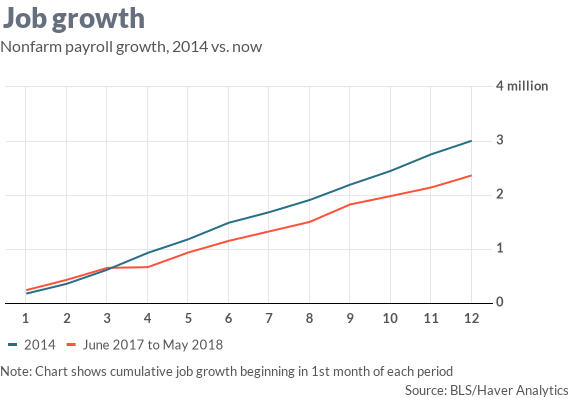 GDP and final sales are abstract concepts that may not mean much to most people. For the majority of people who aren’t economists, the best gauge of the economy’s strength is their paycheck.

To get a good paycheck, first you need a job.

Job growth has been very strong for the past seven years. Nearly 17 million jobs have been created since mid-2011. Only two periods in U.S. history saw more job growth: the late 1980s and the late 1990s (although the late 1970s come close).

The best year for job growth during this expansion was 2014, when 3 million jobs were added. By comparison, 2.36 million jobs have been created in the past 12 months. Good, not great.