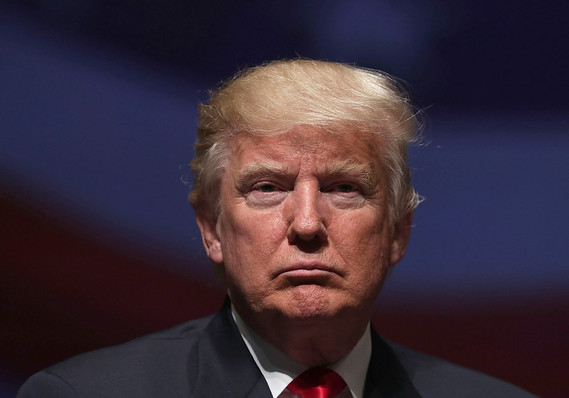 Rest in peace tax reform, we hardly knew ya.

The much awaited tax overhaul promised by President Donald Trump may be dead before it even got anywhere.

Shyam Rajan, a strategist at Bank of America Merrill Lynch, on Wednesday suggested that the interest rate market is increasingly signaling the possibility that tax reform will never come to fruition, contrasting with the general belief that Trump is facing a temporary setback in the wake of the failure to repeal and replace Obamacare.

“In our view, a big misunderstanding recently has been the message sent by the rates market vs. the common rhetoric thrown out to explain the decline in rates,” he said in a note to investors.

While most people are focused on a delay in tax reform to after Congress’ summer recess in August, “the rates market is pricing in the death of tax reform and dimming 2018 economic prospects,” said the strategist.

One big clue, according to Rajan, is the following chart of the London Interbank Offered Rate (Libor), a global benchmark for short-term loans, which shows market participants are projecting a steady decline in rates. 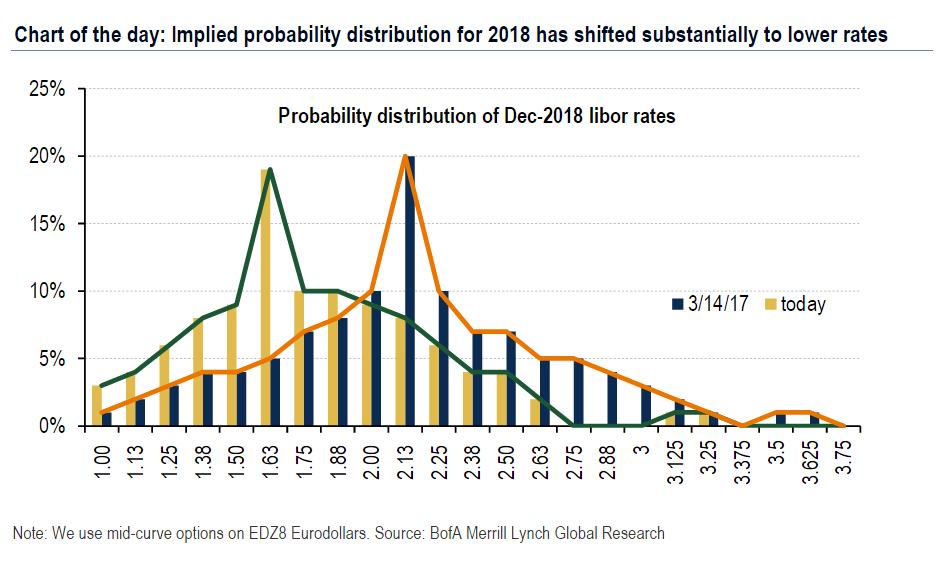 Put another way, the market is betting that the Federal Reserve’s rate-hike cycle is likely to come to an end in 2018 after two more increases this year.

The yield on the 10-year U.S. Treasury /zigman2/quotes/211347051/realtime BX:TMUBMUSD10Y 0.00%  spiked in the aftermath of Trump’s election on a belief that his pro-growth policies will lead to a rise in debt. It again surged in March when he released his budget proposal that notably boosted defense spending. Since then, however, the yield has corrected lower rather than pushing higher in line with the Fed’s tighter policy stance.

Indeed, Scott Minerd, global chief investment officer for Guggenheim Partners, earlier this week projected that the 10-year yield may sink as low as 1.50% by the summer as Trump faces difficulty implementing his economic-boosting measures on top of lingering geopolitical jitters.

He also noted that optimism over taxes has significantly waned since the election as S&P 500 /zigman2/quotes/210599714/realtime SPX -0.72%  companies that were most likely to benefit from Trump’s tax cuts have surrendered their recent gains. 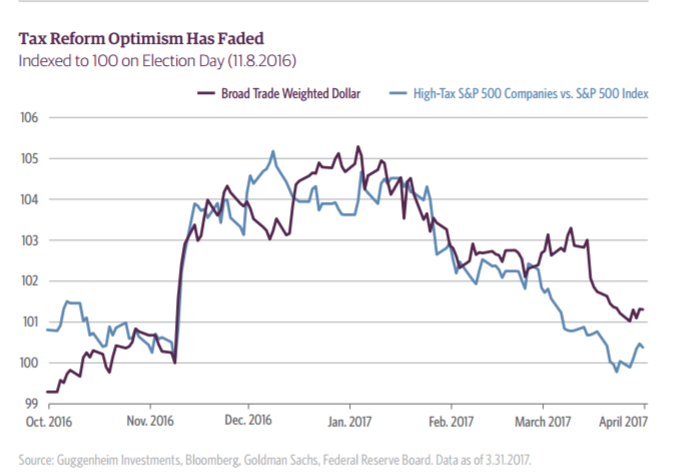 Meanwhile, Kevin Giddis, head of fixed-income capital markets at Raymond James, was less dramatic about how far yields could skid even though he likewise expressed concerns about the president taking his “eye of the ball.”

“A lot would have to go wrong for us to slide below 2%,” he told MarketWatch. “Increased geopolitical risk or some preemptive strike would likely be what it would take. Bad economics aren’t likely enough, although 2.15% could happen at any time.”

Worries about the U.S. economy have started to percolate after disappointing March jobs report and subdued retail and auto sales.

Giddis hasn’t decided whether the recent spate of weak data is temporary or the economy has hit a wall. The problem, in his view, is that Trump is distracted by Syria and North Korea and until he buckles down to focus on the domestic agenda, the risk of recession will slowly rise.

The 10-year yield is trading around 2.2% on Wednesday after falling below the key support level of 2.3% last week.

[This report was originally published on April 19.]