Bad news for parents: Remote learning is here to stay for many K-12 schools

‘Even when kids are home because of snow, they’ll still be learning,’ New York Mayor Bill de Blasio said this week 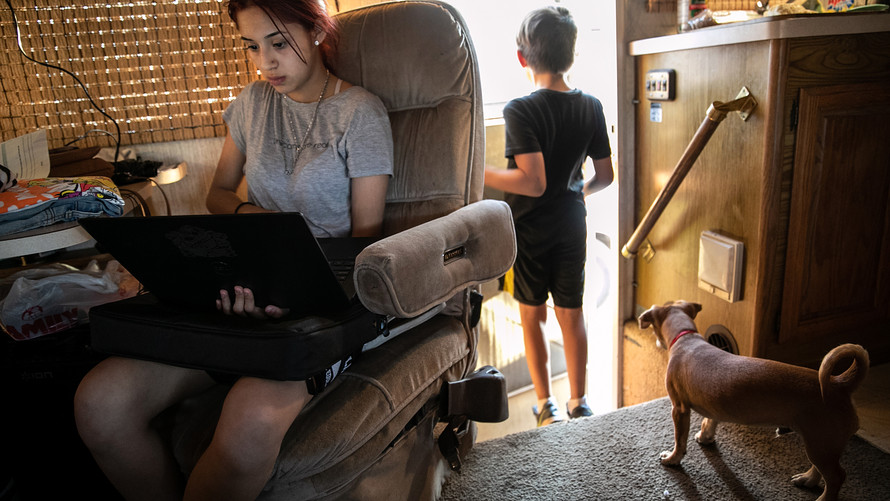 Getty Images
Roughly four in 10 participants in a survey of educators said too little money was a roadblock in providing quality instruction this school year.

A nasty nor’easter is barreling towards the East Coast and it could bring up to two feet of snow in some regions.

The snow will start Wednesday afternoon and continue overnight — all ingredients for a Thursday snow day to avoid snarled school buses on slushy, snowed-over roads.

Not this time, at least in places like New York City.

Due to the pandemic, the nation’s largest school system already incorporates remote schooling in its blend of in-person and distance learning, so Mayor Bill de Blasio said the show can go on, regardless of the snow.

“Someone said to me the other day they felt kind of forlorn about the fact that it ends the snow day as we knew it as kids, when we look forward to a day off, yes, it’s true that that’s now going to be a thing of the past, that even when kids are home because of snow, they’ll still be learning,” de Blasio told reporters on Tuesday.

“Even when kids are home because of snow, they’ll still be learning,” he added. “And I’m kind of sad for the kids on the one hand, on the other hand we got a lot of learning that needs to be done, a lot of catching up.”

While snow days may melt away in some places, a new study suggests remote schooling will stick around after the pandemic.

Roughly 20% of public school district superintendents and charter school leaders told RAND Corporation researchers they are planning to continue a fully online schooling option after the pandemic, or are at least considering the option for students and families who want the choice.

10% of the more than 300 survey participants say they’ll continue, or consider continuing, a hybrid model that mixes in-person and online instruction.

Before some parents see red at the prospect of more virtual schooling in a post-pandemic world, here’s one important caveat to the survey findings: none of the educators wanted to require virtual schooling, said Heather Schwartz, RAND’s program director of pre-K through 12 education systems.

“We didn’t read the words ‘mandate for all students’” in the replies.

“We didn’t read the words ‘mandate for all students’” in the replies, she said. Instead, the educators are considering keeping the virtual schooling option in the mix as a nod to some parents and students who are asking for the choice, Schwartz said.

The end result may be an online-only school, just like a district might offer a vocational school option next to a standard school option, she added.

Nevertheless, the number of districts that want to keep virtual schooling in the mix surprised Schwartz, who said increasingly prevalent online schooling raises some “red flags.” Research ahead of COVID-19 suggested students in online-only instruction had weaker grasps of the basics like reading, writing and arithmetic compared to students who physically attended school, Schwartz said.

“We really need to develop and keep pushing the quality of online instruction. Otherwise, we can expect students in virtual school to under-perform compared to students in traditional public schools,” she told MarketWatch.

At least this fall, wealthier households appeared more inclined to send their children back to in-person school; that was possibly because wealthier parents had more confidence their well-funded districts could safely handle in-person school during a pandemic, one researcher theorized.

After the coronavirus upended the spring semester, the fall return to school was a mix of remote learning, hybrid and in-person learning. The district’s location usually dictated which model was used, with most rural school systems returning to in-person instruction and most urban districts staying remote as suburban district were split.

As cases surged in the late fall — showing no signs of abating — some districts swiveled back to remote models for the near future, like in Manchester, N.H . or some New Jersey suburbs.

The real incoming disruption is a lack of money for staffing, surveyed educators said.

The real looming disruption, according to the educators polled by RAND, is an upcoming lack of money to pay staff, including teachers, substitute teachers and non-instructional staff such as bus drivers and cafeteria workers.

“A storm is coming when [the] state government realizes how empty its coffers are,” one unidentified charter school CEO told RAND. “We won’t be able to pay our staff or keep the same staffing levels without significant support.”

Roughly four in 10 survey participants said too little money was a roadblock in providing quality instruction this school year. (Approximately 60% of the educators said addressing students’ social and emotional needs was the greatest need, a concern that held true across poorer and richer districts.)

State and local funding has been a roadblock itself as Congressional leaders keep trying to strike a deal on a year-end COVID-19 relief package.

The cracks are already showing in school systems across the country.

Between February and August, the public sector shed 1.1 million jobs, according to the Center on Budget and Policy Priorities , a left-leaning think tank. Almost two-thirds (59%) of the cuts came in education, and 462,000 of those lost education jobs were within the K-12 school system.