After a sideways trading range, there are now two longer-term buy signals 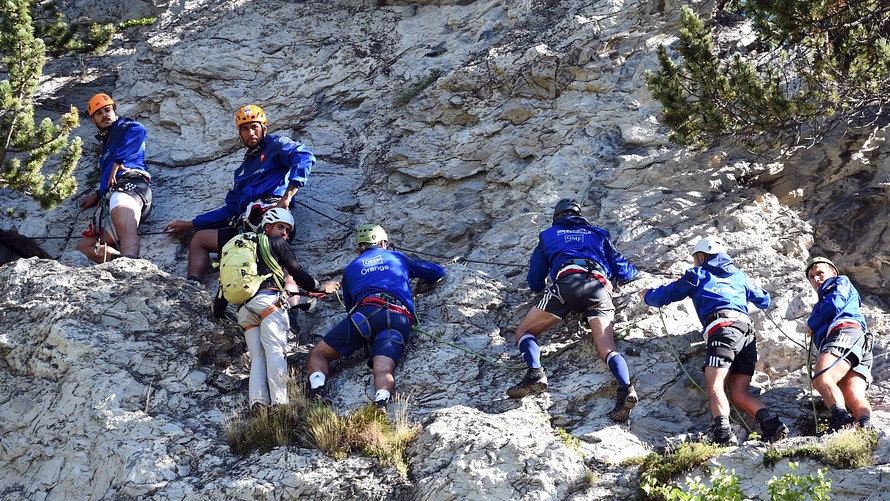 The S&P 500 index had remained in a fairly tight range ever since breaking out over resistance at 3,185 in mid-July — until Monday. It looks like it’s finally trying for another upside breakout.

This recent trading range has had the effect of reducing realized volatility (more about that later). Now that resistance at 3,280 (the July highs) has been overcome, the S&P (S&P:SPX)   can set its sights on resistance at 3,330 (the top of the massive Feb. 24 gap down) and at 3,395, the all-time high. 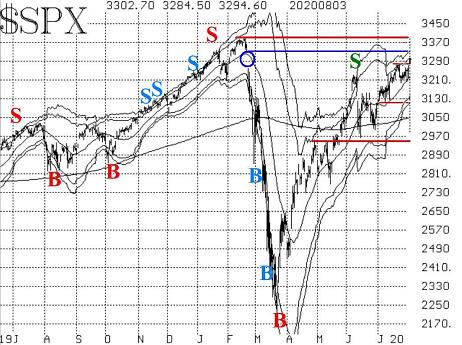 The “modified Bollinger Band” (mBB) sell signal remains in place. It is quite an old signal, but the stock market has not moved to either +/-4σ Band, so it is still in effect. With realized volatility having shrunk, the Bands are contracting toward the 20-day moving average, so maybe a resolution will be forthcoming soon.

Equity-only put-call ratios continue to make new relative lows. The standard ratio is chipping away at those January 2004 numbers, and is thus the most overbought it’s been in 16 1/2 years. Meanwhile, the weighted ratio is now down to the lows of last January on its chart. As overbought as these are, they are not yet on sell signals. Sell signals will occur when the averages roll over and begin to trend higher.

New highs have remained comfortably ahead of new lows, although that is largely due to the fact that there are almost no stocks making new lows.

Volatility continues to present an interesting picture. As noted earlier, realized volatility is dropping as the market trades in a tight, sideways range. That has pushed the S&P’s 20-day historical volatility down to 13%. That is much lower than VIX (845:VIX) . It also brings up the notion that if it were to fall to 8%, that would be an “official” overbought sign and would precede a sell signal by one of our systems (if the S&P’s 20-day historical volatility falls to 8% or lower, then sell the market when it later rises above 10%).

It might not play out that way this time, but if historical volatility falls below 10%, we will not become complacent, that’s for sure.

Implied volatility has fallen, too — just not as fast. Even so, VIX is below its 200-day moving average, and now its 20-day moving average has crossed below the 200-day as well (orange circle in accompanying chart). This is an official intermediate-term buy signal for the stock market. The two most recent such signals were in October 2019 and February 2019 — both good times to buy stocks. The most “famous” such signal was in March 2009. 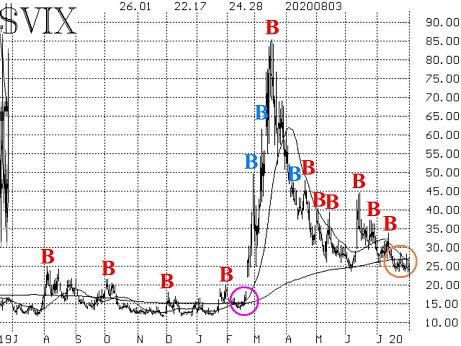 In the short term, the VIX “spike peak” buy signal of July 14 remains in place. It will continue to do so unless VIX begins to “spike” higher again (and if it did, that might even cancel out the above intermediate-term signal). But for now, the VIX chart is bullish for stocks both in the short- and intermediate-terms.

The construct of volatility derivatives is modestly bullish, as the VIX futures continue to trade with large premiums to VIX. This is especially true of the October VIX futures, which are elevated because of the election and perhaps seasonal stock market concerns.

In any case, October futures are trading with a premium of nearly 8 points to VIX as of this writing. That is unheard of in the third month, especially with VIX as high as it is. This means that the hedged strategy of “sell VIX and sell SPX” sets up very nicely, but one would most likely have to hold it until October expiration in order to see the premium dissipate, and holding that long involves too much “event risk.”

In summary, the market is once again trying for an upside breakout. Was the “trading range” respite enough to build up buying power once again, or will the market again exhibit its tired state? It seems that this time it may be trying for a more decisive upside move. We now have two longer-term buy signals (VIX crossing below the 200-day and the Cumulative A-D lines making new all-time highs).

In any case, the bulls remain in charge unless the S&P breaks down below support at 3,155.