There’s less cash available to push the market much higher 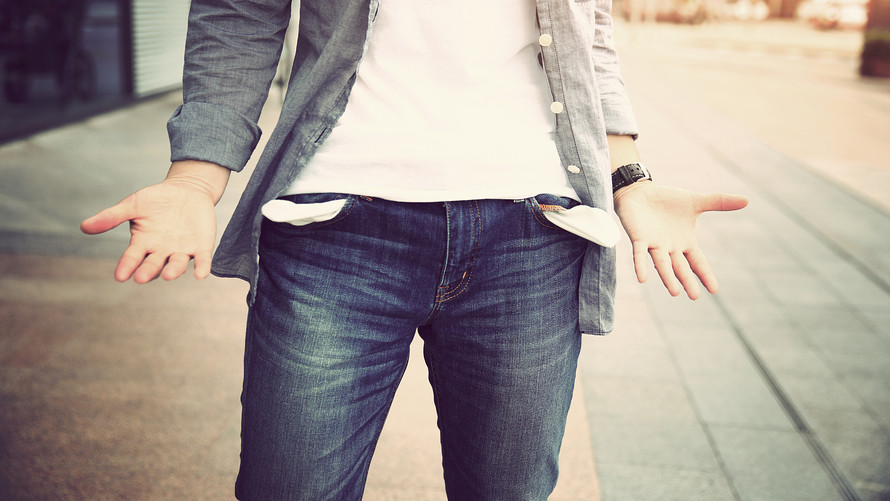 With the U.S. stock market hitting new highs lately, the question on everyone’s mind is, “What’s next?”

Based on a highly reliable predictor that the Federal Reserve periodically releases, the answer is: “Not much.”

I’ve previously published the projections of such luminaries as famed investor Warren Buffett and Nobel laureate Robert Shiller. Their formulas — and those of other experts — predict that the return of the S&P 500 /zigman2/quotes/210599714/realtime SPX +0.64%  in the next 10 years will be far below the market’s long-term averages, or even negative, based on today’s relatively high valuations.

But a decade is a long time. Given 10 years, you could produce an entire eight seasons of “Game of Thrones” or take on many other mammoth projects.

Five years is a shorter period that’s easier for us to comprehend. In less than five years, you could earn a college degree or fill a small house with ankle-biters.

So we may find five-year projections to be more practical. Unfortunately, the news isn’t too good.

Based on a formula that’s proven itself over the past 65 years, an analysis of the Fed data suggests that the S&P 500’s total return (including dividends) between now and the end of 2023 could be zero, as shown in the graph below. 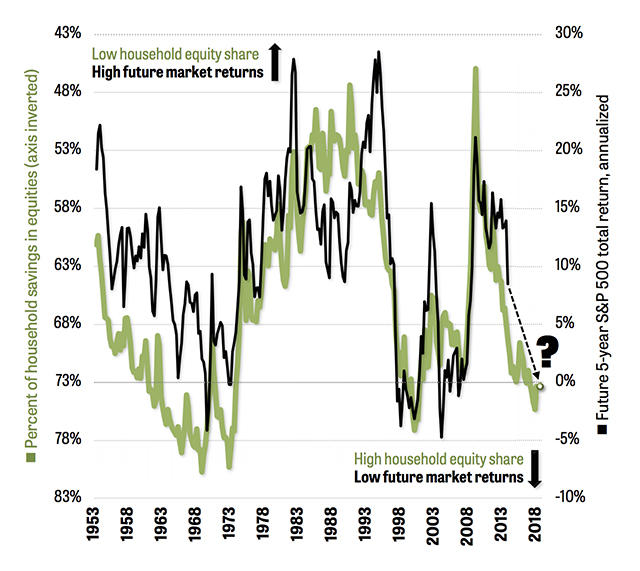 The graph plots the five-year total return of the market against a Fed statistic known as “Households’ Financial Assets and Liabilities.” (In its definition of “households,” the Fed includes some nonprofit organizations that serve families.)

The graph shows that the percentage of household liquid assets in stocks, ETFs, and REITs—as opposed to cash and bonds—has a close relationship to the returns of the stock market in the next five years. The fit isn’t perfect—if you find a formula that perfectly predicts the market, keep it to yourself, OK?—but the ups and downs of American households’ investments in stocks clearly show turning points in the S&P 500’s bull and bear phases.

In the green line, higher percentages of household investments in stocks are shown as lower readings (the left scale). In the black line, a higher percentage of stocks in people’s accounts is correlated with a lower five-year return of the S&P 500 (the right scale). My graph is based on raw Fed data provided to me by a private researcher, who asked not to be identified.

A return of around 0% in the next five years would be consistent with the statistic from the Fed. That would actually be a loss in real terms, after you subtract inflation.

My MarketWatch colleague Mark Hulbert recently examined this relationship in a June column. Since 1952, the Fed’s number has had a correlation of 91% with the return of the S&P 500 in the following 10 years, according to Philosophical Economics . In other words, the statistic explains or predicts 91% of the long-term moves of the S&P 500 — a very strong relationship.

Ned Davis Research (NDR) computes the correlation to be 89%. That’s almost identical and provides more evidence that the number has strong predictive value.

Ed Clissold, chief U.S. strategist for NDR, said in an interview: “Currently, household allocations to equities are higher than average, and that correlates with lower than average returns looking forward.”

He says there’s a good reason for the correlation: “By the time household equity allocations get high, most people have already put their money in, and there are fewer people left to buy.”

Another reason is that a rise in stock prices naturally lifts people’s allocations to equities. During a rally, a portfolio’s percentage in stocks grows, and the percentage in bonds declines. But after a long bull market, equities typically revert to a period of lower gains or even losses—a classic bear market.

None of these numbers mean the S&P 500 has peaked and will head down next week or next year. After all, the index could go up 3.5% a year for the next three years, and then down 5% in each of the next two years. That would give you roughly a 0% return. The Fed’s statistic indicates that the market is topping, but the actual process of exhausting people’s love affair with stocks can take years.

So what are individual investors supposed to do with all of this information? Sell their stocks and curl up in the fetal position?

Not at all. The simplest thing investors can do is rebalance their portfolios if they’ve gotten out of whack.

Let’s say your personal preference is to hold 60% stocks and 40% bonds—popularly known as “the pension model.” That’s not a bad portfolio. I showed in a column earlier this year that the Vanguard Balanced Index Fund /zigman2/quotes/206672542/realtime VBIAX +0.36% , which maintains a constant 60/40 ratio of stocks to bonds, has outperformed the S&P 500 (including dividends) over the past 18 years.

A new high in the S&P 500 means your equity share may have risen to 70% or 80%. Your portfolio is therefore more risky and vulnerable to a bear market than you’d like. If you haven’t rebalanced your portfolio back to your original percentages in the past year, now is a prime time to do so.

This column has been updated and revised with new sourcing .