The St. Louis lawyer who pulled a gun on protestors tells Chris Cuomo ‘my life has been ruined’

Mark McCloskey called the viral incident ‘terrorism,’ claiming protestors threatened to kill his dog and burn down his house 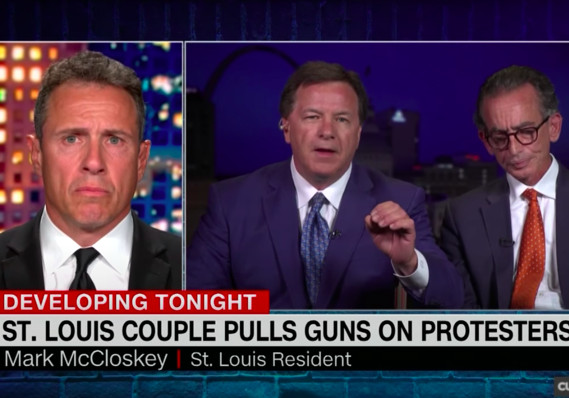 The St. Louis lawyer who went viral with his wife for pointing guns at protestors marching through his affluent gated community last weekend told Chris Cuomo that he’s the victim — and accused the demonstrators of terrorism.

“I was a person scared for my life, who was protecting my wife, my home, my hearth, my livelihood. I was a victim of a mob that came through the gate,” said Mark McCloskey, who appeared with his personal attorney on “Cuomo Prime Time” on Tuesday. “I didn’t care what color they were. I didn’t care what their motivation was. I was frightened. I was assaulted, and I was in imminent fear that they would run me over, kill me, burn my house.”

McCloskey and his wife, who are both personal-injury attorneys, were recorded standing on the steps of their mansion valued at more than $1 million last Sunday and waving guns at protestors, who said they entered the private community in an attempt to reach the mayor’s house to call for her withdrawal after she published the names and addresses of people in favor of police reform. Videos of the incident have been shared and viewed millions of times across Twitter /zigman2/quotes/203180645/composite TWTR -2.98%   and Facebook /zigman2/quotes/205064656/composite FB -3.51% , such as this clip from ABC News:

While Missouri’s Castle Doctrine makes it legal for residents to use lethal force to get people off of private property, according to the St. Louis Post-Dispatch , the St. Louis Metropolitan Police Department is investigating the incident, and the city’s Circuit Attorney tweeted that she is “alarmed” by the events, and her office is also looking into what happened.

When Cuomo asked McCloskey how he feels about “becoming the face of political resistance to the Black Lives Matter movement,” the lawyer called it “a completely ridiculous statement” and offered context for his aggressive response to the protestors, which he repeatedly referred to as a mob. He said the images of protests turning violent in St. Louis, such as a 7-Eleven getting burned down on June 2, spurred him to protect his property.

“Did anything happen? Yeah. My life has been ruined.”

Cuomo countered by calling terrorism “a strong word,” especially considering the McCloskeys were the ones who were armed. In response, McCloskey questioned the true intentions of the protestors, noting that the mayor doesn’t even live in his gated community. He accused the group of entering the neighborhood to be as disruptive as possible.

But when Cuomo repeatedly pressed on whether the protestors had actually hurt McCloskey, his wife or his property in any way, or whether the family had proof that the protestors were coming up the steps to their home and attempting to damage property, the lawyer declined to discuss the level of his private security on national TV.

“The reason why they did not get up my steps was that my wife and I were there with weapons to keep them off our steps,” he said. “They were coming at us until I displayed the weapon and that stopped them.” He also said that the marchers were “screaming death threats at me and threatening to burn down my house and kill my dog.”

Things got even more heated when McCloskey’s attorney, Albert Watkins, started giving long, filibustering responses to Cuomo’s questions — such as when the CNN host asked why President Trump would have retweeted one of the videos of the McCloskeys facing off with protestors.

To which Cuomo responded, “I don’t even know what the hell you’re talking about.”

Cuomo also took a shot at his Fox News rival Tucker Carlson, who interviewed McCloskey on the air before Cuomo did.

“Listen, I think I’m fair. I’m not going to use you as a pawn to advance my own agenda, like the show you just went on (“Tucker Carlson Tonight”), which is where somebody wants people to see Black Lives Matter as inimical to the American cause. I don’t make those kinds of judgments for people,” Cuomo said, adding that McCloskey has been “used and politically weaponized as a face of white resistance to that movement.”

“And that’s why I asked you that,” Cuomo said. “Not because that’s how you see yourself. But that’s how you are being seen. I wanted to give you a chance with counsel to respond to that. I don’t see that as an unfair question.”