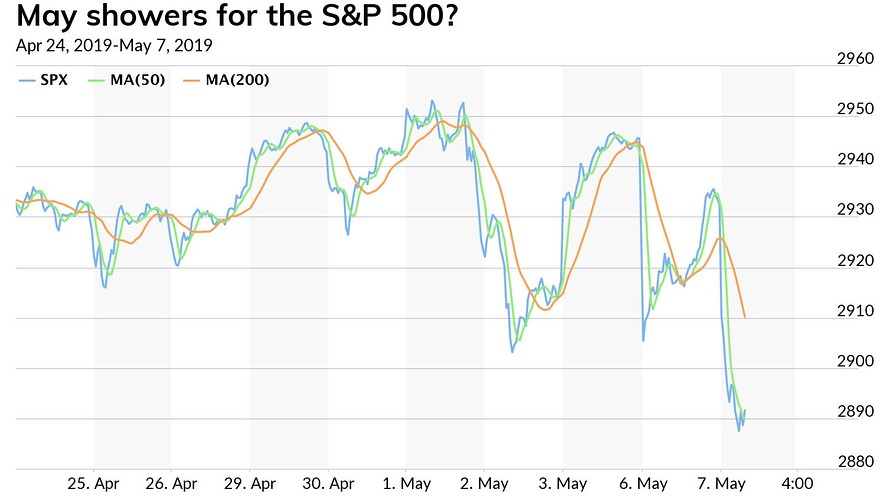 Sell in May and go away? Perhaps investors should have after the start to this month.

A somnambulant period that saw equities to or toward record territory appears to be over. It’s still early, but stocks are positioned for their worst month of this trading year.

Read: Sell the stock market in May and go away? Not so fast, say experts

The current slump in equities—while it may end up being a momentary pause on the escalator to further all-time highs—has assets perceived as risky looking at the worst drops since for a month since December, when a confluence of trade-war worries and an aggressive Federal Reserve combined to help contribute to the ugliest year since the 2008 financial crisis.

Markets bounded lower starting early Monday on the back of renewed fears of a Sino-American trade conflict. U.S. Trade Representative Robert Lighthizer cited “an erosion in commitments by China” in recent negotiations and declared tariffs on Chinese imports would rise to 25% from 10% on Friday, reiterating comments that President Donald Trump made on Sunday. However, China’s top trade negotiator Liu He is scheduled to participate in talks later this week, which is seen as a cause for some positivity.

“This turn of events injects substantial uncertainty into the outcome, forcing investors to now factor in the possibility that a near-term trade deal may not be reached and that tariffs may be increased. Given these developments, we expect significant volatility, wrote Kristina Hooper, chief market strategist at Invesco in a Monday financial blog .

Although, jitters on trade could abate as suddenly as they re-emerged, they are currently disrupting a market that had been in an unequivocal uptrend, with the S&P 500 /zigman2/quotes/210599714/realtime SPX +1.23% and Nasdaq Composite /zigman2/quotes/210598365/realtime COMP +0.17% indexes at or near all-time highs as recently as Friday.

Here’s how a fresh bout of volatility is shaping up on Tuesday:

Read : Opinion: Brace yourself for the coming spike in the VIX

The Cboe Volatility Index /zigman2/quotes/210598281/delayed VIX -0.53% , commonly known as the VIX and often referred to as Wall Street’s fear gauge, was on track for its biggest monthly gain, up 61%, since a 75% surge in October. The

The options-based index of expected volatility for the S&P 500 over the coming 30-day period, traded at an intraday high on Tuesday at 20.68, up about 8 points from Friday, and holding near its historic average after mostly trading beneath that level.

The VIX tends to move in the opposite direction of stocks because the index tends to reflect market bets on the likelihood of a sharp downturn in the market. Since the start of 2019, it has been mostly calm as equity benchmarks have attempted to reassert themselves at all-time highs

Crude-oil prices have traded on an upward trajectory in 2019, along with equity markets, with those assets sometimes viewed as investments that can prosper in an economic environment that supports steady growth and oil demand.

Currently, however, oil is having a rough patch, with the exchange-trade Energy Select Sector SPDR ETF /zigman2/quotes/206420077/composite XLE +2.78%  on pace for a 4.6% monthly retreat in May, which would be its worst month since a 13.3% plunge in December. The ETF is up around 10% for the year to date.

The United States Oil Fund LP /zigman2/quotes/203483736/composite USO +0.35% , which is off nearly 3% in May, is on track to snap a streak of four straight months in positive territory, following a nearly 11% December drop for the fund, which is closed pegged to oil prices. The fund, in line with oil futures, is up around 32% year to date.

The Dow Jones Industrial Average /zigman2/quotes/210598065/realtime DJIA +2.17% was off 530 points on Tuesday, with that decline, after Monday’s slip, putting the blue-chip index on track for its worst monthly skid, off 2.6%, since a 8.7% tumble back in December. Although, the Dow had lagged behind its benchmark peers, it had been close to its own Oct. 3 record before staging its current trade-inspired retreat.