The Supreme Court gave abortion-rights supporters a win, but those on both sides of the debate say the battle is far from over 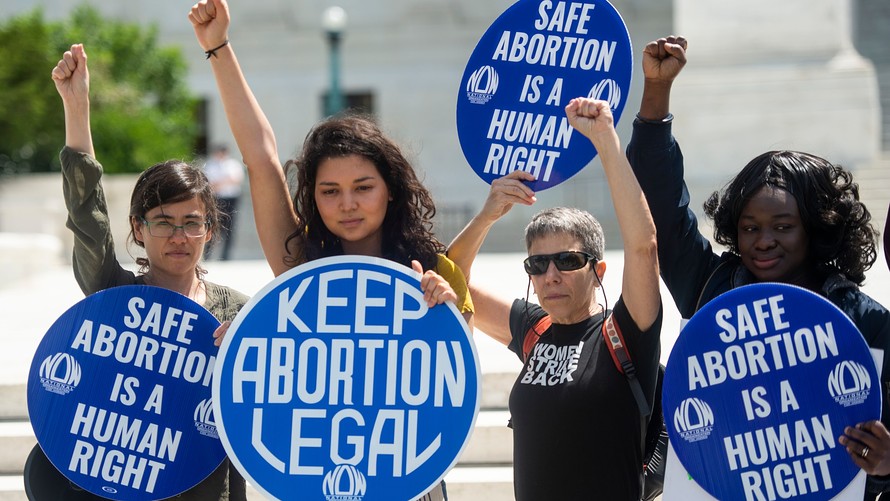 The Supreme Court last week struck down a Louisiana law requiring that doctors who provide abortions have admitting privileges at nearby hospitals. But abortion-rights advocates still see a number of challenges on the horizon, while those opposed to abortion see other potential victories ahead in their own work to reduce access to the service.

‘We need more Conservative justices on the U.S. Supreme Court.’

While he didn’t endorse the reasoning laid out in Justice Stephen Breyer’s plurality opinion, Roberts wrote in a concurring opinion that “the Louisiana law imposes a burden on access to abortion just as severe as that imposed by the Texas law, for the same reasons,” and noted that the legal doctrine of stare decisis called for treating like cases alike. He made clear, however, that he had joined the dissent in the 2016 Texas case and continued to believe it was “wrongly decided.”

While Democrats and pro-abortion rights organizations ultimately expressed relief at the ruling, many Republicans and anti-abortion groups denounced it.

Marjorie Dannenfelser, the president of the anti-abortion group Susan B. Anthony List, called the ruling “a bitter disappointment.” “It demonstrates once again the failure of the Supreme Court to allow the American people to protect the well-being of women from the tentacles of a brutal and profit-seeking abortion industry,” she said in a statement.

Vice President Mike Pence tweeted /zigman2/quotes/203180645/composite TWTR -0.46% , “After today’s disappointing decision by SCOTUS, one thing is clear: We need more Conservative justices on the U.S. Supreme Court. #FourMoreYears.” And White House Press Secretary Kayleigh McEnany said the court had “devalued both the health of mothers and the lives of unborn children” in its ruling.

‘There are 16 cases that are just one step away from the Supreme Court.’

“States have legitimate interests in regulating any medical procedure — including abortions — to protect patient safety,” McEnany said in a statement . “Instead of valuing fundamental democratic principles, unelected Justices have intruded on the sovereign prerogatives of State governments by imposing their own policy preference in favor of abortion to override legitimate abortion safety regulations.”

Abortion-rights supporters, meanwhile, expect more challenges to abortion access in the months to come, while anti-abortion groups see these same issues as opportunities.

Talcott Camp, the chief legal and strategy officer for the National Abortion Federation, a professional association of abortion providers, pointed to the Supreme Court’s “splintered decision” in the latest case and said advocates would “need to be mindful of how to defend the right going forward.”

“While the court case was a relief to me as someone who provides abortion care, I’m still very worried about the ongoing restrictions and potentially future barriers,” added Jody Steinauer, an OB-GYN and the director of the University of California, San Francisco’s Bixby Center for Global Reproductive Health.

With the general election just four months away, here are some potential obstacles in the months ahead weighing on the minds of abortion-rights supporters, and milestones that anti-abortion campaigners are pinning some hope on in their own efforts to reduce access to women who seek terminations of pregnancies across the U.S.:

There were 16 abortion-related cases before U.S. appeals courts as of June 10, according to Samuel Lau, a spokesman for the pro-abortion rights Planned Parenthood Action Fund. And while the June Medical Services ruling might have favored abortion rights, no one has a crystal ball for how the court will decide in future abortion cases, he said.

“Many other restrictions remain in place around the country, blocking access to safe and legal abortion, and there are 16 cases that are just one step away from the Supreme Court,” Lau told MarketWatch.

Dannenfelser and other anti-abortion advocates can find their own silver lining in the ruling. For instance, Roberts’s opinion also rejected the notion of considering an abortion law’s medical benefits to patients alongside the burdens it would pose — a “balancing test” applied in Whole Woman’s Health — and argued that courts should consider only the burdens . “The only question for a court,” he wrote, “is whether a law has the ‘effect of placing a substantial obstacle in the path of a woman seeking an abortion of a nonviable fetus.’”

‘This is certainly not a hearty reaffirmation of Whole Woman’s Health.’

Daniel Grossman, a professor of obstetrics, gynecology and reproductive sciences and director of the research group Advancing New Standards in Reproductive Health (ANSIRH) at UCSF’s Bixby Center, said he believed this was where advocates’ concerns lay: “This is certainly not a hearty reaffirmation of Whole Woman’s Health ,” he said, adding that, on the contrary, it “seems to signal to lower courts and to legislatures that some restrictions that may not have too much benefit, so long as they don’t present too much of a burden, might be found to be constitutional.”

The chief justice “clearly felt bound by precedent,” added Mary Ziegler, a Florida State University law professor and author of the forthcoming book “Abortion and the Law in America: Roe v. Wade to the Present.” The landmark 1973 abortion-rights ruling Roe v. Wade is precedent too, she noted, “but it’s also true that Roberts made no bones about being skeptical about abortion rights.”

“Exactly how those two things fit together remains to be seen,” she said. In all likelihood, Ziegler added, “there will be more abortion restrictions that the court will uphold with Roberts as its swing vote.”

Potential clinic closures due to COVID-19

In the early weeks of COVID-19’s spread throughout the U.S., officials in several states such as Texas, Ohio and Mississippi moved to suspend abortions after deeming the procedures nonessential and, in some cases, citing the need to conserve personal protective equipment.

In the early weeks of COVID-19, officials in several states, such as Texas, Ohio and Mississippi, moved to suspend abortions, deeming them nonessential.

Grossman, meanwhile, noted that “very little personal protective equipment is used in an abortion,” especially in comparison to the amount that would be used if a patient decided to continue the pregnancy.

‘Saying that is not an essential service and having those clinics closed is an undue hardship on people.’

Marcela Howell, president and CEO of the policy initiative In Our Own Voice: National Black Women’s Reproductive Justice Agenda

Marcela Howell, the president and CEO of In Our Own Voice: National Black Women’s Reproductive Justice Agenda, which supports abortion rights, agreed that the time-sensitive nature of abortion made it an essential health-care service. “For people who are of low income, Black women, young people [and] other women of color who have to get abortion care immediately, saying that is not an essential service and having those clinics closed is an undue hardship on people,” she told MarketWatch.

Most of these bans, which abortion-rights advocates criticized as a pretense to shut down abortion care, have been either lifted or blocked by court order . But advocates fear they could crop up again as coronavirus cases surge in some states.

“We know that from the first explosion of the pandemic in this country in mid-March and into April, that states that want to shut down care use the pandemic as an excuse to do so,” Camp said.

Restrictions on medication abortion and telemedicine

The Food and Drug Administration currently only allows mifepristone, one of the two drugs typically used in a medication-abortion regimen , to be “dispensed in certain health-care settings, specifically, clinics, medical offices, and hospitals, by or under the supervision of a certified prescriber.” That means it can’t be mailed directly to patients or obtained from retail pharmacies, despite concerns of COVID-19 exposure.

Several states effectively deny telemedicine abortion advice either through an explicit ban or by requiring a prescribing clinician to be physically present.

“During the pandemic, when we’re using telemedicine in all other areas of medicine, it would make sense to use it also to provide medication abortion — and the FDA’s restriction on dispensing mifepristone requires patients to come into a facility to get the drug,” Grossman said. “Particularly during the pandemic, this limits the ability of clinicians to provide the safest option of care for their patients.”

The American Civil Liberties Union filed a federal lawsuit in May on behalf of ACOG and other reproductive-health organizations to challenge the FDA’s requirement. Meanwhile, 18 states effectively deny telemedicine abortion either through an explicit ban (five states) or by requiring a prescribing clinician to be physically present (13 states), according to a recent analysis by the Kaiser Family Foundation , a health-care think tank.

“The challenge of providing abortion care in the pandemic is going to be with us for a while,” Grossman said.

Attempts to put anti-abortion measures on the ballot in some states have proved unsuccessful . But one, which will appear on Louisiana’s ballot in November , would change the state constitution so that it would not protect abortion rights or provide any abortion funding. The other ballot initiative, in Colorado, seeks to ban abortion after 22 weeks into a pregnancy.

“Ballot initiatives have been percolating in 2020, and we have a couple that are on the ballot,” said Elizabeth Nash, the interim associate director of state issues for the Guttmacher Institute, a reproductive-health think tank that supports abortion rights.

Presumptive Democratic presidential nominee Joe Biden, previously a longtime supporter of the Hyde Amendment, now says he would repeal it if elected.

Meanwhile, Ziegler said she is watching laws that focus on banning abortion at or after the 20th week of pregnancy based on the theory that fetal pain is possible, as well as bans on dilation and evacuation, the most common second-trimester abortion procedure.

These strategies build on “the last big win for abortion opponents,” the 2007 Supreme Court decision Gonzales v. Carhart , which upheld a ban on so-called partial-birth abortion and “held that when a matter is scientifically uncertain, lawmakers have more room to maneuver,” according to Ziegler.

The impact on people of color and low-income women

Three in four women who obtained abortions in 2014 were poor or low-income, according to the Guttmacher Institute , and more than half of abortion patients were women of color: Black women made up 28% of abortion procedures that year, while Hispanic women made up 25%.

“The harshest impact of all of these restrictions is on communities of color and particularly Black and brown folks seeking care,” Camp said. “Those communities are already facing such disparities on all axes — income, housing, education, health care, interaction with the criminal justice system.”

The Hyde Amendment, first implemented in 1977, is also chief among Steinauer’s concerns. The amendment, which bars the use of federal funds for abortion for Medicaid recipients except in cases of rape, incest or the woman’s life being in danger, “really can cause harm, especially for poor people who don’t have other means to access the care,” she said.

“Certainly related to the pandemic and the recession, more people are going to be in that situation where they have limited financial resources to pay for this health-care service,” Grossman added. “Even if they are on Medicaid, they’ll find that Medicaid won’t cover the service unless they’re in one of the small numbers of states where people can use Medicaid funding to pay for the abortion.”

“Our poor patients can’t access abortion care as one of the options available to them in pregnancy,” Steinauer said. “They’re forced to either scrape the money together themselves or to not have the abortion.”

A 2019 study led by ANSIRH researchers shed light on the impact of the Hyde Amendment in Louisiana, finding that “for a substantial proportion of pregnant women in Louisiana, the lack of Medicaid funding remains an insurmountable barrier to obtaining an abortion.”

Presumptive Democratic presidential nominee Joe Biden, previously a longtime supporter of the Hyde Amendment, reversed his stance on the matter last year. But a Politico report published Friday suggested that House Democrats planned to hold off on stripping the amendment in the near future, given the timing of the election.