The U.S. is the No. 1 most generous country in the world for the last decade

A global survey asked 1.3 million people whether they had helped a stranger or donated money or time to charity recently 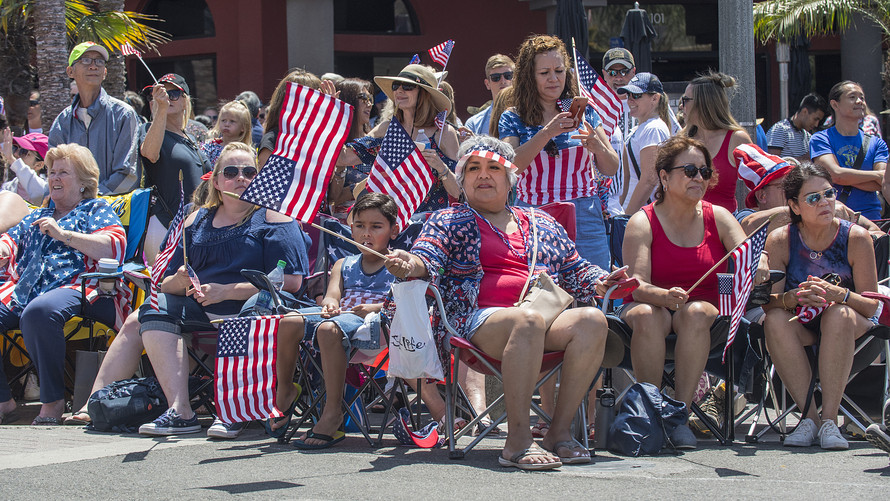 Mark Rightmire/MediaNews Group/Orange County Register via Getty Images
The United States of America ranked No. 1 on a global measurement of the most generous countries.

The United States has been the most generous country in the world over the past decade.

That’s the conclusion of the World Giving Index , a ranking that measured how likely residents of 128 countries were to practice acts of generosity.

The index, from the U.K.-based nonprofit Charities Aid Foundation, is based on Gallup’s World Poll surveys of 1.3 million people.

Between 2009 and 2018, interviewers asked respondents whether they had done the following in the last month: helped a stranger or someone they didn’t know who needed help, donated money to charity, or volunteered their time to an organization.

At the top of the list were the U.S., Myanmar and New Zealand. The countries that scored the lowest were Yemen, Greece and China.

The U.S. peaked on the World Giving Index in 2014, but has declined since then. The report authors called this a “worrying trend” that’s also happening in other developed countries. 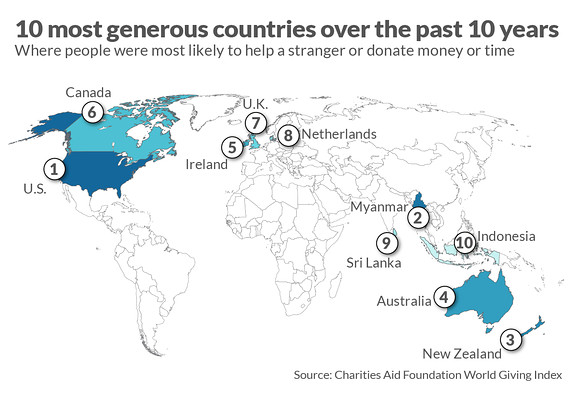 Giving in the U.S. has declined

While charities in the U.S. took in $427.71 billion in 2018 — an increase in total dollars from 2017 — giving by individual Americans dropped by 1.1%, a June 2019 Giving USA report found. The overall amount given to charity increased because donations from corporations and foundations — the charitable entities often established by wealthy families — increased by 5.4% and 7.3% respectively in 2018.

The World Giving Index report’s authors said they would monitor how the U.S.’s 2017 tax overhaul affects Americans’ donations to charities, because many have stopped claiming tax deductions for their charitable donations.

Both rich and poor countries are generous

“There is no one trait that points to a country’s generosity,” the World Giving Index authors said. The highest scoring countries “represent a wide range of geographies, religions, cultures and levels of wealth,” they noted.

While seven of the top 10 countries are among the wealthiest in the world, some are much less affluent: Myanmar, Sri Lanka and Indonesia are all classified by the United Nations as lower-middle-income countries, they said.

Cultural factors appear to play a role. Both Myanmar and Sri Lanka have many practitioners of Theravada Buddhism , “for whom small, frequent acts of giving to those living a monastic lifestyle are the norm,” the authors noted.

Several African nations — including Liberia, Sierra Leone, Kenya and Zambia — topped the list of countries where people were most likely to help a stranger, which the authors said could be linked to the African philosophy of ubuntu, which promotes caring and community .

Americans say they want to give more

Despite a record-low unemployment rate and growing economy, 56% of Americans say income constraints keep them from giving more money to charity, a separate survey said.

Two out of three Americans donated to charity within the last year, a recent nationally representative LendingTree survey of 1,079 Americans found.

Some 71% said their debt prevents them from donating as much as they’d like. The average debt-carrying household in 2018 had roughly $144,100 in debt, LendingTree said.