‘Do we cheer it or jeer it?’Wells Fargo’s Bullard in ‘optimistic’ camp 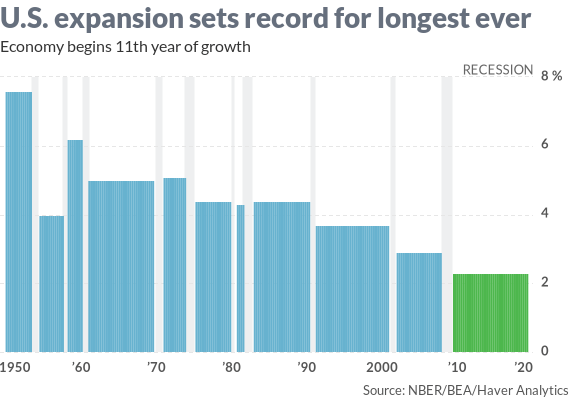 It hasn’t been all sunshine, however. The expansion has taken awhile to get going and has been somewhat uneven. While unemployment has fallen to a 49-year low of 3.6%, the pace of the current expansion is the slowest in the modern era.

Gross domestic product, or GDP, the yardstick of economic growth, has averaged just 2.3% since the U.S. exited recession in mid-2009. And for the first time since WWII, the economy has failed to reach 3% annual growth in any single calendar year. 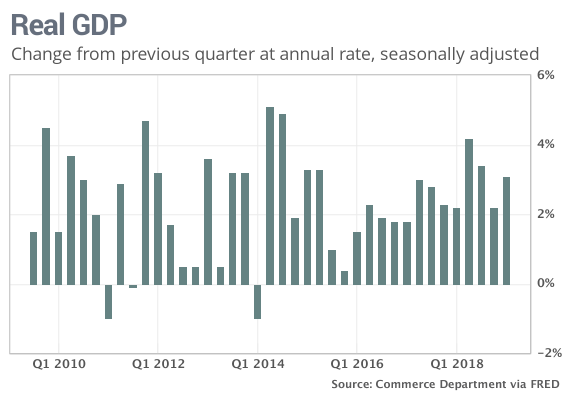 “We didn’t get the usual snapback in overall economic growth that we normally have after exiting recession and entering expansion,” said senior economist Sam Bullard of Wells Fargo Securities. “Normally you have 4% growth for a while.”

Opinion: This expansion may be the longest, but it’s not the best — so far

Still, economists have long debated the reasons for the less-than-stellar economic rebound, but the truth is the U.S. economy has grown slower and slower each time a new expansionary phase has restarted. The trend goes back decades.

Read: The economy is not on thin ice, but another poor jobs report will amp up the anxiety

Some strategists and economists contend there’s reason to be upbeat about a more subdued expansion. The thinking is that a roaring expansion might lead to a more severe recession, while a period of slower growth is unlikely to generate the imbalances that tend to accompany a rip-roaring economic boom.

“Do we cheer it or jeer it? I’d be more optimistic,” Bullard said. “Economic conditions haven’t created the excesses that suggest the next downturn is imminent.”

Indeed, the biggest risk to the economy right now is political: President Donald Trump’s tough stance on trade with China, Mexico and other countries has unsettled both the domestic and global economies.

“Our increasing fear is that current trends will weaken the global economy, influencing our ability to grow in 2020 and beyond,” a senior executive at a maker of fabricated-metal products told the Institute for Supply Management in a survey of manufacturing firms.

The most recent ISM manufacturing survey showed a slide to 51.7% in June from 52.1% in the prior month, reflecting that manufacturers grew at the slowest pace in more than two years on the month, hurt by the U.S. trade tensions. A reading of at least 50 indicates improving conditions.