The wristwatch’s time isn’t up

Why Rolex is unconcerned about Samsung’s smartwatch

Time used to be all in the wrist. But these days, thanks to smartphones, cable boxes, computer windows and other screens, no one really needs to wear a watch. The hour is always at hand. 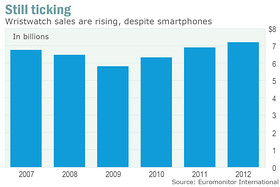 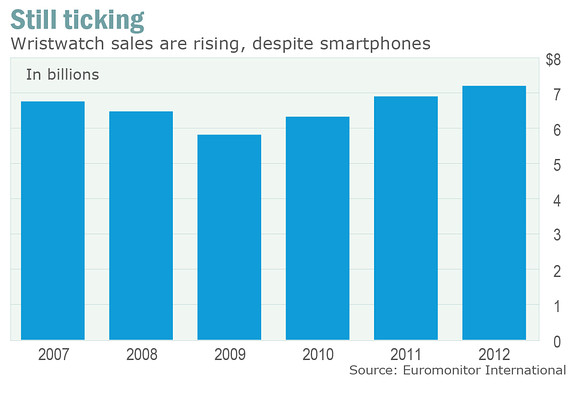 Samsung /zigman2/quotes/209800866/delayed KR:005930 -2.41%   /zigman2/quotes/202367843/delayed SSNLF 0.00%   is making a big push into the smartwatch market this week, when it is expected to present its “Galaxy Gear” at the consumer electronics show in Berlin. In July, Apple /zigman2/quotes/202934861/composite AAPL -0.29%   trademarked the name iWatch and is hiring developers to design a smart timepiece seems to only confirm the sense that the traditional watch is doomed. But even though watches are becoming technologically superfluous, the watch industry is actually growing, analysts say. Sales may have fallen 4% in 2008 and an additional 10% in 2009 to $5.8 billion, but since then the watch’s fortunes have reversed, according to Euromonitor International. Last year, U.S. sales rose to $7.2 billion, and analysts say the industry expects that growth to continue.

As for the iWatch and competing smartwatches from the likes of Samsung and others, the industry seems to give such threats barely a second’s thought. In fact, watch sales are predicted to increase another 30% by 2017, according to Euromonitor.

The watch owes its staying power to luxury brands like Rolex, analysts say. High-end timepieces (those with retail value of $1,000 or more) are now being sold for $2,500 on average, a number that hasn’t been seen since before the recession, says Liz Chatelain, president of MVI Marketing, a research and development firm that specializes in the gem, jewelry and watch industries.

The growth has been surprising, especially for analysts who just six or seven years ago predicted the watch industry’s demise, Chatelain says. Wearing a watch was deemed not only unnecessary but uncomfortable for tasks such as typing on a keyboard, she says. 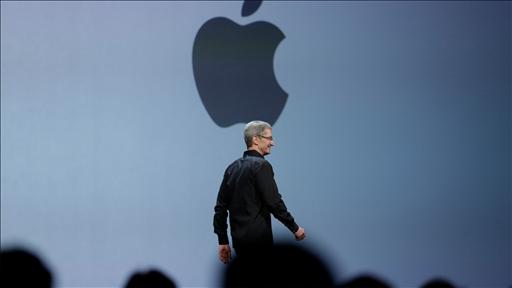 But rather than ditching watches altogether, consumers seem to have consolidated and upgraded. Now, instead of owning multiple watches (one for evening, one for everyday, one for sports), people may be more likely to invest in a single watch.

Do-it-all watches from brands like David Yurman, TAG Heuer, Movado and Omega have performed well in the past several years for this reason, Chatelain says. Plus, the rising cost of metals has made the watches more expensive, which could account for some of the industry growth, she says.

So where would the Samsung “Galaxy Gear” or iWatch fit in?

The average price consumers are willing to pay for a watch today, taking into account all models, “from Wal-Mart to Tiffany’s,” Chatelain says, is $290. But those interested in purchasing an iWatch — which could become an extention of the iPhone or iPad — would likely be willing to pay more, she predicts.

For these reasons, the product category that the launch of an iWatch or similar device would probably have the greatest impact on is other digital watches, or those with cross-functionality, says Robert-Jan Broer, the director and founder of Chronolytics, a company that analyzes information about the luxury watch market. 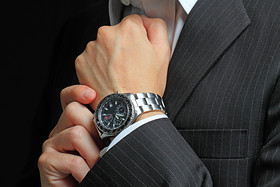 If the iWatch is lightweight and sporty enough, yet also useful for the office, it could become an all-purpose watch, Chatelain says.

It also seems that Samsung intends for its “Galaxy Gear” to be a complementary device to its Galaxy smartphones.

That may be where, for now, these devices are heading, says Jeff Kagan, a technology analyst. It makes sense to produce smartwatches that connect to a phone -- still allowing the user to send text messages, see sports scores and a variety of other tasks -- rather than a network. The devices would synchronize and the phone itself would be used less often.

Apple may be more likely to pull this off than its competitors, says Scott Steinberg, a strategic innovation consultant for TechSavvy Global. “I’m not entirely sure a smartwatch would be a phone replacement unless it’s made by Apple,” he says.

Yet Broer says this type of smartwatch should not impact consumers who are interested in more expensive, mechanical watches from luxury brands like Rolex or Swatch Group.

According to his analysis, there is a distinct difference between consumers interested in smartwatches, and the more bling-conscious individuals interested in luxury mechanical watches. The latter buy “ for entirely different reasons than being practical,” he says.

Maria LaMagna is a MarketWatch reporter in New York.

Get news alerts on Samsung Electronics Co. Ltd. and Apple Inc. — or create your own.