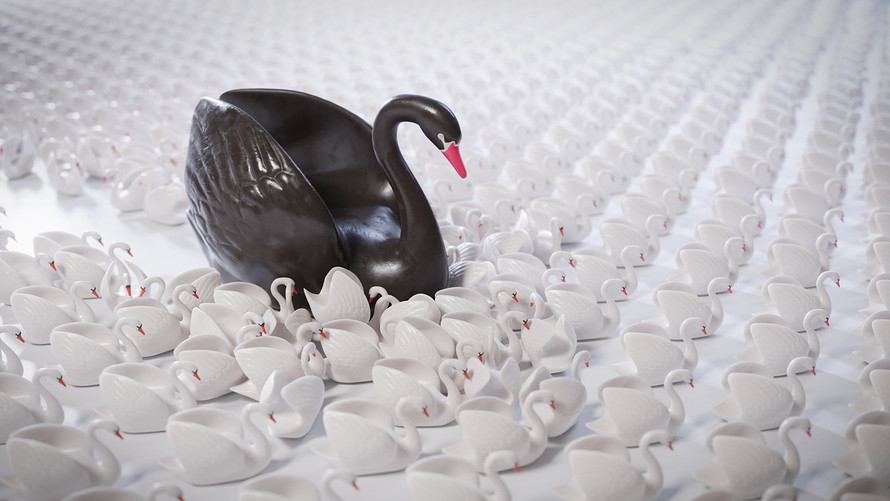 iStockphoto
And the biggest “black swan” is...

That’s how Mark Spitznagel, the founder of Universa Investments, described his approach to navigating market risk in an interview with Vanity Fair that published Thursday. Basically, he says he makes far out-of-the-money bets that cost little but deliver huge when it all comes crashing down.

“Really explosive downside protection is really the only risk mitigation that’s able to move the needle for people, because it’s the only risk mitigation that doesn’t cost you as you are waiting for it to happen,” Spitznagel said. “When the market crashes, I want to make a whole lot and when the market doesn’t crash, I want to lose a teeny, teeny amount. I want that asymmetry... that convexity.”

In other words, his fund provides crash insurance so his clients can take on more “systemic risk” with their other investments.

Spitznagel, a former trader, is a protégé of Nassim Nicholas Taleb, the author of the 2007 bestseller, “The Black Swan,” which is a metaphor used to describe unpredictable, highly disruptive events — the kind that could blow up markets.

Right now, stocks, with the Federal Reserve winds blowing at their backs, are “distorted” and “no longer tethered to fundamentals,” Spitznagel warns, and that makes for those chasing returns extremely vulnerable.

“These monetary distortions lead to this reckless reach for yields that we are all seeing,” he said. “Randomly go look at a screen and it’s pretty crazy. Big caps, small-caps, credit markets, volatility; it’s crazy. Reach for yield is everywhere.”

Spitznagel explained to Vanity Fair that, at this point, central bankers have lost control and don’t know how to right their wrongs.

“They will never be able to ‘normalize’ rates,” he said. “In our lifetime, recessions and stock market crashes really have been instigated or started by central banks sort of pulling away the punch bowl. They raise rates and that has led to a slowdown and ultimately has led to these crashes that we see.”

“They realize that global economies are in a situation now where central banks can’t pull away,” he said. “And they’re bluffing if they say they can.”

Spitznagel doesn't predict when an inevitable downturn will hit, but when interest rates start rising on their own, “it won’t be pretty,” he said.

But what if that panicky “black swan” event never comes? What if this is the new normal? Of course, it’s not, but what if?

“I don’t need the markets to ever crash again,” Spitznagel said. “I’d be pretty hunky-dory if there’s never a crash again and that, from now on, every year looks like last year or the last 5 years or the last 10 years. I’d be just fine with that.”

No crash happening yet, though the Dow Jones Industrial Average /zigman2/quotes/210598065/realtime DJIA +0.62% was down in Thursday’s trading session.