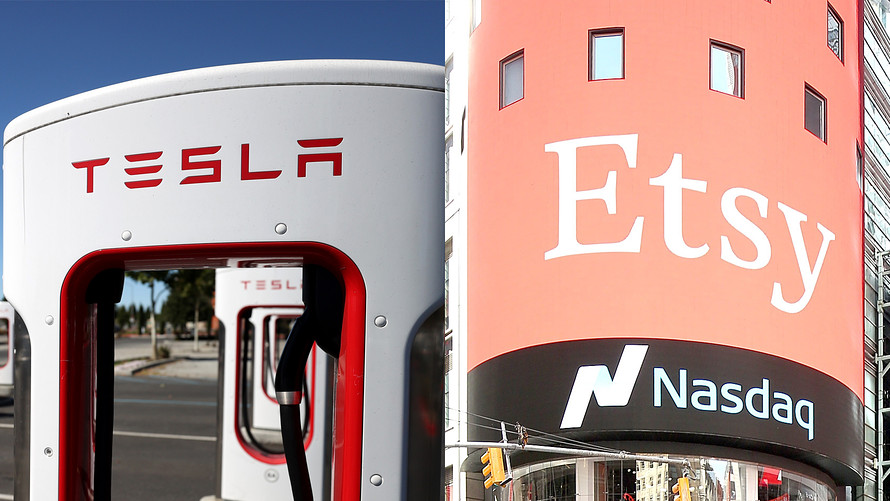 Getty Images
Shares of Tesla have skyrocketed nearly 700% during 2020, while Etsy’s stock has more than tripled.

The pandemic year of 2020 was a surprising one for the stock market as the broad indexes crashed in March, only to roar back as unprecedented stimulus from the federal government and the Federal Reserve drove a tremendous amount of money into equities, even as the economy was reeling.

Honorable mentions, plus Tesla and a warning

Before going to the broad indexes, it’s important to note that many of this year’s highest flyers aren’t part of the S&P 500 or the Nasdaq-100 Index — or at least not yet. For the Nasdaq-100, it takes time to rebalance the index to bring the largest companies in the Nasdaq Composite Index (NASDAQ:COMP)  into the smaller subset. Here’s a list of 15 stocks that aren’t yet included in SPX or NDX but soared during 2020.

To gain entry to the S&P 500, a company’s “most recent quarter’s earnings and the sum of its trailing four consecutive quarters’ earnings must be positive” and it must also meet other requirements , according to S&P Global.

But Tesla’s addition to the S&P 500 following five quarters of positive earnings has raised what may be a red flag for some investors. In a note to clients on Dec. 24, Jefferies analyst Christopher Wood pointed out that when Tesla was added to the S&P, its market capitalization was greater than the combined stock-market values of Toyota, Volkswagen (ETR:XE:VOW)   (OTC:VWAGY) , General Motors Co. (NYS:GM) , Ford Motor Co. (NYS:F) , Honda Motor Co. (NYS:HMC)  and Nissan Motor Co. (OTC:NSANY) . Wood added that all those firms were “busy spending serious amounts of money in electric vehicles, lured by various incentives, be they subsides or fines.”

Here’s the kicker: Wood wrote that as far as he could tell, “Tesla only generates profits at present by selling tax credits,” which are payments to Tesla by other auto manufacturers who make too few electric vehicles to satisfy regulators. Wood continued: “So in this respect, as noted in an excellent article in The Wall Street Journal in August, the irony is that Tesla is worth more than most of the industry it relies on for the subsidies that are the only reason it has been able to report five consecutive quarters of profits .” (The italics are mine.)

More on Tesla and credits: Tesla plays smoke and mirrors with profits again

However, Amazon and Apple made the list of top 20 Nasdaq-100 performers, and Apple topped the Dow 30 components. Here’s how the other FAANGs performed in 2020:

The S&P 500 rose 16.3% in 2020. (All price changes in this article exclude dividends.) Here are the 20 components of the benchmark index that showed the biggest gains:

Click on the tickers for more about each company, including news coverage, profiles, price ratios, ratings and charts.

The Nasdaq-100 leapt a whopping 47.6% in 2020, while the full Nasdaq Composite Index rose 43.7%. Like the S&P 500, the Nasdaq and Nasdaq-100 are weighted by market capitalization, which means big tech names have driven the indexes’ strong performance.

By comparison, the Dow Jones Industrial Average added a relatively paltry 7.2% in 2020. Three changes were made to the 30-stock index on Aug: 31:

Here’s how all 30 current components of the Dow performed in 2020:

Don’t miss: 20 of analysts’ favorite large-cap stocks for 2021, including GM, Facebook and Salesforce