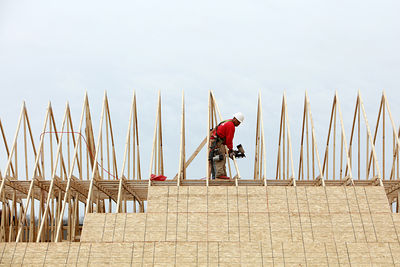 Bloomberg
Lennar Corp. is rated a ‘buy’ or equivalent by 17 of 21 analysts polled by FactSet.

What a difference a few months can make.

During 2018, and especially during the fourth quarter, investors were concerned about rising interest rates and were beginning to fear that a recession was looming. Mortgage-loan interest rates were rising. All this caused a predictable plunge in share prices for most home builders.

But 2019 so far has been a different story, and there are signs the upward path for this industry will continue.

This chart shows weekly price movement for the S&P Composite Index’s homebuilding subsector since the end of 2017: 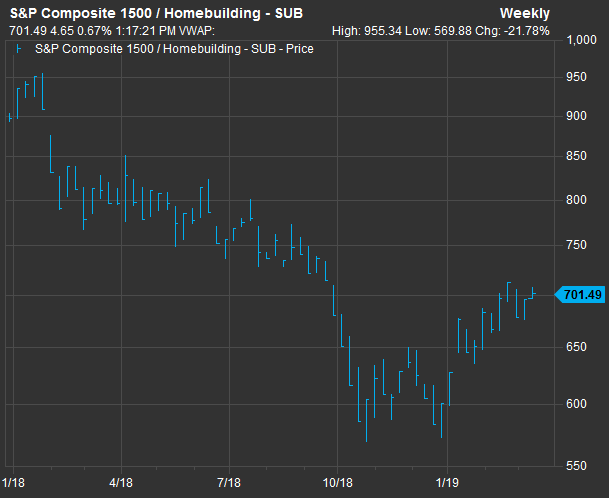 Here’s how shares of the 13 home builders in the subsector have performed this year and last year:

During a phone interview on March 15, Alvaro Lacayo, vice president of equity research at Gabelli & Co., said home builders started 2018 with “a good order season, but as rates started to rise in September and October, there were concerns.”

Investors’ macroeconomic concerns shifted from a rate-driven slowdown for housing to fear of a recession, Lacayo said. “Because this is a very cyclical sector, it magnified the selloff,” he added.

You can see from the first chart that despite a sharp rally so far this year, the homebuilding subsector isn’t close to where it was a year ago.

But industry sentiment is strong, according to the latest National Association of Home Builders’ monthly confidence index.

Last year, the Federal Open Market Committee raised the federal-funds rate four times to its current target range of between 2.25% and 2.50%. On Jan. 30, Federal Reserve Chairman Jerome Powell reversed course, saying the economic signals for further increases in interest rates had “weakened” and that the central bank might adjust or stop the reduction of its balance sheet, which has been taking liquidity from financial markets.

Those actions helped lead to a decline in mortgage rates, which seems to be providing a bounce for the homeuilders. Here’s how the national average rate for 30-year mortgage loans has fluctuated over the past year, according to Freddie Mac data: 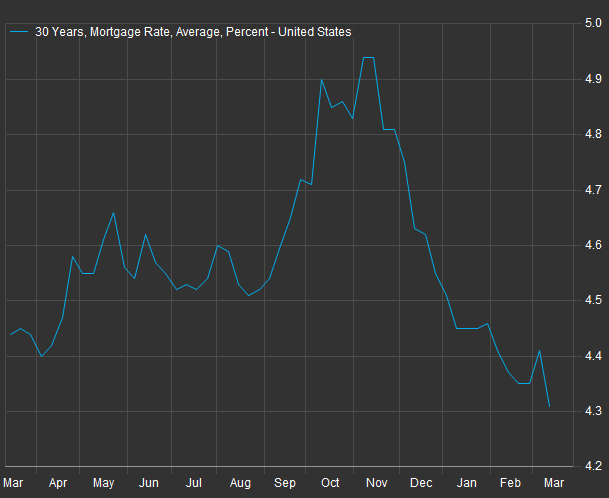 So 30-year mortgage loan rates are even lower than they were a year ago.

Home construction permit volume “started having pretty ugly numbers in November and December, and rebounded in January. What you see now is sentiment going from macro recession, with [construction] starts down meaningfully, to the sentiment that we will have moderate growth in 2019, Lacayo said.

U.S. housing starts were up a seasonally adjusted 18.6% in January from a year earlier, while permit volume increased 1.4%.

“Tangible book value tends to be a reliable floor” for homebuilder stocks, Lacayo said. “The only time they broke book value [as a group] was in 2008.”

For home builders, book value is generally the value of “inventory,” or the land the company has purchased to build on, Lacayo explained. Tangible book value subtracts goodwill, which is a noncash item that represents the premium paid if a builder acquires a competitor.

Looking at most of the stocks’ valuations, it would appear that late last year investors were expecting a 2008-like residential real-estate crisis. Even now, valuations are much lower than they were at the end of 2017.

Annual home price appreciation “has been 5% to 6% the past five years. Now you see it moderating at 4%,” Lacayo. He called this level sustainable, because of improved affordability indicated by the extraordinary improvement in U.S. wage growth to 3.4%.

Lacayo publishes research on building-products companies, home-improvement retailers and home builders. He has a neutral rating on TRI Pointe Group (NYS:TPH) , which is on the above list. He has “buy” ratings on Home Depot (NYS:HD)  and Lowe’s (NYS:LOW) .

When asked which of the homebuilder stocks listed here he favors, he named Lennar (NYS:LEN) , although he doesn’t publish research on this company. “They are coming off their acquisition of CalAtlantc last year. This allows them to capture synergies, which should support their overall profits. This also gives them a larger market share in major metro areas. You also have a best-in-class management team,” he said.

Here’s a summary of sell-side analyst opinion about all 13 home builders, sorted by percentage of “buy”or equivalent ratings:

As always, if you see any companies listed here that interest you, it’s important to do your own research and form your own opinion about whether now is the time to buy the stock.